At least as far as aluminum is concerned, the president’s tariff strategy is in tatters, a recent Reuters article suggests.

But now smelters are being idled and output is falling again.

Alcoa will curtail 230,000 tons of operating capacity at its Washington state smelter, while the future of other smelters has to be in doubt as prices remain uncompetitively low and imports continue to flood in.

Before you point to the demand destruction due to COVID-19 induced lockdowns, this process was going on before the virus.

The article suggests tariffs have done nothing to reduce U.S. import dependency, saying although imports of primary aluminum were steady last year at 4 million tons — down by just 86,000 tons from 2018 — imports of aluminum in semi-manufactured form have surged. 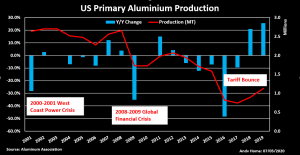 Demand for semis has spurred imports of plate, sheet, and strip in particular (up 12% to 1.30 million metric tons). That process of lower domestic primary metal and an increasing percentage of imports is likely to have simply been made worse by the pandemic.

“The Commerce Department has granted tariff exclusions for huge volumes of aluminium can stock, plate, sheet, foil and other products – far exceeding historical import volumes and U.S. market demand,” the article advises, quoting Aluminum Association findings. The U.S. market for can-sheet, for example, is about 3.8 billion pounds per year but almost 5.0 billion pounds of exclusions have already been granted for 2020.

Not surprisingly, domestic prices have been severely depressed, and consumers are incentivized to buy imported, tariff-free or tariff-exempt material over domestic.

Unlike many other metals, the supply market for aluminum has not been hit by the pandemic. Global aluminum production was actually up 2% over the first three months of 2020; the market is in a distressingly high surplus.

In China, state governments are resurrecting stockpiling programs previously rolled out in 2009 in response to the financial crisis, in 2012-13 and the demand trough in 2015-16, a separate Reuters article notes.

Both local governments and federal agencies such as the SRB in China have openly manipulated the market in the past to support prices by announcing they are buying hundreds of thousands of tons of metal and stating the price paid was at a premium to the SHFE market price to dissuade investors from shorting the market.

The expectation is they will do so again despite China being in surplus and new smelters, such as Wenshan Aluminium’s 500,000 mt per year coming onstream this year, adding further to the oversupply.

Tackling China’s oversupply and market-distorting exports is a tough proposition, but tariffs, once seen by some as the answer, do not seem to be working.