The Construction Monthly Metals Index (MMI) picked up 4.2% this month. 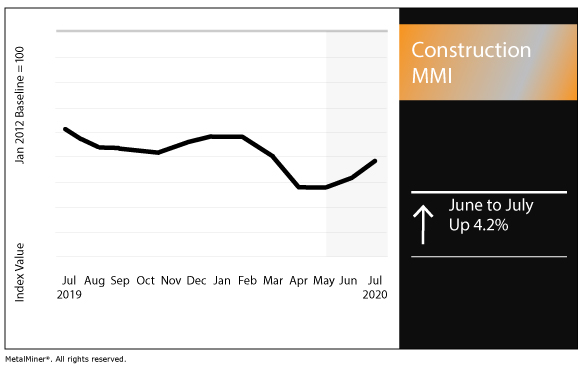 According to the most recent reporting from the U.S. Census Bureau, U.S. construction spending reached a seasonally adjusted annual rate of $1,356.4 billion in May, down 2.1% from the previous month but up 0.3% from the May 2019 estimate of $1,352.9 billion.

Meanwhile, through the first five months of this year, construction spending totaled $543.2 billion, up 5.7% year over year.

Private construction spending checked in at a seasonally adjusted annual rate of $1,001.2 billion, or down 3.3% from the previous month.

The Architecture Billings Index (ABI), released monthly by the American Institute of Architects (AIA), posted a 32.0 in May, up from 29.5 the previous month (anything below a reading of 50 indicates billings decline).

“Business conditions at architecture firms remained extremely poor for the third consecutive month in May,” the latest ABI report states. “While the ABI score of 32.0 for the month was somewhat higher than the April score, it still indicates that the majority of firms saw their billings decrease yet again (any score below 50 indicates declining billings). Indicators of future work remained grim as well, and while a larger share of firms reported an increase in inquiries into new projects in May than in April, most firms still saw a decline.”

This month’s ABI survey asked architecture firms about “pandemic-related long-term changes at their firm due to the mandatory shift to a virtual workforce, and about client discussions regarding changing facility needs in the post-pandemic built environment.”

Housing starts down 23.2% year over year

On the housing front, housing starts in May reached a seasonally adjusted annual rate of 974,000, down 23.2% year over year but up 4.3% from the April estimate, according to recent reporting by the Census Bureau and the Department of Housing and Urban Development.

Furthermore, single-family housing starts in May reached a rate of 675,000, up 0.1% from the previous month, while the rate for units in buildings with five units or more hit 291,000.