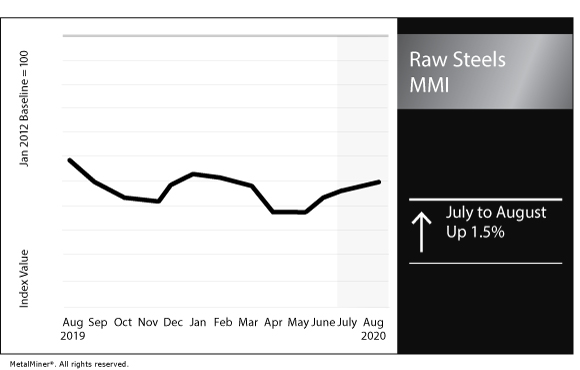 Learn when you should use a steel scrap cap collar contract versus a finished price index.

Chinese demand on the rise

In the past few months, Chinese HRC and CRC prices have increased over 20%. Meanwhile, their U.S. counterparts have followed the opposite trend. This is due to weaker U.S. demand and stronger-than-expected Chinese demand.

China produced 93.36 million tons of crude steel in July, up 1.9% higher from June. The July total marked a 9.1% increase from July 2019, according to the National Bureau of Statistics of China.

Most of China’s steel production comes from integrated mills. As a result, iron ore prices continue to increase as China’s demand remains strong.

China continued to increase its iron ore imports. In the first half of 2020, China imported 546.91 million tons of iron ore, or a 9.6% year-over-year increase.

Typically, the U.S. market lags the Chinese market by a month or two. Market watchers should monitor if the U.S. steel market to see if it follows a similar price trend to China in the following months.

Another factor contributing to the slow recovery of U.S. steel prices may come down to  the rapid recovery of mills’ capability utilization rate.

According to the American Iron and Steel Institute (AISI), the U.S. steel sector’s capacity utilization rate rose to 60.4% for the week ending Aug. 8.

While the rate is lower than the same period in 2019, when it reached 79.1%, the rate has increased steadily over the past few weeks despite low steel demand.

Similarly, steel production increased to 1.35 million tons — up from the previous week but still 26.5% below the same period in 2019.

Nonetheless, the rise of capability utilization rate at mills could mean quite the opposite for scrap.

As U.S. steel production and the capability utilization rate continues to increase, so could demand for scrap. Consequently, scrap prices might increase.

Steel in the rest of the world

The European Steel Association (EUROFER) reported steel consumption in the European Union slid by 12% year over year in the first quarter of 2020.

Furthermore, EUROFER anticipated consumption might dip lower in the second quarter due to lockdown measures.

The association expects the construction industry to perform better than other sectors. However, that still means construction output is forecast to decline by 5.3% in 2020. However, EUROFER forecast a 4% increase in 2021.

Meanwhile, Junichi Akagi, general manager of JFE Steel in Japan, said steel demand should pick up throughout the third and fourth quarters. However, Akagi does not expect demand to recover to pre-pandemic levels until March 2021.

The Japan Iron and Steel Federation reported orders of steel from automakers, which represent approximately 20% of steel demand, declined by 58% during the second quarter of 2020.

This makes it clear that these large steel-producing countries do not expect to recover their steel demand until early 2021.