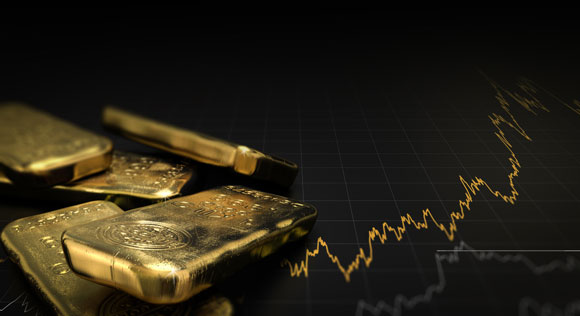 The Global Precious Monthly Metals Index (MMI) dipped 0.7% for this month’s index value, as gold prices have continued to slide. 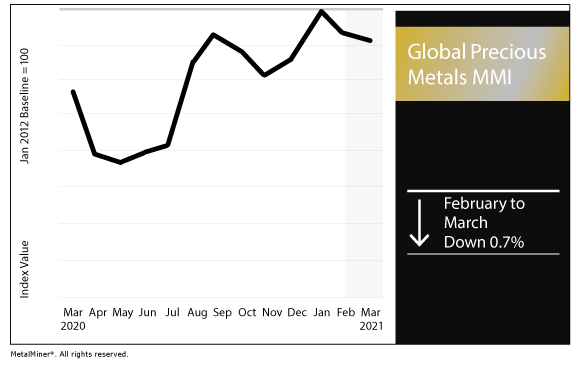 Amid economic uncertainty and turbulence, many turn to traditional safe-haven assets like gold.

However, the gold price has been on the decline since August.

The gold price reached an August peak of $2,035 per ounce. The price fell below $1,800 around Thanksgiving before recovering to around $1,950 at the start of the year.

Since then, gold has come back down, falling to $1,698 per ounce on Monday.

The US dollar and the gold price are generally inversely correlated.

As such, the US dollar has shown some strength of late.

Meanwhile, as we’ve noted previously, other factors potentially weighing on gold include adoption of cryptocurrency by some investors. While Bitcoin’s volatility is significant, the price has surged this year. Bitcoin reached $53,806 to start the week, down from the all-time peak of $57,489 reached late last month. However, Bitcoin is still up 83% on the year.

Prices for precious metals used in automotive applications continue to rise — to the chagrin of automotive manufacturers.

Rhodium, for example, used in catalysts that deal with emissions, continues to surge. After reaching $16,000 per ounce in late January, the price reached $25,800 per ounce Monday, or up approximately 61%.

Meanwhile, palladium’s gains have not been as significant, but the price remains elevated. At $2,234 per ounce on Monday, the palladium price is up 47% since its 2020 trough in late March 2020.

In its 4E PGM category in South Africa — rhodium, platinum, palladium and gold — production reached 918,679 ounces, down from 980,343 ounces the previous year.

“2020 was a defining year for the Group, marking the end of the deleveraging phase that has prevailed over the past three years,” Sibanye-Stillwater CEO Neal Froneman said. “Despite the significant challenges associated with the COVID-19 pandemic, the Group delivered a record financial performance and made notable progress towards delivery on many strategic targets.”

Gold production fell due to “Yanacocha and Cerro Negro being placed into care and maintenance in response to the Covid pandemic, lower ore grade mined at Ahafo and the sale of Red Lake and Kalgoorlie, partially offset by a full year of operations from assets acquired in April 2019,” the miner said.