Aluminum MMI: Is a consolidation period ahead for aluminum prices?

The Aluminum Monthly Metals Index (MMI) increased by 0.9% this month, as aluminum prices reached a nine-year high during the first half of the month but later declined. 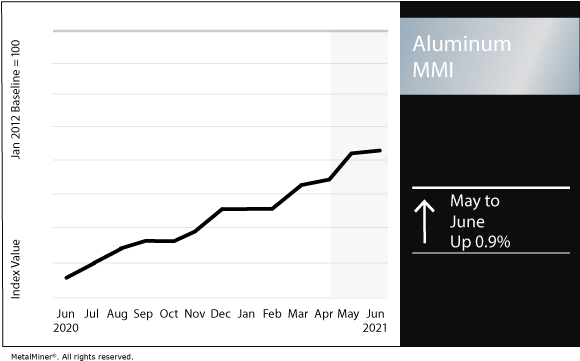 The LME aluminum price reached a nine-year high May 10 when it reached $2,565/mt.

Chinese prices behaved similarly to the LME. They reached a peak of CNY 20,030/mt on May 10 but have declined since then.

On May 25, the Economic Policy Institute (EPI) published a white paper that argues the domestic aluminum producing and consuming industries have thrived as a result of the Section 232 tariff that former President Donald Trump implemented in March 2018.

As MetalMiner reported last week, the EPI report argues the 10% duty has led to job growth in the sector and increased production.

The paper concluded that U.S. production of primary aluminum, including both alumina refining and secondary smelting and alloying of aluminum, increased by 37.6% to 1.14 million metric tons annually from March 2018 to February 2020. This increase came from the restart or production increase of five of the six smelters in the U.S.

“Projects, investments, jobs, and capacity are on the rise since the initiation of the Section 232 aluminum tariffs,” the EPI argued. “At least 57 new and expansion projects are in downstream aluminum industries producing extruded (rod and bar, pipe and tube, and extruded shapes) and rolled (sheet and plate) products. These new and expanded facilities will employ more than 4,500 additional workers, generate $6 billion in new investments, and add more than 1.1 million metric tons of annual rolling and extrusion capacity to the downstream domestic aluminum industry.”

According to the Congressional Research Service, U.S. imports of primary aluminum shrank to 3.2 million metric tons in 2020. That marked a drop of 42% from 2018. More than two-thirds of these imports in 2020 came from Canada, followed by the United Arab Emirates, Argentina and Russia.

The paper concluded that the Section 232 tariff should remain in place.

President Joe Biden offered to cut the original $2.25 trillion American Jobs Plan to $1.7 trillion in an effort to build enough support to pass the bill.

Most of the funding cuts come from roads, bridges and other transportation infrastructure projects. Biden’s initial proposal included $159 billion in new investment for those items before dropping to $120 billion. This cutback could have direct consequences for domestic aluminum demand. Highways, transit systems, buildings, infrastructure and other public sites require aluminum.

The Aluminum Association supports the potential demand boost from the Biden administration. It also advocates for an infrastructure policy framework to promote long-term federal funding for infrastructure improvements, shortening of permitting and approval processes for infrastructure projects, and incentivizing the use of advanced technology and energy management practices to boost energy efficiency in buildings.

The Mount Holly smelter is one of six aluminum smelters left in the U.S. It is the most modern smelter in the U.S., according to the company. The smelter has a production capacity of 229,000 metric tons of aluminum per year.

The smelter produces billet, Horizontal Direct Chill (HDC) ingot, T-Ingot, and slab. These products are used in the automotive and aerospace industries.

Graphene Manufacturing Group (GMG) and the University of Queensland in Australia announced the results of their in coin cells for the patent-pending surface perforation of graphene in aluminium-ion batteries.

Additionally, the stability of the materials in the battery allows it to have no upper ampere limit (which can cause overheating in lithium batteries). It also makes it easier to recycle.

Nicol added the company aims have “a viable graphene and coin cell battery production facility project after customer validation that we would likely build here in Australia.”

This technology may also be applied for electric vehicles and grid storage.

Rounding out this month’s aluminum prices, LME three-month aluminum dropped by 0.2% month over month to $2,434 per metric ton as of June 1.