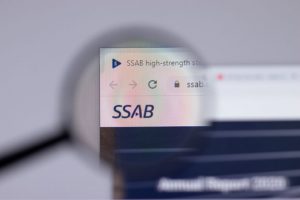 Swedish automaker Volvo has also expressed interest in acquiring the fossil-free steel, and was among the first to receive part of the test batch, the official added.

The cost of producing fossil-free steel is now 20-30% higher per metric ton than via conventional methods, the SSAB official admitted.

“But there has been a significant cost rise in the rise of CO2 emissions,” the official added, referring to the European Union’s carbon policies.

Industry watchers were also positive about the concept of fossil-free steel, yet gave some caveats over the technology and feedstock.

Iron ore suitable for the direct reduction process is normally more expensive, as it is more difficult to find, one industry watcher said in August.

A second analyst warned of potential difficulties in the process that could lead to porosity, scaling as well as compromised strength in the steel via the HYBRIT process.

He noted, however, that SSAB and its partners are still developing the process.

SSAB to invest in new plant

SSAB now plans to invest SEK 10 billion ($1.16 billion) in a three-way joint venture with compatriot iron ore miner LKAB and Swedish energy producer Vattenfall to build a plant at Gällivare, in the country’s north, for commercial production of direct reduced iron via its HYBRIT technology.

That plant will have an annual DRI capacity of 1.3 million metric tons and will tentatively go on stream by 2026. That is the same time that SSAB plans to start up a new electric arc furnace (EAF) at Oxelösund to replace the two blast furnaces now operating there.

Projected crude steel capacity from the Oxelösund EAF will be slightly over 1 million metric tons per year, the official told MetalMiner.

Plans call for the group’s Luleå and Raahe plants, respectively in northern Sweden and central Finland, to also convert their hot ends to EAFs no later than by 2045.

Luleå has one blast furnace. Meanwhile, Raahe has two.

Power to operate furnaces and the HYBRIT plans will also come from renewable sources. Sweden has nuclear power in the south as well as water and wind in the country’s north, the official stated.

“We want to make the whole value chain fossil-free,” the source added.

In addition to the joint venture, LKAB plans to build a duplicate HYBRIT plant next to the original one, which will have the same capacity and tentatively start up by 2029, the official added.

LKAB mines iron ore at Kiruna and at Malmberget in northern Sweden.