The Renewables Monthly Metals Index (MMI) rose by 3.9% this month. 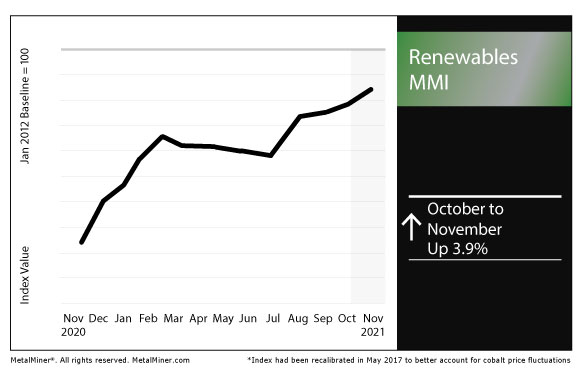 The cell features a nickel-manganese-cobalt cathode.

“What we have shown here is a clear pathway to closing the loop on batteries and that there exists a sustainable, environmentally-preferable alternative to conventional mining in order to source raw materials for battery production,” Northvolt Chief Environmental Officer Emma Nehrenheim said. “The recycling process can recover up to 95% of the metals in a battery to a level of purity on par with fresh virgin material. What we need now is to scale-up recycling capacities in anticipation of future volumes of batteries requiring recycling.”

The firm said it plans to scale up recycling capabilities to produce cells with 50% recycled material by 2030.

“To secure this, Revolt Ett, the company’s first giga-scale recycling plant under development adjacent to Northvolt Ett gigafactory in Skellefteå, Sweden, will be expanded beyond its initial design to enable recycling of 125,000 tons of batteries per year,” the firm added.

Construction on the expansion project will begin in Q1 2022.

Elsewhere, the House of Representatives passed the Infrastructure Investment and Jobs Act on Nov. 5, sending it to the president’s desk. (President Joe Biden is scheduled to sign the bill today, Nov. 15.)

“U.S. market share of plug-in EV sales is only one-third the size of the Chinese EV market,” the White House said in a summary of the bill. “That needs to change. The legislation will invest $7.5 billion to build out a national network of EV chargers in the United States. This is a critical step in the President’s strategy to fight the climate crisis and it will create good U.S. manufacturing jobs.”

The investment will help progress toward the president’s goal of a nationwide network of 500,000 EV chargers.

The 2021 share came in about flat compared with the previous year. However, the EIA forecasts that share to rise to 22% in 2022.

The U.S. will add to its wind and solar power generation next year, the EIA added.

The GOES MMI, the index tracking grain-oriented electrical steel, rose by 4.6% this month. 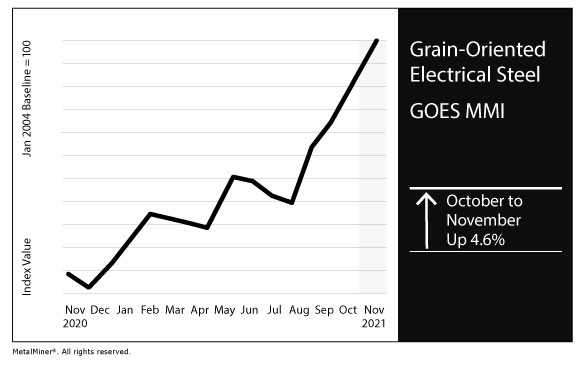 Cleveland-Cliffs is the only U.S. producer of grain-oriented electrical steel.

Citing rising imports from Canada and Mexico, the representatives called on the Biden administration to negotiate with the two countries to reduce imports and laminations and cores made of GOES.

PREVIOUS POST:
Stainless MMI: Stainless prices beneath peak but remain bullish
NEXT POST:
Is the LME running out of metal?