Home | Inventory Stock Levels | Could we be seeing a re-run of the 2007 nickel market?
Market Analysis

Could we be seeing a re-run of the 2007 nickel market?

Or so asks an interesting post in Reuters last week regarding the nickel market. Back in 2007, nickel stocks had plummeted while prices rocketed.  Today, we also have plummeting stocks and a rocketing price. Inventory does not appear as low today as in 2007, yet, nor has the price exceeded $24,000 per metric ton. In 2007, prices peaked at nearly $50,000/mt in the spring of 2007 before crashing equally precipitously over the ensuing 18 months. 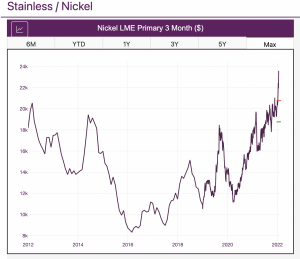 Back then the market saw a shortage of refined nickel from suppliers like Indonesia along with rapidly rising demand from an emerging China. Today, China has a strong stainless steel sector driving physical demand but supporting that today – batteries for electric vehicles. The culmination of the two has “the most significant degree of tightening surprise in balance across the base metals in 2021”, according to Goldman Sachs.  Reuters quoted the bank’s estimate that the global nickel market registered a deficit of 159,000 metric tons in 2021, amended from an earlier prediction of a surplus of 49,000 tons. Goldman expects another smaller deficit of 30,000 tons this year. So too does J.P.Morgan, which projects a 40,000 ton deficit in 2022.

While the stainless-steel sector will likely cool over the course of this year, demand from the fast-growing battery sector will accelerate as the electric vehicle revolution picks up speed. Ford announced this month it would double its production of the electric F-150 Lightning pickup due to strong demand. Meanwhile, the FT reported that one in four new car sales in the UK in December involved a battery vehicle, while total new energy vehicle sales jumped 169% in China last year. J.P.Morgan analysts project nickel usage in batteries to grow by 50% year-on-year in 2022, equivalent to an extra 127,000 metric tons, taking over from stainless as the biggest driver of demand growth. However, stainless remains the largest nickel consumer by sector by far.

Not surprisingly, speculators as well as consumers have bought metal. Reuters reports one dominant position holder has in excess of 90% of LME stocks for certain cash date positions this month. This put the London market under extreme duress blowing the costs to borrow metal overnight to $90/ton at one point, before the critical third Monday of the month prompt date passed and pressure on short sellers eased. The cash price remains in a significant backwardation, a premium to longer dated 3 month prices, typical of a tight physical market.

Could nickel prices run higher seems a less relevant question than how much higher could nickel run. Will we for example, test the 2007 peak? That’s a long way off. New mine and refining capacity will come on-stream particularly at scale in Indonesia. However,  the timescale remains uncertain. The technologies remain new, and therefore the supply side remains at risk of undershooting. At the same time, stainless demand will likely cool towards the end of the year, particularly in top consumer China. But it comes as no surprise that automakers have scrambled to secure long term supply agreements. Afterall, the supply market remains uncertain and limited.

PREVIOUS POST:
What we are watching: aluminum stainless and Tesla rumors
NEXT POST:
European steel prices at a crossroads