This is the final part of his white paper on Brazil’s aluminum foundry industries.

Although there are numerous strategies, with the changing dynamics of the markets these strategies need to be reevaluated in order to minimize the risk involved, especially in the procurement context. When the mitigation strategies looked from a conservative front can be divided into two broader verticals, namely:

Electricity Consumers in Brazil can negotiate with suppliers on their electricity contract price based on their knowledge of certain parameters of the industry. A clear understanding of their consumption pattern and knowledge about the supplier’s generation mix can give consumers an upper hand over suppliers during the final negotiation of contract prices. 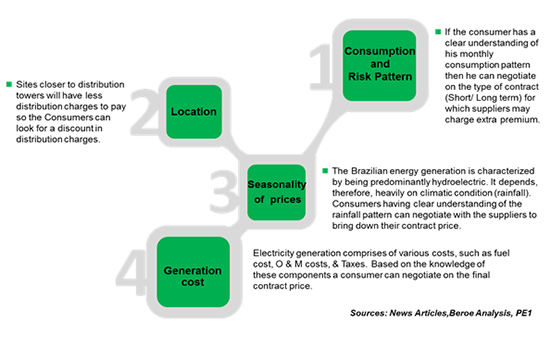 END_OF_DOCUMENT_TOKEN_TO_BE_REPLACED

On Monday, Anjumohan detailed how energy prices are impacting Brazil’s aluminum production industry. This section goes into further detail about the status of Brazil’s foundry industry.

Brazil is the 7th-largest producer of metal castings considering total global production in 2012. For 2013, it is estimated that the Brazil’s metal production to be 2.96 million metric tonnes. As an exporter, in 2012 Brazil catered about 8.5% of US metal castings demand. Since 2011, Brazil has dropped significantly as an exporter of castings to the US. This is primarily due to the gain the in the Brazilian real against the dollar and the impact of higher energy cost in metal castings production. 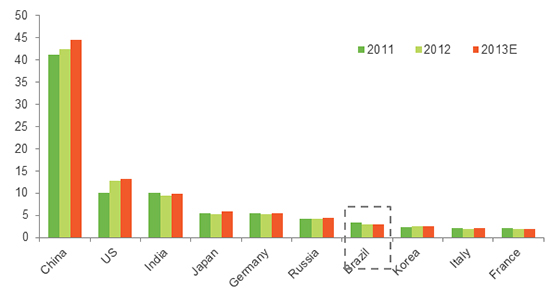 The automotive industry is the major end use industry which drives metal castings production in Brazil. In 2014, the Brazilian automotive sector is expected to have challenges with stagnant or moderate growth. Despite increasing focus on productivity and cost optimization, profitability and competitiveness remains low.

Most of the aluminum produced in Brazil is consumed for domestic demand, especially for the automotive industry. Considering aluminum castings which are produced in Brazil, 95% are consumed locally. However, 5% are exported. With the rise in electricity prices and a supply deficit for aluminum as a raw material for castings, supply security could be an issue for the end use industries in years to come. END_OF_DOCUMENT_TOKEN_TO_BE_REPLACED

Last week, Anjumohan detailed how energy prices are impacting Brazil’s growing automotive production sector. This section goes into further detail about the effect of energy prices on aluminum smelting there.

From a short term prospective (2-3 yrs.), it is anticipated that the Brazilian electricity sector won’t be able to implement diversification and the volatility in electricity prices will continue to prevail. Although from a long term prospective (5-10 yrs.) the prices will become more competitive with advent of fuel diversification in the coming years there-by giving industries an upper hand during energy/electricity procurement.

Brazil is struggling against time to avoid power blackouts and electricity rationing as a drought prevents the water-rich nation from recharging its hydroelectric-powered dams. Brazil was once the world’s sixth-largest producer, a major player with an integrated chain from bauxite mining to primary aluminum production.

However, now, Brazil is the eighth major aluminum producer, preceded by China, Russia, Canada, the USA, Australia, United Arab Emirates and India. World primary aluminum production increased by about 3% in 2013 compared with production in 2012. New capacity in China accounted for most of the increased production. The major primary aluminum producers in Brazil are Albras – a joint-venture between Norwegian Norsk Hydro and Japanese consortium Nippon Amazon Aluminum, Alumar – a partnership between multinational resource group BHP Billiton, Pittsburgh-based aluminum giant Alcoa, and Rio Tinto‘s Alcan subsidiary, Novelis do Brasil Ltda., Votorantim Metais, and Alcoa Alumínio. In recent times, the production of Brazilian aluminum companies is at the lowest level in 12 years amid high power costs and metal price declines. Though the electricity prices for the producers were reduced by 7.8%  for the previous year, still the power cost remains as the industry’s main hindrance.

Over the last 20 years Brazil attracted many global aluminum producers due to good-quality, accessible bauxite reserves with expectations of ample cheap energy supplies because of hydroelectric dam projects. Today, the nation finds itself in the middle of the worst dry spells in its modern history. In recent times many metals and mining majors have stopped expanding their aluminum capacities in Brazil and some companies are expected to trim their exposure plans to the region. Aluminum smelters are electricity consumers wherein power consumption accounts for about half of the cost of refined metal production.

END_OF_DOCUMENT_TOKEN_TO_BE_REPLACED

Brazil is South America’s largest consumer market. Among the other emerging economies it is still considered as a bustling market with a lot of potential customers.

The Brazilian automotive industry is one of the fastest-growing automotive manufacturing markets in the world which accounts for almost 20% of the country’s GDP. Based on strong growth in the last few years, Brazil has now become the fourth-largest automotive market globally next to China, the USA and Japan. The dual effect of strong domestic demand with tax incentives has seen the regions automotive sector witness strong growth compared with unsteady global demand. In total, there are about 57 plants, which in 2013 produced 4.3 million vehicle units by production and are estimated to reach 5.7 million units by production in 2016 with a CAGR of 8-10% over the period 2013-16.

The Brazilian government is actively deterring vehicle imports and working to encourage the construction of assembly plants there. This made most of the domestic and international automakers are set up new factories in Brazil at a steady clip. Chery Automobile is setting up its new factory there and it is a vivid example of Chinese industries expanding in the Brazilian market.

END_OF_DOCUMENT_TOKEN_TO_BE_REPLACED

When Sourcing Metal Castings from China vs. Mexico, Total Cost of Ownership Matters

To conclude our series on why sourcing metal castings from Mexico over China may make more sense (here’s the most recent part in the series), the difference in comparing the shipping costs between Mexico and China has become worse in recent years due to the rise in oil prices.

Due to factors such as distance, customs, and importation, the time difference in transit from Mexico to the US and China to the US can be about 3 weeks. The North American Free Trade Agreement (NAFTA) allows castings produced in Mexico to flow north across the US border quickly and efficiently.

Changes to China’s VAT system from August 2013 have increased the overall burden on international air and sea transportation providers, their agents based in China, freight forwarders and other logistics service providers.

END_OF_DOCUMENT_TOKEN_TO_BE_REPLACED

China first began to make its presence strongly felt on the world manufacturing stage roughly a decade ago, and the global view has been that China’s inexpensive labor and production capability are not too far superior to Mexico’s manufacturing export sector.

China’s wages have soared in recent years and are expected to keep rising 18% a year. China was at about one-quarter of Mexico’s labor rate in early 2000 and is expected to be slightly higher by 2014. Labor productivity, in regards to the metal casting industry, remains higher in Mexico even though the gap is narrowing; i.e. 1,350 metric tons per plant as China possess 1,230 metric tons per plant as its productivity.

Considering the electricity cost, natural gas prices in Mexico are tied to those of the US, which are low because of market surplus. China pays from 50% to 170% more for industrial natural gas. US natural gas exports to Mexico hit a record last year, helping the country’s energy costs low as its industry grew rapidly.

END_OF_DOCUMENT_TOKEN_TO_BE_REPLACED

About 30% of US metal castings consumption was imported from China from 2011 to 2012. (We went into how the automotive industry should bolster castings demand for years to come in Part One here.)

Before that, China attracted most of the US-based metal castings end use industry with the attractive subsidies, tax regulations, cheap labor and currency advantage against US dollar. Beyond the declining exchange rate, inflation in China has raised the cost of Chinese parts. However, China’s inflation has exceeded US inflation consistently since 2007.

With the Chinese labor wages rising at about 17% per year and the value of China’s yuan (CNY) continuing to increase, the gap between US and Chinese labor wages is narrowing rapidly. The net labor costs for manufacturing in China are expected to converge with those in the US by around 2016. Beyond the above-mentioned factors, there exist hidden costs when sourcing from China.

Every manufacturer (who reads MetalMiner, anyway) should know these by now – here’s a bullet list:

END_OF_DOCUMENT_TOKEN_TO_BE_REPLACED

The global metal casting industry is expected to reach 105 million metric tons by production over the period 2014-15. The industry has been completely driven by the recovery of end use industries such as automotive, which contributes 40% of global castings consumption.

With the initial post of our series on how Mexico is outpacing China for US castings demand, we first dig into how auto sales in the United States continue to gain ground.

The US automotive industry is expected to have a CAGR of 2.3% over the period between 2013-17. Considering US light vehicle sales, the industry rode highest in the year 2000 when they exceeded 17 million. They hovered at about 16 million through 2007 and then crashed to below 10 million in 2009. Since then, sales have recovered steadily.

END_OF_DOCUMENT_TOKEN_TO_BE_REPLACED

Metal Casting Cost Savings to Be Had Despite Scrap Import Duties

MetalMiner welcomes guest contributor Suriya Anjumohan, a Senior Research Analyst with Beroe Inc., specializing in metal castings, forgings & stampings. Suriya has worked has worked with many automotive, steel and medical devices clients at Beroe in forming sourcing strategies and providing recommendations. More on the company below.

In India, the unorganized sector, with more small and medium-scale foundries, dominates the metal casting industry.

Since 2012, there has been a severe demand slowdown with the end use market due to economic downtrend, which has caused downstream sectors to be more rigid with regards to quality requirements. Issues with the domestic metal scrap market include:

In India, before 2013, the import duty for metal scrap was zero. Speculation has been going around that the levied import duty on metal scrap is to be removed by India’s government, or it will rise to further facilitate the domestic sponge iron manufacturers.

END_OF_DOCUMENT_TOKEN_TO_BE_REPLACED

The Indian casting industry contributes about 10% of global castings production and is highly consolidated with small and medium-scale foundries. Metal casters predominantly depend on scrap for higher yield and reduced energy consumption.

India lacks the availability of sufficient domestic metal scrap to meet the demands and quality requirements; hence it depends on metal scrap imports from developed nations. To support the domestic sponge iron manufacturers, the government of India levied a 2.5% import duty on metal scrap, which is expected to deter the import of scrap and adversely impact the domestic casting industry.

Along with Indian rupee depreciation, it depicts the import of metal scrap as a spendthrift for castings production among the metal casters. 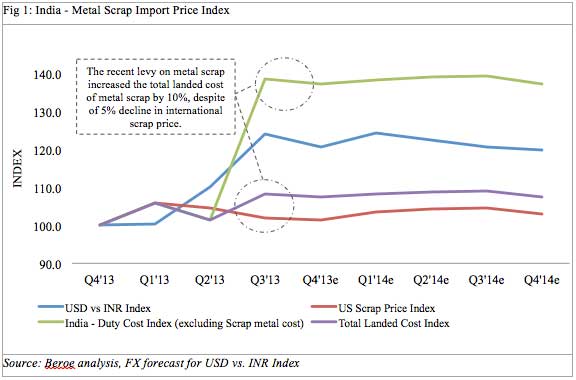