END_OF_DOCUMENT_TOKEN_TO_BE_REPLACED

Raw Steels MMI Falls: How Will Steel Prices Look in the Next Two Months?

Our Raw Steels MMI fell seven points* due to the slump in China’s steel prices in April.

(*Note: We changed one of the data elements of our index to map the underlying market more effectively. That change contributed to a lower number this month.)

Since their peak in February, China’s steel prices have fallen by more than 20%, while U.S. prices have continued to climb. But guess what, things changed towards the end of April. Prices in China started to recover (see how we predicted that) while U.S. prices fell (yes, we predicted that too). In this post, I’ll analyze what this price divergence means and how you — assuming you buy or invest in steel — can take advantage of it.

END_OF_DOCUMENT_TOKEN_TO_BE_REPLACED

This month, some of our metals reached new heights while others saw their rallies noticeably falter.

Aluminum and Raw Steels are still riding high, while complicated supply stories saw stainless and copper fall. Demand from manufacturers for almost all of the metals we track remains strong.

17 Of the 18 manufacturing industries tracked by the Institute for Supply Management’s index of national factory activity reported growth and no industry reported a contraction last month. Buyers still might want to beware as metal markets are showing more pull-backs than we witnessed in March, despite the overall bullish behavior across the entire industrial metals complex.

GOES MMI: Will China Set a Market Floor for Prices?

Global steel prices tend to find a floor based on the price of Chinese steel. If Chinese prices fall, domestic U.S. prices also tend to fall. However, grain-oriented electrical steel continues to beat to its own drum, often not aligned with underlying steel prices.

March is no exception.

Although U.S. domestic steel prices continued to rise in March, the GOES M3 price fell and fell rather significantly dropping by nearly 7%. 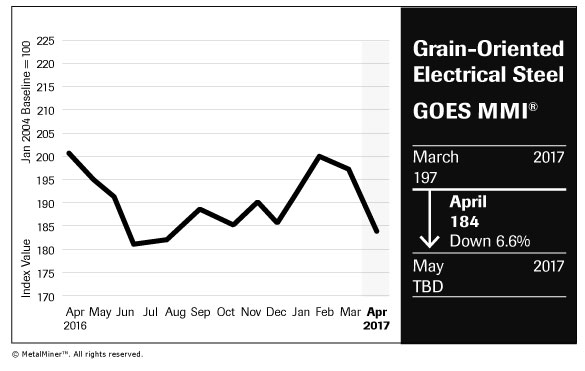 Meanwhile, according to a couple of recent TEX Reports, GOES prices from Baosteel increased by $38/metric ton in April after increases of $168/mt from January through March. Baosteel acts as the price leader and according to a recent report, and will likely stand pat until or unless others also increase their prices. Those “others” may have a near-term opportunity to do so as a large tender from Bharat Heavy Electricals for 20,000 mt will bring in the global GOES producer community. As China tends to set the “market floor” for global steel prices, the TEX Report suggests that this tender will serve as the global price floor for GOES for the balance of 2017.

Supporting the rising price theory, TEX Report also suggests that prices have risen by $200-300 per mt in the Middle East and India.

Ironically, prices for steel rebar on the Shanghai Futures Exchange have declined by 5% according to a recent MetalMiner story on the back of declining coking coal (4%) and declining coke prices (5%), as well as falling iron ore futures. Some, including MetalMiner, believe the price declines are due to speculators unwinding bullish bets. 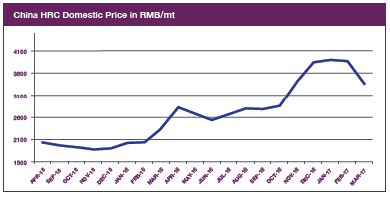 Regardless, Chinese prices for hot-rolled coil are falling and though GOES prices often diverge from underlying steel market trends, upward price movements may be elusive.

Copper prices continued to trade flat in March. Over this month, strikes at major mines Escondida and Cerro Verde ended while Freeport-McMoran got a temporary export permit for its Grasberg mine.

The strike at the world’s largest copper mine, Escondida in Chile, ended at the end of March. It took 44 days for the company to reach an agreement with workers, much longer than expected.

It will take time for the mine to ramp up output back to pre-strike levels. According to Platts, on April 26, Owner BHP Billiton will outline the impact of the strike on Escondida’s output. It is estimated that the mine have lost around 200,000 metric tons in production because of the strike.

According to CNBC, workers at the mine voted to return to work, despite not having reached an agreement on a new pay deal with management. Instead, workers extended their existing contract by 18 months and they will be able to renegotiate a new deal in 2018 after a new pro-union law in Chile goes into into effect.

According to a recent Commodity Insights article, Cerro Verde, the largest copper in Peru, has only been operating at 50% of capacity due to a strike that began on March 10. At the end of March, workers signed an agreement providing for more generous health care benefits as well as a profit share earlier than in previous years. The mine produced just under half a million mt of the red metal last year.

Grasberg Mine Gets Temporary Export Permit

Reuters reported that Freeport-McMoran was granted a temporary permit to export copper concentrates from its Grasberg mine in Indonesia, the world’s second largest copper mine. The new permit broke a 12-week deadlock that had cut supply to Asian smelters. The new export license will last eight months. The amnesty means the company can renew deliveries of copper concentrates in Asia after declaring force majeure in February, but longer-term discussions over the company’s rights in Indonesia have yet to be determined.

Copper supply disruptions have lasted longer than expected. Although they seem to have come to an end, their impact on supply still need to be outlined. In addition, these strikes have set the case for wage negotiations across the industry.

Some major contract negotiations in large mines are due in the coming months. In the meantime, copper investors might focus their analysis on macro factors such as the ongoing China-U.S. trade negotiations, the performance of the U.S. dollar and global demand for industrial metals.

China is now home to two-thirds of the world’s solar-production capacity.

The efficiency with which China’s solar products convert sunlight into electricity is increasingly close to that of panels made by American, German and South Korean companies. Because China also buys half of the world’s new solar panels, the country now effectively controls the panel market.

A recent New York Times article details the meteoric rise of China’s solar industry and how its dominance in growing markets complicates the Trump administration’s attempts to cut down the U.S. trade deficit with China. China’s policy shifts and business decisions now have global impact on solar prices and production, particularly of crystalline polysilicon photovoltaic panels, everywhere else in the world.

Now that China is cutting subsidies that it offers to panel manufacturers there, the ripples are being felt by installers in the U.S. and elsewhere. China’s solar-panel makers have recently cut their prices by more than a quarter, sending global prices plummeting. The NYT reports that Western companies have found themselves unable to compete. They have cut jobs from Germany to Michigan to Texas and the account includes the case of Russell Abney, a 49-year-old equipment engineer from Perrysburg, Ohio. The American panel manufacturer he worked for laid off Abney, among others, to remain competitive after China yanked its subsidies and manufacturers there lowered domestic prices to compensate.

If China’s dominance of solar panel manufacturing remains, able to move markets and cause layoffs worldwide depending on which subsidies are continued and which are scrapped, then the solar panel silicon market is likely to remain in the low-price rut we’ve documented in the Renewables MMI since 2012.

The Renewables MMI fell one point to 54 this month.

Murkowski said at a committee hearing recently that this trend exposes the U.S. to potential supply shortages and price volatility, while also reducing international leverage and attractiveness for manufacturing.

Our monthly Global Precious Metals MMI dipped down a point in April from last month, losing 1.2% to end up at 83.

Ultimately, most gold, silver, platinum and palladium price points from the U.S., China, Japan and India dropped off for the month, which led to the sub-index’s overall decline — but there was one price point that decided to blaze its own trail upward.

The U.S. palladium bar price rose 3.4% over the past month, the third straight month of increases on the MetalMiner IndX. END_OF_DOCUMENT_TOKEN_TO_BE_REPLACED

Stainless MMI, With its Supply Situation, Takes a Dip; Will Prices Rebound?

Our Stainless MMI lost 3 points in March, essentially losing what it gained in February.

Industrial metals continued their rally during the first quarter but nickel didn’t fare as well. Prices are still significantly higher than they were one year ago, but investors are now finding little reason to be any more bullish than bearish due to a complex supply narrative.

On March 13, The Philippines’ president Rodrigo Duterte, threatened to stop all mining in the country. Despite the potential for more closures, investors doubted that Duterte would enforce such strict regulations. Duterte still supports Department of the Environment and Natural Resources Secretary Regina Lopez; the Philippines’ mining industry hoped for the Commission on Appointments (CA) to reject Lopez as the Environment secretary in March.

However, lawmakers decided to postpone confirming or rejecting Lopez as the head of the department. Further confirmation hearings are expected to take place in May. END_OF_DOCUMENT_TOKEN_TO_BE_REPLACED

Our Aluminum MMI rose again in March. London Metal Exchange prices rose above $1,950 per metric ton and, given the bullish sentiment among investors, aluminum might soon reach the $2,000/mt milestone.

Prices were buoyed by confidence that China will implement their agreed-upon cuts. The world’s largest nation-producer of the metal will force about a third of aluminum capacity in the provinces of Shandong, Henan, Hebei and Shanxi to be shut down over the winter season, which runs from the middle of November through the middle of March, putting at risk about 1.3 million mt of production.

It would be normal to see these producers to simply ramp up production ahead of the winter season to make up for lower output during the winter months. However, that won’t be the case. END_OF_DOCUMENT_TOKEN_TO_BE_REPLACED