Global aluminum demand is more robust than most expected. Chinese stimulus measures boosted demand for aluminum in the auto and real estate industries. In addition, the U.S. is expected to demand more aluminum amid Donald Trump’s plans to inject one trillion dollars in U.S. infrastructure.
Two-Month Trial: Metal Buying Outlook
Strong demand is supportive for aluminum prices this year. However, in this piece we are going to focus on the supply side. We believe three factors are going to disrupt global aluminum supply. As a result, we’ll see higher aluminum prices this year:
[caption id="attachment_82825" align="alignnone" width="338"] 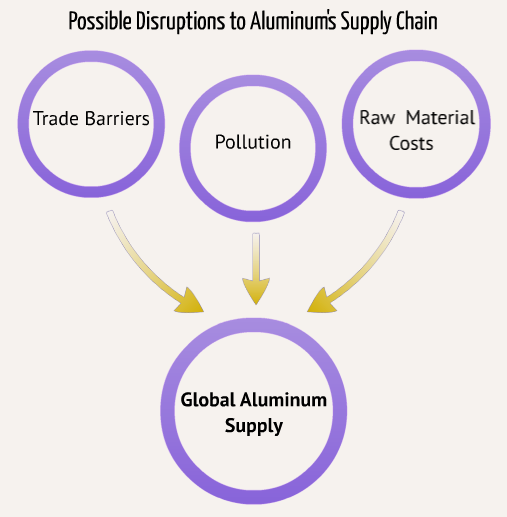 Last week, U.S. customs officials seized $25 million worth of aluminum linked to a Chinese billionaire accused of stockpiling the metal across the world, according to the Wall Street Journal. The move is “the most potent action yet by federal authorities probing whether U.S. companies connected to Chinese magnate Liu Zhongtian illegally avoided” the nearly 400% tariffs “by routing the metal through other countries,” according to the paper. Currently, Homeland Security is conducting laboratory tests on the aluminum to determine whether the metal is restricted under U.S. law.

Remember that giant aluminum stockpile that sat in a Mexican desert for years before being transported to Vietnam recently?

Why it has crisscrossed the globe remains a puzzle for American executives and investigators trying to unravel the logic behind its movements.. Now, a Dallas attorney’s correspondence suggests a surprising possibility: that the stash is Chinese billionaire Liu Zhongtian’s retirement fund.

Like all Chinese citizens, Zhongtian, the 52-year-old chairman of aluminum giant China Zhongwang Holdings Ltd., isn’t supposed to move more than $50,000 a year out of the Communist Party-led country. To get around the restrictions, Chinese nationals have used Hong Kong money changers to illicitly transfer cash between bank accounts, combined their $50,000 quotas to make large-scale transfers and even carried cash across borders in suitcases.

The Wall Street Journal reports that Zhongtian developed an industrial-scale approach involving boatloads of aluminum which he stockpiled with plans to sell the metal over time, according to the Dallas attorney’s correspondence and people who have worked for Mr. Liu whose accounts are supported by shipping and corporate records.

Representatives of China Zhongwang deny that the stockpile is an attempt to move wealth out of China.

A massive stockpile of 500,000 metric tons of aluminum has been trucked out of the Mexican city of San José Iturbide and shipped to a remote port in Vietnam.

The Wall Street Journal reports that the stockpile is believed to be related to the product of Chinese aluminum producer China Zhongwang.

Zhongwang is a state-supported enterprise that has received large benefits and financing from the government of China. The company also has a long history of circumventing and evading duties in trade cases.

Among other allegations, Zhongwang was accused of exporting extrusions from China and remelting them back into billet in other countries, including Mexico, in order to later sell this metal in the U.S. market as primary aluminum.

With so many controversies over the past few years, the story of this company smells like a rat, to say the least. However, the purpose of this post is not to find whether or not the company is guilty of taking illegal importing actions but to discuss what could be the price impact of this moving stockpile.

It is estimated that in 2014, the world produced near 50 million mt of aluminum. Given this number, the named aluminum stockpile accounts for less than 1% of the annual global supply.

Although the volume is pretty big, it’s immediate impact on global aluminum prices will likely be none. This is because the metal has already been produced and it’s just moving from one place to another before its final use. The metal is already there and it’s going to be consumed whether it is in U.S. or in another country. Therefore, it’s all already factored into the price.

A different thing is when a company announces a big increase or decrease in production. Like when Glencore announced its plans to slash its zinc production by 500,000 mt. That did have an impact on prices as the market needed to factor in the future supply deficit.

Although I don’t expect this news to have an immediate impact on aluminum prices, it could have a bullish impact down the road. Zhongwang was already under U.S. investigation for allegedly dodging import duties of as high as 374%. No,w there are rumors that the company might have links to this huge stockpile.

President-elect Donald Trump vowed to bring more jobs back home during his campaign and given the ongoing controversies, Zhongwang might be one company he starts with. If that’s the case, China’s largest and the world’s second-largest aluminum extrusion company could potentially see its export margins shrink.

Therefore, that’s the potential bullish case that news like this one can develop into: Higher trade barriers can turn into supply cuts as international producers lose profitability in their export business.

A massive stockpile of 500,000 metric tons of aluminum has been trucked out of the Mexican city of San José Iturbide and shipped to a remote port in Vietnam, according to shipping records and people familiar with the matter.

The Wall Street Journal reports that the stockpile is believed to be related to or entirely the product of Chinese aluminum producer China Zhongwang. As a result of moving the massive stockpile, Vietnam has become a major importer of aluminum extrusions this year.

Based on preliminary Census Bureau data, the American Iron and Steel Institute reported that the U.S. imported a total of 2,682,000 net tons of steel in October, including 2,225,000 nt of finished steel (down 3.4% and up 4.7%, respectively, vs. September final data).