It would seem Beijing only has to speak and the market reacts — this time, it’s about base metals. Worried by what it sees as excessive inflation in commodity prices, […]

This morning in metals news, copper and other metals will bounce back modestly in 2019 (according to a Reuters poll), AK Steel surged during after hours Monday and the Office […]

The base metal trendline appears to have shifted sideways this month after skyrocketing at the end of 2017. Market observers can take comfort knowing that after a meteoric rise, it […]

November ended with a general cool-down for the base metals complex, contrary to commodities, which increased sharply. MetalMiner expected the industrial metals price pullback since the uptrend started earlier for […]

Aluminum exports from Qatar hit a roadblock, and it could be some time before the situation is resolved. According to a recent Reuters report, Egypt, Saudi Arabia, Bahrain and the […]

The International Lead and Zinc Study Group released its Spring 2017 Meetings/Forecasts, which found that global demand for refined lead metal will increase 2.3% this year to 11.39 million tons. […]

Goldman Sachs is bullish on aluminum, projecting it to rise following China’s supply-side reforms. According to a recent report from CNBC, Goldman expects aluminum prices to hit the $2,000 per metric […]

Over the holidays, we are republishing and revisiting some of our most well-read posts of 2016. While this one technically doesn’t fall into the 2016 (it was initially published December 14, 2015) but we are still looking back at it anyway since it deals with predictions about metal prices for the year we’re about to leave behind. It also gathered the second-most traffic of any post we published in 2016 despite predating the year by a few weeks.

At the time, my colleague Raul de Frutos wrote “Currently, some key Chinese indicators we are tracking are giving us no reason to expect higher metal prices in 2016.”

Yet, we have seen higher metal prices in 2016 and we are now in a full metals bull market. The reason we are is because of everything Raul cited in his post. He was 100% right that “the longer it takes China to clean up its mess, the later metal prices will hit bottom.”

China cleaned up its mess, hit bottom early in 2016 and turned global commodities demand around remarkably fast, all things considered. This reminds us that markets can make a turn around quickly. The future is unpredictable and we need to take the market day by day. Just four months after this post, we went from bearish to completely bullish on industrial metals. Enjoy the second of our Best of MetalMiner in 2016 series. -Jeff Yoders

As you well know, the main cause of the commodities meltdown has been China’s slowdown. Since China makes up half of the world’s demand for commodities, the economic slowdown means lower demand which has led to a situation where a glut of materials can’t find a home.

The role that China plays in commodity prices is so big that the future of metal prices is totally dependent on China. The longer it takes China to clean up its mess, the later metal prices will hit bottom. Currently, some key Chinese indicators we are tracking are giving us no reason to expect higher metal prices in 2016.

Imports to China dropped 8.7% to $143.14 billion in November from a year earlier, extending a slump in imports to a record 13 months, suggesting that government stimulus measures are failing to boost growth.

Meanwhile, Chinese exports declined 6.8% to $197.24 billion in November from a year earlier, marking the fifth straight falling month. The fact that China is struggling to increase its exports demonstrates that global demand is weak and that China will have to find a more painful solution to balance its surplus. The trade surplus and the inability to find a home for the excess of materials flow will continue to keep a lid on China’s growth, depressing commodity prices.

Yuan Falls To Four-Year Low Against The Dollar

Chinese authorities want to see a smooth depreciation of the yuan/renminbi as China faces external pressure not to devalue its currency too quickly. A sharp depreciation would probably hurt the country’s credibility at the same time China wants to attract more foreign capital. In addition, it would raise criticisms that China is keeping its currency artificially low to encourage more exports.

Recently, China’s central bank cut its reference rate to the lowest level since 2011. The yuan fell against the dollar to the lowest level since 2011. Although China has said that it has not allowed the yuan to slide to boost the economy or increase exports, it seems that the market is taking these developments as desperate actions from China’s government to help the economy, raising concerns among investors that the country’s slowdown might worsen.

We believe that equity markets are the best benchmark for the performance of China’s economy, or at least investors’ sentiment about China. We’ve analyzed before the link between China’s stock market and commodity prices. Currently, this link is even more noticeable.

After the huge slump this summer, equity prices mildly recovered, but since October we see that equities are heading south again. The poor performance of Chinese stocks demonstrates that investors are still worried about the future of the country and not lured by its government actions.

Contrary to what others are saying, we suspect that the slump in China’s stock market could continue, resulting in more fears and more sell-offs in commodities/metals markets.

Goldman Sachs has revised its base metal outlook for the year and Alcoa, Inc., has opened earnings season by reporting lower-than-expected Q2 profits.

Goldman Sachs on Monday raised its outlook for zinc, aluminum and nickel prices anticipating supply inequalities to continue across the metals sphere throughout the second half of the year.

“In our view, the impact of the prior stimulus is still set to result in sufficient demand growth such that we will continue to see supply differentiation across the metals space during the second half of 2016,” the bank said in a note to investors.

Alcoa, Inc. on Monday reported a lower quarterly net profit, with falling aluminum and alumina prices pressuring revenue while plant operations have been scaled back ahead of a spinoff of its traditional smelting business later this year.

Alcoa reiterated its forecast for global automotive production growth in 2016 of 1% to 4%, but said continued weakness in the North American market would offset anticipated growth in heavy-duty truck, trailer and bus production in China. 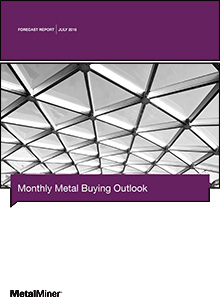 Read all about the implications of Brexit and other recent developments for metals markets in our July Monthly Metal Buying Outlook.

Our Monthly Metal Buying Outlook allows you to receive short- and long-term buying strategies with specific price thresholds. If you would like to trial our metal price forecast, click below to get two free months of reports.