It has probably never been as hard to read the runes for the fortunes of emerging market (EM) economies as it is now.

If currencies are any barometer for the health of an economy, or at least for investor’s perceptions of the health of an economy, this year has seen considerable variations and fluctuations. Robust commodity prices appear to signal continued strong health and confidence in China, even as the government works hard to realign the economy from export-led manufacturing to consumer-led domestic growth, but the currency has been falling since the spring as this chart shows. 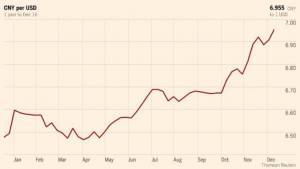 EM investors started the year hiding over fears about China and the oil market, then recovered during mid-year as growth remained stable and commodities rose.

Then, a shock Donald Trump election victory sent expectations of early and multiple Federal Reserve interest rate increases into the news. As the FT notes, we now have fears over the status of trade with China and the threat of it being labelled a currency manipulator casting a pall over U.S.-Sino relations in the year ahead.

A Pause in Emerging?

As a group, EM currencies have not fared well of late. A few commodity currencies like the Russian ruble, the Brazilian real and the South African rand have made gains, but the in addition to the Chinese renminbi, the Turkish lira, the Argentinian and Mexico pesos have fared poorly, dropping double digits. 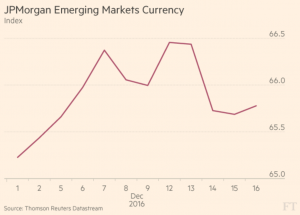 The FT reports there has been a heavy outflow of funds from emerging market bonds, raising borrowing costs and putting pressure on the countries that borrow most heavily in U.S. dollars.

According to the newspaper, investors pulled $1.2 billion from emerging market bond funds last week, marking the sixth consecutive week of outflows. China can cope with this sudden reversal of fortunes but the article reports Bank of America Merrill Lynch Global Research, saying a new “fragile three” has emerged this year, with Brazil, Turkey and South Africa more reliant on foreign investment and so most at risk should EM fall out of favor in 2017.

Brazil has improved its current account deficit, but both South Africa and Turkey are still struggling, with political upheaval not helping investor sentiment. The biggest worry, though, is Venezuela, which heads an index put together by Standard Chartered of countries most likely to succumb to a debt crisis. It is a list that also features Jordan, Argentina and, not surprisingly, Greece.

Across EM as a whole though, the FT reports economic growth is projected at 4.7%, led by India and China, while Latin America will rebound with 1.5% growth. As such, some see EM debt as a higher risk but high-yield and attractive investment, but much will depend on the pace of Federal Reserver rate rises and, therefore, the cost of borrowing for these countries. In a follow-up, piece we will be looking specifically at China’s debt and the challenges facing China’s poorly regulated bond market.

Some countries in Europe already have negative interest rates, Denmark and Switzerland’s are at -0.5% and -0.75% respectively, charging clients for the pleasure of holding their money, in an effort to stave of safe-haven status vs the euro.

Royal Bank of Scotland Research is not predicting base rates in euro-land or Japan to rise from 0.1% in 2015 or 2016, and in the UK they are predicted to only rise from 0.5 to 1.0% next year. That is a reflection of an almost deflationary environment and such weak growth that the risks to inflation are non-existent.

Chinese rates are predicted to fall from 6% last year to 5.6% this year and 5.3% in 2016. Likewise, India, which could fall to 7% this year from 7.8% last year, will likely only rise to 7.3% in 2016. Far from just being faced with the risk of a Greek exit, the European Union is facing exceedingly weak growth in France and Italy, the currency bloc’s second- and third-biggest economies.

These are situations that would be more readily addressed by a significant loosening of policy in Germany to boost demand rather than Europe-wide quantitative easing, but that’s another matter. The risk is as much political, both Spain and Portugal have elections this year with aggressive minority parties keenly watching developments in Greece, as economic.

The EU can’t afford to allow Greece to default on its debts because it will immediately fuel demands from other quarters for the same treatment. Even France is being sanctioned by the EU for repeatedly exceeding its 3% of GDP budget deficit limits. France, too, would love to be let out of the German-led fiscal straitjacket constricting some European markets.