This morning in metals news: consultancy GlobalData forecast copper production from the top 10 copper mining companies will rise by up to 3.8% this year; meanwhile, the US Senate Committee […]

In just over two weeks, President Joe Biden has signed 28 executive orders aimed at a wide variety of issues. The orders range from Medicaid to the country’s pandemic response […]

President Donald Trump (R-N.Y.) is set to sign an executive order this afternoon ordering enforcement and review of the H-1B visa program, popular in the technology industry, on a visit to the headquarters of Snap-On Inc., a tool manufacturer in Kenosha, Wis., according to senior administration officials.
Benchmark Your Current Metal Price by Grade, Shape and Alloy: See How it Stacks Up
He will also use what the White House called the “Buy American and Hire American” order to seek changes in government procurement that would boost purchases of American products in federal contracts, with one aim being to help U.S. steelmakers.
The moves show Trump once again using his power to issue executive orders to try to fulfill promises he made last year in his election campaign, in this case to reform U.S. immigration policies and encourage purchases of American products.
“Strong Buy America domestic procurement preferences for federally funded infrastructure projects are vital to the health of the domestic steel industry, and have helped create manufacturing jobs and build American infrastructure,” said Thomas J. Gibson, president and CEO of the American Iron and Steel Institute, the largest trade group for North American steel manufacturers. “The foundation of a strong Buy America program is the longstanding requirement that all iron and steel-making processes occur in the U.S. for a product to be Buy America compliant — from the actual steel production to the finishing processes. This ‘melted and poured’ standard has been successfully applied since 1983 and must continue to be the standard used in federal Buy America rules for steel procurement. We applaud President Trump for affirming his commitment to full and effective enforcement of our Buy America laws, and to addressing the issue of unfairly dumped and subsidized steel, in signing this Executive Order today.”

After ordering, yesterday, that the Keystone XL and Dakota Access pipelines be moved forward, President Donald Trump issued another executive order that required them, and all pipeline projects, to use only American-made steel.
Click Here for Current Metal Prices
According to Trump’s memo, steel produced in the U.S. must be used “for all new, expanded or retrofitted pipelines in the United States.”
It further defined “produced in the United States” to:

This definition differs a bit from the existing Buy American Act of 1933, which required the federal government to prefer U.S.-made products in its purchases. The Hoover administration-signed act was essentially extended to procurement for federal surface transportation products with the similarly named Buy America Act of 1983 during the Reagan administration.
[caption id="attachment_77899" align="aligncenter" width="550"] 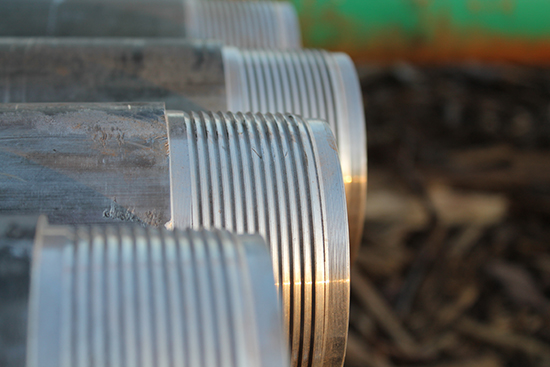 Buy American… If You Can

All kidding aside, according to the Buy American Act, in certain government procurement situations, the requirement to purchase U.S.-made steel may be waived by the contracting officer or the head of the contracting activity under certain conditions: If the domestic cost is 25% or more expensive than if foreign-sourced, if the product is not available domestically in sufficient quantity or quality, or “if doing so is in the public interest,” a virtual elastic clause that has allowed substitution on federal projects for decades.
That 25% can be a high hurdle. For Department of Transportation projects, the cost of the American component must be so high as to increase the entire project contract cost by 25%, not just the cost of the specific item. For example, in a bridge project, the cost of a U.S. girder would have to be so high as to increase the whole bridge project cost by 25%, something that rarely if ever happens.
On non-DOT construction projects under the Buy American Act, the Federal Acquisition Regulations (FAR) specify adding a 6% cost differential in comparing bids. The relevant section (48 CFR 25.204 section b) reads “Unless the head of the agency specifies a higher percentage, the contracting officer must add to the offered price 6% of the cost of any foreign construction material proposed for exception from the requirements of the Buy American statute based on the unreasonable cost of domestic construction materials…”
The Trade Agreements Act of 1979 also weakened the Buy American Act in that it, in many ways, supersedes it. The TAA allows the President to waive Buy American provisions under certain conditions. In general, any product is also TAA compliant if it is made in the U.S. or a “designated country,” which includes countries the U.S. has free trade agreements with such as Canada, Mexico, Australia and Singapore. If the Trans-Pacific Partnership would have passed that list would have expanded considerably.

There is no language in Trump’s memo that indicates any waivers for American-made steel would exist for trade-agreement countries. Or any countries for that matter. Like many things with our new President, however, this is just a memorandum and an opening of negotiations. There could be significant alterations made by the Department of Commerce which is tasked with actually developing a policy based on the President’s memorandum.
If such a pipeline policy is to be articulated, it’s also likely that the Congress would formalize it into law since Trump’s republican party has a majority in both houses of the legislature, although he could face a fight from free-trade advocates inside his own party.
Still, if this policy is adopted for at least the next four years even by only the executive branch it is, by far, the most stringent definition of “American-made” we have seen in federal steel procurement.
Note: This post was updated to add a fuller explanation of what “25%” means in federal projects. Thanks for a further clarification are owed to Frank S. Swain, Partner at Faegre Baker Daniels LLP in Washington, DC.

In addition to executive orders essentially reviving the Keystone XL and Dakota Access pipelines this morning, President Donald Trump signed a memorandum that will require the secretary of Commerce (his nominee, Wilbur Ross, still awaits confirmation) to come up with a plan to mandate American-made steel for all new, expanded or retrofitted pipelines in the U.S. The plan is due in six months.
Two-Month Trial: Metal Buying Outlook
“Going to put a lot of workers, a lot of steelworkers, back to work,” Trump said after signing the memo. According to the memo, “produced in the United States” shall mean:

Setting the stage for what could be the first clash between President-elect Donald Trump and Congress, House Speaker Paul Ryan and some congressional Republicans raised concerns about a provision in a bill that would require the use of American-made iron and steel for U.S. water infrastructure projects.

The bill, which provides billions of dollars in federal funding, initially included a requirement that federal money could largely only be used to buy U.S.-produced iron and steel. The provision has now been removed from the bill, after Ryan and others said the requirement would pick winners and losers among U.S. companies and shouldn’t be included in the final legislation.

Their concern is that the measure, which raises the threshold for how much of the steel-manufacturing process has to occur in the U.S., would direct federal funding to some domestic companies and not others.

The GOP opposition could draw fire from Trump, who said repeatedly on the campaign trail that the government should find ways to support U.S. manufacturers. On Wednesday, an amendment was introduced that would restore the buy-American requirement to a provision providing for $19.1 billion in drinking water projects.

Domestic Steel Shipments Up in October