If I had to pick a base metal to put my money on this year, it would have been aluminum. The lightweight metal presented an attractive bullish narrative due to the […]

In recent weeks the Dalian and Zhengzhou commodity exchanges and the Shanghai Futures Exchange have all toughened trading requirements several times.

The measures imposed include raising trading margins, hiking transaction fees and imposing trading limits in attempt to tamp down speculative trading. Reuters’ Clyde Russell referred to the situation as China having “thrown the world’s commodity producers and traders a massive party.” 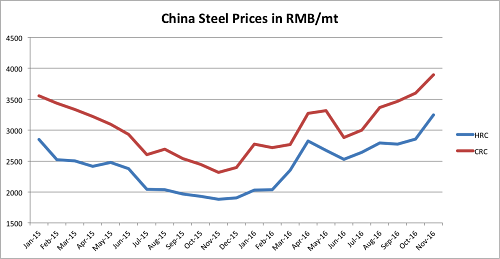 This year saw most analysts surprised by the strength of both China’s coal and iron ore imports, which led to rallies in the prices of both commodities. Chinese imports of iron ore jumped to the third-highest on record in November with 91.98 million metric tons up 13.8% from the previous month, taking the year-to-date gain to 9.2% compared with the same period in 2015, according to Reuters.

The coal import picture was even more robust in November. Coal imports of 26.97 mmt were the most in 18 months, and were more than double the imports recorded in November last year, according to preliminary Chinese customs data reported by Reuters. Coal imports have risen 22.7% in the first 11 months of 2016.

Prices are increasing on the exchanges as many analysts didn’t really believe that China would cut its domestic coal output, but did believe that it would close excess steel capacity as it has repeatedly promised … and promised some more. Capacity is down, but actual production? Those cuts haven’t really materialized, either.

China seems to have made an effort to cut back on the excess steel exports but — as often happens with commodities — trying to curtail production didn’t have the desired effect. Before November, China’s coal output was down 10% year-on-year, and steel capacity was cut by close to the government target. This did not lead to a corresponding drop in steel production, which was up 1.1% in the first 11 months of the year. The remaining steelmakers simply picked up production.

A similar thing happened with coal. Authorities in Beijing have made their desire for increased domestic coal output cuts clear, but the miners have struggled to deliver on said output cuts because they, reasonably, are making more money off of the high prices.

China is the world’s largest consumer of commodities and the increases felt in the People’s Republic are felt globally in the supply chains of most products Americans and other nations’ citizens consume.

One longtime, U.S.-based sourcing professional who works with suppliers in China told MetalMiner that his company is seeing prices for raw materials it sources from there up 70% for zinc, its Chinese steel prices up 60%, packaging costs up 50% and plastic resins such as polypropylene up 30% this year.

Some of those increases have to do with rising oil prices and the November Chinese imports surge is seemingly hiking prices across the board. Imports of crude oil to China recovered strongly in November to 32.35 mmt, according to Reuters, the equivalent to about 7.87 million barrels per day, which is above the year-to-date average of 7.53 million bpd.

Crude oil imports to China are about 14% higher so far this year, which represents an increase of around 925,000 bpd. Chinese imports of copper also surged, rising 31% to 380,000 mt in November from the previous month, the highest since June and a recovery from October’s near two-year low.

China’s central government probably feels it has little alternative than to rationalize thermal coal production which, a year ago, was suffering from some 2 million metric tons of overcapacity. The irony is that investment in coal mines would fall if the government would trim plans for new coal-fired power stations.

Yet in a market which has seen the world’s largest investment in renewable energy, Greenpeace is quoted in the Guardian newspaper saying China is adding two new coal power station projects each week across 10 different provinces. The environmental campaign group estimated in July that China already has up to 300 gigawatts of excess coal-fired capacity with another 205 gw under construction and plans for an additional 405 gw. As of July, China already had 895 gw in coal-fired power stations representing more than half its electricity generation London-based Carbon Tracker is quoted as saying.

Yet, much of this capacity is said to be running at far below optimum capacity and with atmospheric pollution heading the list of popular complaints further coal-fired power production is probably the last thing China needs.

Lately China has eased pressure to reduce coal production when it realized that a 250 mmt capacity reduction target for 2016 had already been met. A recent headline that China’s top coal province Shanxi pledged to shut 49 mmt a year of capacity by 2020 went on to admit that the plan aimed to simply replace outdated capacity with more advanced mines. Out of its annual 1-billion-mt production capability, the local government had committed to closing only about 10% by 2020.

Power demand growth in China has slowed from 10% five years ago to 3% or less. Now, factoring in continued high investment in renewables and nuclear, building more coal-fired power stations is likely to lead to considerable misallocation of capital in the years ahead.

In the meantime, though, investors are watching the coal price as a driver for aluminum futures. The doubling in thermal coal prices this year to a November peak has been a factor supporting aluminum prices in China. It’s kept them at a premium to prices on the London Metal Exchange. Thermal coal prices have dropped back slightly from their peak and, going forward ,much will depend on the extent to which Beijing allows or restricts coal production next year.

In July, China’s National Development and Reform Commission (NDRC), together with the national energy administration and coal safety supervisor, said the country would stop approving new coal projects in the next three years and urged local governments to eliminate more excess capacity.

Yet, if Shanxi province’s policy of replacing outdated capacity with more advanced mines is replicated elsewhere current levels of excess capacity should not justify current high coal prices. The rising prices through November may be more a function of generators restocking prior to the winter then any shortage of supply. An easing of prices in the spring could remove one plank of support for the domestic Chinese aluminum price by Q2 2017. We say “could” because logic doesn’t necessarily prevail in China’s commodity markets.

Chinese domestic coal prices increased slightly last month and port stocks fell from 23 days to 18 as power demand has rebounded to 7.2% year-on-year growth in March from 4.4% in the Jan-Feb period. Although thermal coal is imported for other uses than power generation, about half of all imports are consumed for power and power production has been rising inexorably in spite of variations in economic performance as this graph shows. FREE Download: The Monthly MMI® Report – price trends for 10 metal markets.

Fresh steps initiated by the Government of India could usher in reforms in the coal sector and reduce the gap between domestic demand and supply, something that has been universally […]

Continued from Part One. In addition to platinum group metals’ (PGMs) supply and prices getting hit by South African mining strikes, Kumba Iron Ore, a unit of Anglo American and among […]

Continued from Part One.  Coal accounts for 41 percent of global power generation, but the Indian scenario is more critical. Available figures suggest that coal accounts for more than half […]