Indian steel companies are trying to quickly sign long-term contracts to import coal at prevailing rates because they think that the coal prices in the international market may increase soon, according to a Business Standard article.

According to the reports, currently coking coal prices in international markets are down by some $10-$15 per ton to $220 a ton, as supplies from Australia have improved recently.

Citing commodity and currency analysts, the report says that Indian steel producers already have agreements for coal in overseas countries. A few steelmakers have even acquired coal blocks in other third-world countries to secure the primary fuel for their steel mills.

On the domestic front, the state-owned Coal India Limited (CIL) is the only source for coal supply for steel mills, power producers and other industries.

Power companies are the biggest consumers of coal in India and these companies are already facing huge fuel shortages. India is the third-largest producer of coal, but the CIL is unable to fulfill the demand — the coal miner is under pressure because of a huge demand/supply gap which has only increased on a year-to-year basis over the last several years.

According to rating agency ICRA Limited (formerly Investment Information and Credit Rating Agency of India Limited), the domestic demand-supply gap of coal may considerably widen in the medium- to long term.

As per India’s Annual Plan 2011-12, the total indigenous coal supply is planned at 559 million metric tons as against the estimated demand of 696 million tons.

However, at present, Coal India produces 436 million tons of the fuel and plans to enhance this capacity to 464 million tons by the end of the current financial year (2012-13).

It is believed that the gap in demand and supply from domestic sources would exceed 200 million tons by 2017, at the end of a five-year plan period.

India imports coal from Indonesia, Australia and South Africa. Until recently, Indonesia was the preferred choice for coal imports by the Indian firms, but as the new coal policy in Indonesia has revised prices, the Indian companies are trying to find other sources.

Now most Indian steel and power companies are looking toward Australia and South Africa for their coal imports. After recovering from flood situations and strike problems, Australia is offering attractive coal prices.

Chinese steel prices were flat for the day. The high and low prices of iron ore 58% fines from India ranged between $130 and $135 per dry metric ton. Chinese HRC held its value on Tuesday above $650 per metric ton. The price of Chinese coking coal stayed unchanged.

Chinese steel prices were flat for the day, while US HRC futures remained steady.

END_OF_DOCUMENT_TOKEN_TO_BE_REPLACED

With a decline of 2.7 percent on the LME to $365 per metric ton on June 15, 2012, the cash price of steel billet recorded the biggest shift of the day on our steel price index. Also on the LME, the steel billet 3-month price declined 1.5 percent to $370 per metric ton.

Chinese steel prices were flat for the day. The high and low price of iron ore 58% fines from India ranged between $125 and $130 per dry metric ton. Chinese HRC saw little change in its price last Friday, and for the fifth consecutive day, the price of Chinese coking coal held flat.

Profit margins of Indian steel companies may remain under pressure for the next few months, even as steel producers have urged the government to provide them export incentives to help battle overseas competition.

Cheap imports notwithstanding, steel companies currently face pressure on several other fronts including the one imposed by the largely falling rupee vis-a-vis the US dollar. A slowdown in sector growth due to lower demand by automobile and manufacturing sectors has also added to the woes of producers.

END_OF_DOCUMENT_TOKEN_TO_BE_REPLACED

This comes after clients told the LME to review and overhaul the way the LME billet contract works, due to disgruntlement over slow delivery times and the disconnect between physical and futures steel prices, according to Reuters.

Chinese steel and raw materials, including coking coal and iron ore prices, were flat for the day.

END_OF_DOCUMENT_TOKEN_TO_BE_REPLACED

On June 8, 2012, the day’s biggest mover on our steel price index was the LME steel billet 3-month price, which saw a 9.9 percent decline to $360 per metric ton. After two changeless days, the cash price of steel billet fell 7.8 percent on the LME to $359 per metric ton.

Chinese steel prices were flat for the day, but iron ore prices dipped below their usual range.

END_OF_DOCUMENT_TOKEN_TO_BE_REPLACED

Chinese steel prices and raw materials prices were mostly flat for the day, following a general dip over the past month.

END_OF_DOCUMENT_TOKEN_TO_BE_REPLACED

The monthly Raw Steels MMI® registered a value of 95 in June, a decrease of four percent from 99 in May.

The Raw Steels MMI® had held fairly steady between March 1 and May 1, but fell this past month along with all of the other MMI® index values. The Raw Steels MMI® baseline began on January 1, 2012 with a reading of 100. This report serves as the first public release of this data. 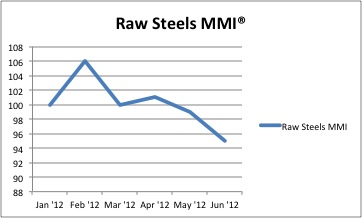 “For industrial buying organizations attempting to better understand the cost of steel products, this Raw Steels MMI® report covers the global raw material price trends impacting steel producers,” said Lisa Reisman, managing editor of MetalMiner. “Only by analyzing these input costs from a variety of global price drivers can a buying organization assemble a cost model reflective of the underlying price trends that most directly correlate to steel prices.”

“Steel held up comparatively well,” Reisman continued, “yet the European and Chinese slowdowns have had an impact on steel pricing; demand has started to slow in the US as well. We’ll need to see if this is a one-month market blip or a longer trend.”

The Drivers for the Steel Price Index Decrease

On the other side of the steel coin, Korean steel scrap shifted up 2.3 percent last month. The US HRC futures contract spot price rose a slight 0.8 percent over the past month to $660 per short ton.

The Raw Steels MMI® collects and weights 13 global steel and raw material price points to provide a unique view into global steel price trends over a 30-day period. MetalMiner will publish the monthly MMI® reports during the first week of the month, every month. Paid subscribers have access to all the data on the first of the month and can also obtain the actual price points for constituent elements that comprise the Raw Steels MMI®.

For more information on the Raw Steels MMI®, how it’s calculated or how your company can use the index, please drop us a note at: info (at) agmetalminer (dot) com.