In ironic twist of fate, the U.K.’s new nuclear-powered, nuclear-armed, nuclear deterrent submarine fleet (aptly named) after repeated government delays the Successor Class, is being made with French steel.

I suppose it could be worse. They could be made with Russian steel, but the reality is after closures of much of the U.K. steelmaking industry in recent years, there no longer remains a domestic steel manufacturer capable of producing the grades required for the critical outer pressure hull.

That material looks like it is to be supplied by Industeel of France. Not that France isn’t an ally of the U.K., a fellow European country, on the same and opposing side of countless wars with us over the centuries but it is, rather, a sad reflection on the U.K. that it’s gone from being one of the world’s great steel producers in the last century to the point where we cannot, now, even manufacture the grades necessary to make our own last line of defense. 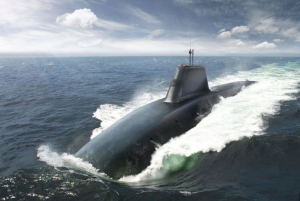 The project to build four Successor class submarines is conservatively budgeted to cost $53 billion (£41 billion) and will be built at BAE Systems’ plant at Barrow-in-Furness in Cumbria, the Telegraph reports.

We say “conservatively” because although this project is budgeted at £31 billion plus a £10 billion contingency fund previous Ministry Of Defense contracts, particularly Navy contracts, have run so over-budget final costs have often been twice the original budget. The government says it will create 30,000 jobs and become one the largest employers in Scotland.

BAE is cagey about where they intend to source their steel, in part because negotiations are ongoing and no significant orders have been placed yet, saying only it will be a mixture of European and U.K. suppliers, but it had to come clean on the material for the pressure hulls saying Industeel is the front runner for all four 15,900-metric-ton vessels, each of which will carry 16 nuclear missiles, the same as the current Trident-carrying Vanguard fleet.

The four Vanguard submarines, which have provided continuous at-sea deterrence since 1992, are due to be phased out in 2030, by which time the new Successor submarines will be competing to replace them. Like Vanguard, Successor will have a lifespan of at least 30 years, technological developments notwithstanding.