The Telegraph newspaper, while widely respected, has a tendency to shout doom and gloom at the first signs of potential trouble, but that doesn’t mean it is always wrong.

The paper, and particularly those articles of International Business Editor Ambrose Evans-Pritchard, have at times been quite prescient. So dire is his latest offering it should, maybe, not be dismissed as scaremongering for headlines sake. The article makes the point that dollar Libor rates are tightening across large parts of the global economy and will, if they continue, cause significant stress in credit markets and ultimately stock markets.

Three-month Libor rates have tripled this year to 0.88% as inflation worries mount, and the fear is that the U.S. Federal Reserve may have to raise rates uncomfortably fast. That’s leading to an acute dollar shortage, draining global liquidity. The paper quotes Steen Jakobsen, of Saxo Bank, saying “The Libor rate is one of few instruments left that still moves freely and is priced by market forces. It is effectively telling us that that the Fed is already two hikes behind the curve. This is highly significant and is our number one concern. This is a warning signal for the market and it happens extremely rarely,”

Sharp movements in the dollar Libor rate could have a profound impact on not just mortgage and business loans, but, apparently, it’s used as the basis for 90% of the $900bn leveraged loan market. Nor is this just a U.S. problem, some 60% of the global economy is linked to the dollar and the pain spreads rapidly to any country with a dollar peg or dollar borrowing.

Three-month interbank rates in Saudi Arabia have already risen to 2.4%, the highest since the global financial crisis in 2009 — although how much of this is due to dollar Libor and how much is due to the deteriorating financial position of the Saudi economy is unclear.

Underlying growth in the U.S., when one-off inventory effects are stripped out is currently near zero in the third quarter and slow elsewhere. The credit markets tend to smell fear long before equities wake up to the risk, the paper says.

This has been the pattern in each spasm of financial stress over recent years and the market’s reaction to the draining of liquidity from the system may well hit the equities markets at some point next year.

Earnings are falling and firms are stretching payments to suppliers in order to flatter operating cash flow, but a market-wide picture has to be built up like a jigsaw piecing data together. So news that the U.S. trucking industry said freight tonnage dropped 5.8% in September. That may be a one off, or may be part of a more worrying trend.

The Fed is well aware of the fragility of the system, though, that is why rates have not gone up this year and may well not rise next. Dollar Libor isn’t telling us we are facing a stock market crash, but it is suggesting rate hikes are just not a viable option anytime soon. In the face of slow global growth, the case for a bout of inflation appears less likely as each month goes by. 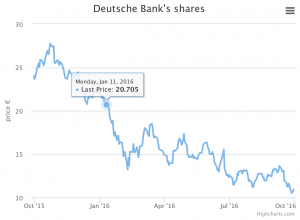 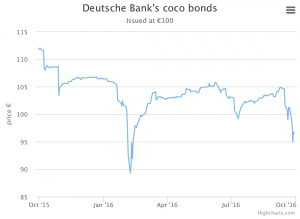 A recent article in the Economist explores the issue of commodity price benchmarks, those oft-quoted numbers that we take as gospel and, indeed, trillions of dollars of derivatives and contracts […]