There are two schools of thought. First, the current dip reflects a typical holiday slowdown and prices will hold or come back in September. In that scenario, buyers need to secure Q4 requirements and will return to ordering in September. On the supply side, mills are taking downtime in October and Q4 for maintenance, there is still some idled capacity (U.S. Steel and AK Steel) while higher-than-expected final HRC duties and tariffs will keep out imports. The steel market will, therefore, tighten and prices will hold at the current high levels. 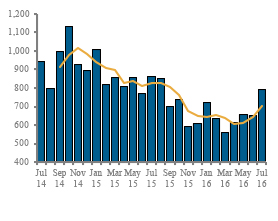 Steel-Insight could not disagree more. While we don’t expect freefall just yet, we do expect HRC prices to be back in the high $300s/ton at some point next year.

The problem is primarily on the supply side. For demand, the July Metals Service Center Institute number indicated that flat-rolled shipments out of distributors were down 10% year-on-year, but fundamentally automotive shipments are pretty good, while white goods and construction are supportive. Oil and gas and capital equipment aren’t that great, but overall demand should be higher this year. 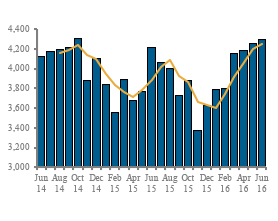 Don’t believe the American Iron and Steel Institute utilization figure. At 75%, it would suggest operations are well below maximum capacity, yet flat-rolled shipments are back to peak levels (see above).

On the import side, volumes are already creeping back up and we would expect that to accelerate into Q4. The arbitrage between U.S. and international prices only really widened in Q2 and it takes some time for the imports to arrive.

Meanwhile, our analysis suggests that the anti-dumping action will not be as watertight as some suggest. First, some material — for example, Taiwanese hot-dipped galvanized — was excluded. Second, some material — Turkish HRC — will have a duty of less than 10% and can continue to access the market.

Third and finally, even some suppliers with high tariffs such as POSCO in HRC may not have to pay it as it is supplied to its UPI subsidiary and could therefore be excluded. Finally, alternative suppliers such as Vietnam in HDG have already appeared and are now well-established.

Finally, the July MSCI numbers highlighted that inventories are already turning up and destocking is now over.

So, while demand is flat, supply is on the increase. The high prices mean strong profitability and therefore domestic mills will maximize output. Meanwhile, the arbitrage is strong enough to justify shipping to the U.S. and there are enough holes in the anti-dumping duties to allow material in.

The result will be that inventories will continue to accumulate and, at some point, distributors and customers will stop buying and prices will collapse back down below $400/ton. The market (thanks to the shutdowns and some Q4 buying) may see only limited downside in the short term, but will drop significantly in 2017.