For some time now, a debate over the use of rebar, specifically or Glass-Fiber Reinforced Plastic (GFRP ), instead of other forms of steel reinforcement, has been on in Asian industry circles.

Recently, two events seemed to inflame this ongoing debate. Galvanized rebar was part of the topics taken up for discussion at an international meeting on galvanized steel in India, while a research report, released about the same time, talked of the latest trends in the market in the increased use of GFRP rebar. 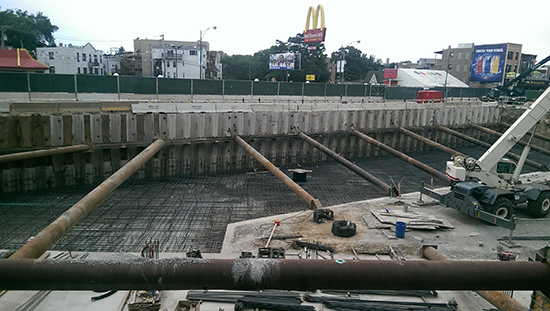 Galvanized steel is the gold standard for construction rebar such as this rebar web waiting for a concrete pour. Can glass-fiber reinforced plastic seriously compete? Photo: Jeff Yoders.[/caption]

The second international galvanizing conference in Kolkata in eastern India saw participation from a cross section of zinc and alloy industries, including the U.S. Delegates talked about ways to expand the zinc market in India and also how to use zinc in automobile industries, fertilizers, and in rebars.

The Indian Government is showing some interest in the role of zinc in building important infrastructure such as bridges. India’s demand for galvanized steel structures will keep rising because of its growing infrastructure. Steel becomes rust-proof (or corrosion resistant, as the industry says) when coated with a layer of zinc, hence galvanization. If done properly, galvanization extends the useful life of rebar and other products for decades.

Stephen Wilkinson, Executive Director of International Zinc Association, attending the conference, pointed out that automakers in Europe, North America, Korea and Japan had been using galvanized steel for body panels for a long time. But many Indian manufacturers offered no such protection for cars made for the Indian consumers.

The global galvanized steel market, according to a report from Sandler Research, was likely to grow at a compound annual growth rate of 5.18% during 2016-2020.

According to a press release, the 72-page market report analyzing 27 major companies surmised that one of the primary drivers in the market was the upgrading existing transmission and distribution networks.

Is There Rebar Market Room for Growth?

The Asia-Pacific region was the fastest-growing market for galvanized steel and was anticipated to occupy around 68% of the overall market revenue by 2020. The primary reason for this region’s growth was the high demand for galvanized flat-rolled products coming from the automobile and construction sectors. Moreover, with China being the largest producer of galvanized steel market especially metal-coated steel sheets, it will accelerate steel production in the region in the coming years.

One of the trends in the market, according to the report, was the increase in the use of GFRP rebar.

The report said the process had significant advantage over traditional steel rebar. Such rebar would, in the future, take over a major portion of the market share of galvanized steel. GFRP rebars are made of naturally corrosion-resistant material and have high-strength glass fibers bound by epoxy resin. These do not require extra concrete cover or anti-shrink additives, thus making them not only cost effective, as compared to galvanized steel, but also rust-free unlike steel rebar.

But the debate over the use of GFRP rebars continues despite such occasional research reports. Their use as a potential replacement for steel reinforcement has raised the hackles of a section of engineers engaged in civil projects. The GFRP rebar may have some advantages, but a question mark hangs over its use, for example, in the construction industry, due to the rebar’s low modulus of elasticity, among other things.