The Global Precious Monthly Metals Index (MMI) rose by 2.9% for this month’s value, as gold prices picked up amid the ongoing Russia-Ukraine war. 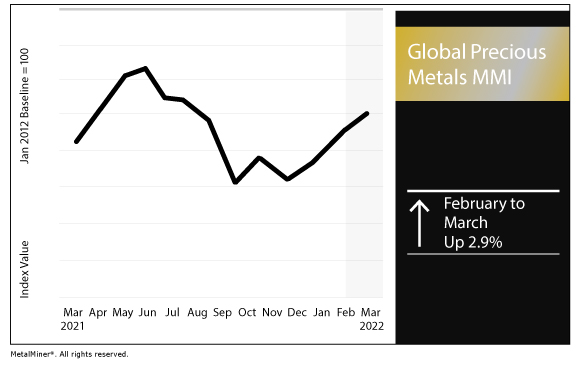 The March 2022 MMI report, featuring all 10 MMI indexes, will be available for download later today.

February proved a difficult month for stocks, as the S&P 500 fell over 5% and the Dow Jones Industrial Average fell 6%.

In times of volatility, investors often flock to safe-haven assets, including gold. On top of historic levels of inflation — at 7.9%, the highest in over 40 years — the Russian invasion of Ukraine introduced another jolt of volatility to markets.

The U.S. gold price opened February at just over $1,800 per ounce before rising through the rest of the month.

Gold prices have continued to surge in March. The price reached $1,980 per ounce to close last week, marking an 8.39% month-over-month rise. 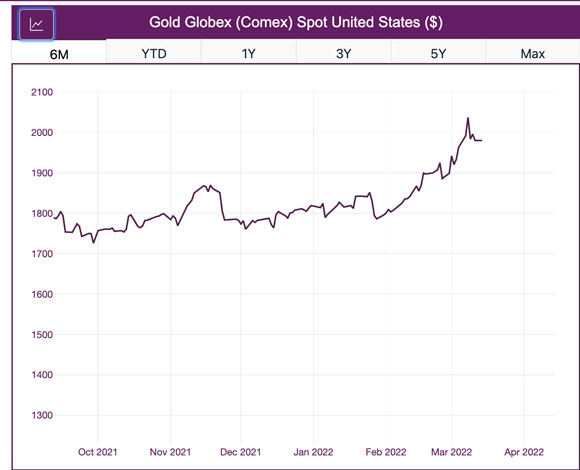 However, on March 7, COMEX announced it would suspend the “approved status for warranting and delivery” for several Russian gold and silver companies, including:

END_OF_DOCUMENT_TOKEN_TO_BE_REPLACED

The Automotive Monthly Metals Index (MMI) fell by 0.7% for this month’s value, as palladium prices have surged while steel prices have retreated. 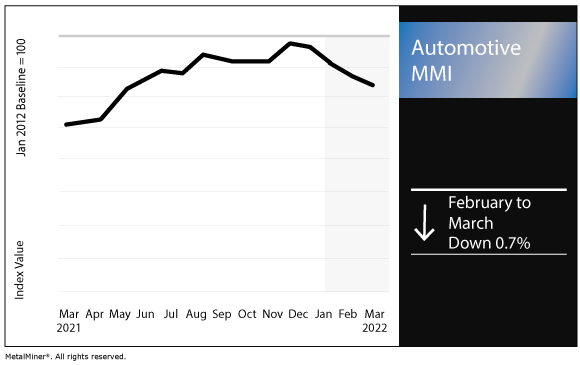 The Russian invasion of Ukraine has yielded commodity price volatility spanning across sectors. 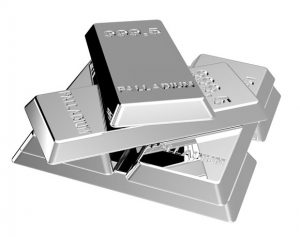 Russia is a major producer of platinum and palladium. Palladium primarily goes toward catalytic converters in car exhausts.

As Western countries hit Russia with sanctions, some companies will have to look for alternative sources. (As always, buying organizations should make sure they are up to date on the best sourcing strategies.)

Palladium prices have surged in recent weeks, rising by 13% month over month as of Friday.

“Russia and Ukraine lead global production of metals such as aluminum, nickel, copper, and iron ore,” according to a special report by Dun & Bradstreet titled “Russia-Ukraine Crisis: Implications for the global economy and businesses. “Nonavailability of Russian as well as Ukrainian supplies could cause high prices along with volatility. For rare metals like neon, palladium, and platinum, Russia has been the primary supplier to Europe. Ukraine is also a vital source of rare metals (iron ore, manganese, titanium, gallium, kaolin, zirconium, and germanium) to Europe and the rest of the world.”

On the other hand, platinum typically goes into diesel catalytic converters. Russia is also a major producer of platinum.

As the Dun & Bradstreet notes, South Africa is a potential alternative source of platinum for automotive manufacturers (or other platinum end users).

END_OF_DOCUMENT_TOKEN_TO_BE_REPLACED

While much of the world still depends on fossil fuels, demand for battery metals is surging.

Battery metal demand on the rise 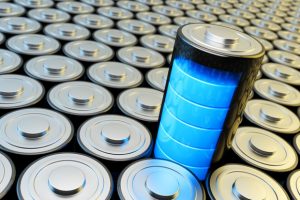 “While not yet having material impact on internal combustion engine vehicle sales, increasing demand for battery metals to meet requirements for electric vehicle production is already starting to have substantial implications for battery metal supply,” the South African firm said.

In short, the world will need to expand supply in order to meet that rising demand.

Demand for a variety of critical metals needed for the transition to renewables will be significant. Demand for everything from copper to cobalt is set to skyrocket, the IEA explained its in report titled “The Role of Critical Minerals in Clean Energy Transitions.”

Today’s supply and investment plans for many critical minerals “fall well short” of what will be needed, the IEA said.

With demand set to increase many times over in the years ahead, there will need to be additional investment.

“The resultant increased demand for battery metals to support a prolonged expansion of the global battery electric vehicle (BEV) fleet over the next two to three decades, is going to require commensurate increase in the supply of battery metals,” Sibanye-Stillwater added. “Primary expansion of the scale needed to meet BEV growth projected by some market commentators, will be challenging.”

Steps toward the future

South Africa accounts for 70% of global production of platinum, used in catalytic converters to curb harmful emissions from automotive exhaust.

The South African firm touted its various efforts in the battery metals space. The firm acquired an initial stake in the Keliber lithium project in Finland. Furthermore, it made a proposal for the acquisition of the Sandouville nickel refinery in France.

Sibanye-Stillwater reported platinum and palladium production from its U.S. operations of 298,301 ounces for the six-month period ending June 30, 2021.

END_OF_DOCUMENT_TOKEN_TO_BE_REPLACED 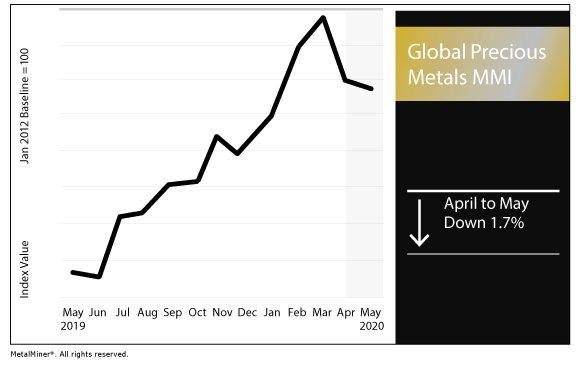 With some states beginning to reopen and ease restrictions put in place to curb the spread of COVID-19, interest in gold as a safe-haven asset has picked up.

After falling below $1,500 per ounce in March, the gold price eventually surged ahead of the $1,700 per ounce threshold, around which it has settled since mid-April.

As Kitco News reported, the gold price did not react in any significant way to the recent stretch of historic unemployment claims in the U.S. — nonfarm payroll employment fell by 20.5 million in April alone, the Bureau of Labor Statistics reported — because the news was largely expected.

It remains to be seen how various states’ plans to “reopen” their economies will progress given the still-elevated number of cases and deaths in some regions of the country.

Elsewhere in the precious metals basket, MetalMiner’s Stuart Burns delved into the recent surge in the gap between gold and silver prices.

In short? Investor interest in silver ETFs has gotten a boost.

“The Financial Times reports on the dramatic rise in silver ETF holdings as investors bet on a rally in silver after the gap between gold and the industrial metal soared to its widest level in more than three centuries,” Burns wrote.

“The article states that in March the price of an ounce of gold was 125 times higher than the same amount of silver — a record going back to at least 1687.

“Since then, the gap has closed to about 113 times, as silver rose to $15 per ounce; Bank of America is reported as predicting silver could top $20 over the next year.”

Miner Newmont Corporation reported first-quarter gold production of 1.48 million ounces, up 20% from Q1 2019, “primarily due to new production from the Goldcorp assets, partially offset by the sale of Kalgoorlie in Australia and lower ore grade milled at Ahafo, Yanacocha and Merian.”

Newmont benefited from rising gold prices (gold is up approximately 12% since the start of this year).

In operational news, Barrick is currently in a dispute with the government of Papua New Guinea over its decision not to extend the lease for the Porgera gold mine. The open pit, underground gold mine is a joint venture operated by Barrick (47.5% stake), Zijin Mining Group (47.5%) and Mineral Resources Enga (5%).

“Since the end of the quarter, the government of Papua New Guinea has announced that it will not renew Barrick Niugini Limited’s 20-year Special Mining Lease for the Porgera gold mine,” Barrick said in its earnings report. “Barrick has said it will contest the move, which it regards as tantamount to nationalization without due process. In the meantime, BNL has placed Porgera on temporary care and maintenance. In addition, due to the uncertainty related to the timing and scope of future developments on the mine’s operating outlook, we are withdrawing our full year 2020 guidance for Porgera at this time.”

Reuters reported Bank of America Merrill Lynch analysts forecast a global deficit in platinum and palladium this year as a result of mine closures in top platinum producer South Africa.

Earlier this month, however, the government began to ease restrictions, allowing for some stores to reopen (mines had already been permitted to operate at 50% as of late last month).

“Yet, while a nation-wide lockdown is probably the most effective means to contain the spread of the coronavirus, it cannot be sustained indefinitely,” Ramaphosa said April 25.

“Our people need to eat. They need to earn a living. Companies need to be able to produce and to trade, they need to generate revenue and keep their employees in employment.

“We have accordingly decided that beyond Thursday 30 April, we should begin a gradual and phased recovery of economic activity.”

Meanwhile, Impala Platinum reported a 6% drop in production for the first quarter of calendar year 2020.

“The implementation of the lockdown is estimated to have resulted in a 6% reduction in reported milled tonnage from each of Impala, Marula and Two Rivers, equivalent to approximately 26,000 ounces of 6E mine-to-market concentrate production during the quarter,” Impala said in its quarterly report. 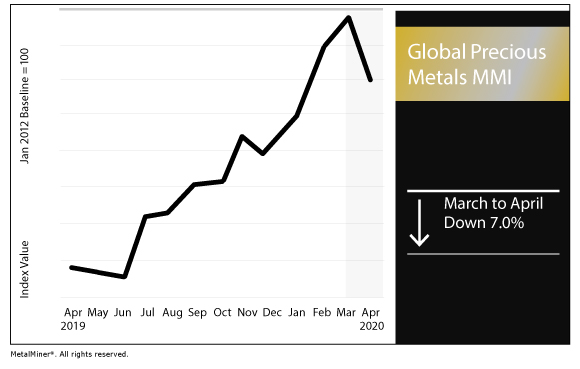 END_OF_DOCUMENT_TOKEN_TO_BE_REPLACED

The price of all precious metals plummeted on Friday and again on Monday as investors sort to liquidate profitable positions to raise cash.

Gold, in particular, has been the victim of its own success, rising strongly this quarter on the back of growing investor anxiety about the wider economy.

END_OF_DOCUMENT_TOKEN_TO_BE_REPLACED 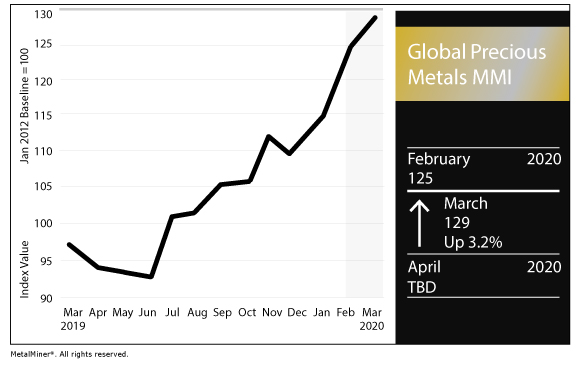 END_OF_DOCUMENT_TOKEN_TO_BE_REPLACED

Precious metals leave base metals in the shadows

We have covered the precious metals and palladium, in particular, a few times over recent months, not because we have suddenly become PGM investors (although looking at price performance, that would have been a fortunate move) but simply because they are the only metals sector showing any real dynamism.

The base metals have at best been lackluster. Aluminum has been range-bound for much of the last nine months, as has most of the base metals complex.

Copper has perked up since about November on the back of expectations of a thaw in U.S.-China trade relations. Nickel got interesting toward the back end of August when the market reacted to news of an Indonesian export ban but has since sunk back.

Only the precious metals have risen and sustained their rises during the period — albeit for differing reasons.

END_OF_DOCUMENT_TOKEN_TO_BE_REPLACED

The Global Precious Monthly Metals Index, a basket of precious metals, gained five points for a January MMI reading of 110. 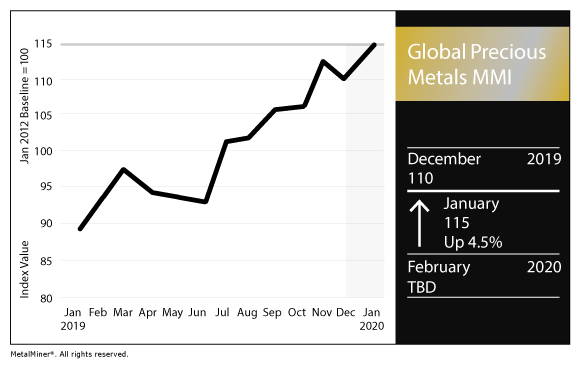 “Power cuts earlier this year pushed the country close to recession,” Burns wrote. “The most recent outages have intensified over the last 36 hours, as heavy rains have flooded some power stations.

“Multiple failures affecting about a quarter of the country’s power plants have forced the utility to introduce severe rolling ‘stage 4’ cuts of 4,000 megawatts of power on Tuesday of last week, but it was still scrambling to fix breakdowns affecting another 15,000 megawatts — roughly a third of its generating capacity — by the end of the week.

“The rolling blackouts were escalated to stage 4 on Friday last week, with a rise to stage 6 (a complete loss of power) bringing many mining companies to a complete halt.”