No one factor has led to the turnaround in the fortunes of Europe’s steelmakers. While still not spectacular, global growth is certainly broader-based and better distributed that it was a […]

President Donald J. Trump has completed his first 100 days in office and thus far has signed into law 28 pieces of legislation. While Trump has made traction in some […]

We are at the point in the commodities and steel price cycle where many long-product mills are losing money. 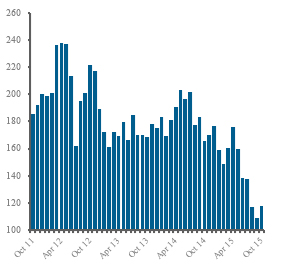 That math is simply not sustainable. Mills are losing up to $50 a metric ton. They are financing this from good profits made earlier in the year and from existing lines of credit. However, to keep going (and lose more money) they need more credit.

In Turkey, the spread between scrap and rebar is around $160 per metric ton. Thanks to the devaluation of the Turkish lira, big mills may be covering costs, but smaller or less-efficient mills are bleeding money. Many are up for sale, but we don’t see any buyers.

Survival of the Fittest

In Europe, mills have no pricing power and scrap-rebar spreads are dropping to less than $200 a metric ton with some mills in southern Europe getting even less than that. Once again, only the most efficient can break even on that. Instead, they are buying Chinese billet and hoping to make a few bucks to tide them over. Not a long-term strategy.

Even in the US, price competition among southeast mills is driving down profitability to the extent that restructuring may be needed for older mills with high labor costs, high power costs, low utilization rates and inefficient operations.

Closures have already taken place. Stefana closed in Italy, ArcelorMittal Georgetown in the USA, Haixin Steel in China – but they are minimal in the context of overall capacity. Moreover, despite the fact that these were high-cost producers, it is not unthinkable that there will be efforts to revive them.

No One Wants to Be the First to Go

The benefits of bankruptcy are felt by competitors that can take market share, while the incentives to remain in production range from jobs to bankers hoping that they don’t have to recognize losses. That is what makes downturns in the steel industry last for such a long time.

Hopes that an improvement in demand will lift all boats seem misplaced. Adding to debt right now may only result in a bigger bust later. The tide is going out and some people have been swimming naked.

Just when iron ore miners thought sentiment couldn’t get much worse, Goldman Sachs Group comes out with a report predicting iron ore prices will tumble by 30% over the next 18 months according to a Bloomberg article this week.

The bank is saying the rebound seen over the last five weeks is merely a blip and that normal business will shortly resume. 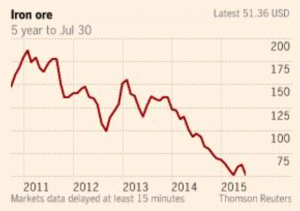 Supply growth is set to continue, the report states, but, and this is crucial, China has reached peak steel and from now on steel production will only contract in China.

As shipments pick up from Australia, Brazil and India, the seaborne market will become awash with inventory and prices will be further driven down. Iron ore is seen by Goldman as averaging $49 a ton this quarter, and $48 in the final three months of 2015. Before falling further next year to $46 in the first quarter and $44 the following quarter. With little or no market discipline, the bank suggests 2016 will see average prices around $44 per ton. In the words of the report’s authors “the summer of 2015 is the calm before the storm.”

Steel consumers can, therefore, expect mills’ raw material prices to continue to weaken as seaborne prices gradually knock on to contract prices elsewhere. With demand lackluster and too much finished steel chasing too few orders, even as markets like North America and Europe show encouraging signs of GDP growth, steel prices will have little to support them this year and next. Good news for consumers, tough times for producers working with low-capacity utilization and stronger domestic currencies sucking in imports.

India’s automotive industry, right alongside the country’s steel sector, is suffering a crisis. A downturn in the domestic economy and the falling value of the Indian rupee versus the US […]

A debate is going on among Europe’s steel producers about how best to save the industry. All of them agree that with demand down some 30 percent below pre-crisis levels […]

It’s a tale of two nations trying to protect their domestic steel industries. Recently, Thailand decided to continue with the imposition of a “provisional safeguard” duty on the import of […]

We here at MetalMiner are no strangers (in the night) to the relationship between the steel and automotive industries in the United States. (Sorry for the parenthetical – had to […]

MetalMiner has extensively covered the trend of light-weighting in the automotive industry as it pertains to the growing use of aluminum and high-strength steels. But sometimes the battle extends beyond […]

ArcelorMittal posted a US$ 3.7 billion loss last year, largely on the back of falling sales in Europe and China. In comments to a domestic publication reported in the FT, […]