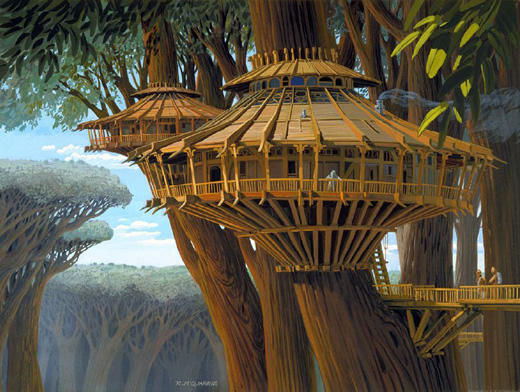 A wookiee cultural center nestled deep in the trees of Kashyyk. Why don’t we get Pete Nelson to design treehouses for all of us? Painting by the incomparable Ralph McQuarrie. Source: Lucasfilm.[/caption]

Wookiee civilization, as depicted in the “Star Wars” films, is an advanced, highly sophisticated one. The ape-like humanoids have all of the intelligence of the human characters in the movies, save the ability to vocalize and speak in a language that isn’t moans and growls.

At various times, Chewbacca is shown performing complicated mechanical repairs to spaceships, driving imperial vehicles which would be foreign and impossible to operate by a lesser being and conversing in the wookiee language with Han, who seems to understand the complex series of moans, grunts and growls that make it up due to living among wookiees for so long. 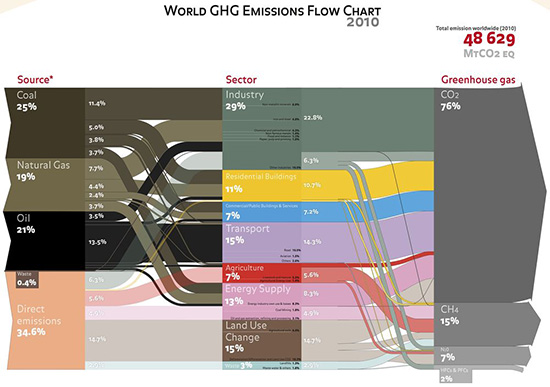 World greenhouse gas emissions by industry in 2013. Click the image for the full chart. Source: Ecofys.[/caption]

We could discount the construction habits of, say, the ewoks because they are a primitive race that’s not beyond using spears and stones for hunting and beating up inept stormtroopers… not so with wookiees.

The wookiees can be assumed to know about concrete, steel and all of the building materials we generally use for tall buildings and have, instead, chosen elaborate, tall wooden structures built in the miles-high trees of their homeworld, Kashyyyk, instead. They’re like the Chinese. They KNOW about the fork, but they are sticking with chopsticks all the same.

Wood vs. Steel and Concrete

In recent years, wooden building products — particularly heavy glue-laminated (glulam) timbers that can replace steel beams and joists in the frame of a skyscraper — have gained a following among architects and engineers who build tall buildings. There was an initial push by building product manufacturers to get more wood specified in tall buildings after the bottom fell out of the housing market in 2008, leaving distributors with mountains of unsold wood framing products.

The cause was quickly turned celebre, as the French say, by the environmental movement whose adherents quickly seized on the opportunity to cut the relatively dirty and carbon dioxide-heavy processes of concrete mixing and steel mining and forming out of skyscraper construction. Make sure you hug the timbers, as the TedTalk linked above advises.

One cubic meter of wood will store one ton of carbon dioxide and, from a climate change perspective, wood makes a compelling case. If we need to move to an ethic of growing our homes, wood is much better than steel or concrete. Taking advances from concrete construction, large wood panels can be tilted up onsite to form structural members as tall as 30 stories.

What about fire, you ask? Mass timber and other glulam products burn slowly and predictably and in a way that can be contained so that the fire hazard is minimized. There is little doubt that we can build wooden skyscrapers. The bigger question is, should we? Leaving aside, for a moment, how much deforestation will be necessary to create full cities of wooden skyscraper frames and exteriors, shouldn’t we rethink tall building design at the same time?

Why Skyscrapers At All?

The process of creating a 10-to-hundreds-of-stories-tall building was disruptive in the early 19th century but it was so because of the innovation of the steel frame. Why not discard the boring framing box that celebrates the qualities of steel and truly embrace the organic forms that can be created with glulam timbers? Just look at what this clown wrote about and how pretty it is.

Why not even use LIVING redwood trees as foundations just like the wookiees!

It would mean cutting down fewer trees, less deforestation and, I’ve seen Treehouse Masters, better buildings! Who wouldn’t want to live in a space crab? Sure, humans aren’t as good at climbing trees as wookiees but I’ve seen the staircases and ladders Pete Nelson designs. The wookiees would be proud.

All kidding aside, wood vs. steel and concrete for tall buildings is a battle among building product manufacturers that has already begun and will continue to rage for years. It’s hard to calculate how much diesel fuel, logging and yarding equipment would be necessary for mass deforestation to create whole cities of wood products but it certainly wouldn’t be great for the environment, either.

Sure, the resulting products would still likely have less of a carbon footprint than steelmaking or concrete production, but it would also require a massive expansion of wood (read tree) production. That means more trees created just to cut down, more people employed to plant and cut, shorter growth cycles and more land devoted to non-native trees. That means less habitat for animals that live in the forest today. The wookiees cousins, great apes, might even be displaced.

Is that really scalable? It’s a question similar to that of all northern climates switching to woodburning ovens. Would we really want such a solution for everyone? How long could we produce the wood and at what cost?

Companies such as Weyerhauser see an opportunity … it might not be as sustainable as they are promising.