This morning in metals news: production has resumed at Tenaris‘ steel plant in Koppel, Pennsylvania; meanwhile, Anglo American said it has demerged its thermal coal operations in South Africa; and, […]

This morning in metals news: US energy consumption fell by 7% in 2020; the United Steelworkers union commented on the details of President Joe Biden’s American Jobs Plan; and the […]

After dipping slightly the previous week, US steel capacity utilization jumped to 77.6% for the week ending March 27, the American Iron and Steel Institute (AISI) reported. The MetalMiner Best […]

Pittsburgh-based Alcoa Corporation announced it had reached a tentative agreement on a four-year labor deal with the United Steelworkers union, a deal covering five locations and 1,700 employees. Need buying […]

This morning in metals news, the United Steelworkers union is reportedly not happy with U.S. Steel’s latest contract proposal, Vice President Mike Pence touts a steel resurgence in Michigan and […]

As we reported yesterday, the The United Steelworkers union has reached a tentative four-year agreement with Allegheny Technologies, Inc., after 2,200 workers were locked out more than six months ago.

ATI confirmed the agreement but said little else in a statement that read, “Allegheny Technologies Incorporated confirmed today that it has reached a tentative agreement with the bargaining committee of the USW on a new contract covering over 2,000 employees at the company’s Flat Rolled Products business and other locations.”

The specialty steelmaker also noted that voting on and ratification of the agreement could take two or more weeks. The lockout involved workers at 12 plants in 6 states. The agreement involve the union dropping a complaint before by the National Labor Relations Board, a USW spokesman told the Pittsburgh Post-Gazette.

The USW, however, was already claiming a “victory” for the locked out workers.

“This is a tremendous victory for a very brave group of workers. They should be proud of this agreement, and of the resolve they demonstrated throughout this six-month ordeal,” said USW International President Leo W. Gerard in a statement. “They showed us all the strength that we can have when we stand together in unflinching solidarity.”

ATI would like to get back to selling shipping stainless steel. Source Adobe Stock/Jovanning.[/caption]

Very little is known yet about the actual agreement other than its length (four years). USW VP Tom Conway, who was the union’s top negotiator, said, “It’s a good agreement. I am confident they will ratify, and I think our folks are anxious to put their lives back together again.”

What will happen to operations that were idled during the lockout is also anyone’s guess. 270 Union workers at ATI’s Midland, Pa., plant — which the company had continued to operate with management and temporary employees before idling it last month — stand to lose their jobs if the plant stays on the commodity stainless sidelines.

The company has said the facility could remain idled for months until it can turn an acceptable profit as commodity stainless prices have fallen below ATI’s profitability threshold. ATI similarly announced plans to idle its Gilpin Township, Pa., GOES production facility in April, which had employed a similar number of union workers before it was staffed with replacements during the lockout. If ATI stays out of the GOES business then AK Steel will be the sole US producer of the important products used for electrical transmission.

ATI’s “last, best and final offer to the USW,”before the lockout, included, ”$4,500 in lump-sum payments over the four-year agreement and continued incentive programs for ATI Flat Rolled Products employees, who averaged $94,000 in earnings in 2014.”

The proposal also included what ATI characterized as “affordable solutions for continued family healthcare, at about half the cost that the average American worker pays.”

The USW, at the time, did not agreed with ATI’s average earnings calculation and did not support giving new hires different benefits than employees who are grandfathered in under previous agreements, another sticking point between the union and the steelmaker.

Over 2,220 United Steelworkers (USW)-represented Allegheny Technologies, Inc. (ATI) workers in six states have been locked out since August 15.

The locked-out workers lost their ATI health benefits on November 30. For most of them, unemployment benefits ended on February 15th. The Pittsburgh regional office of the National Labor Relations Board (NLRB) has issued a complaint that the lockout is illegal. Last week, ATI issued a statement that said they believe that the work stoppage is legal, citing a lack of progress in contract negotiations. 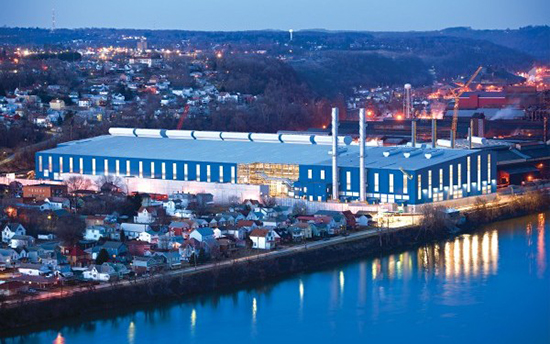 ATI points to its Brackenridge facility as the future. Source: ATI[/caption]

Furthermore, ATI contends that the allegations in the complaint are unsupported by fact or law, and that “ATI will vigorously challenge the complaint through (the) appropriate legal process.”

According to the USW website, the NLRB complaint alleges that ATI bargained in bad faith and over permissive demands, both before and during the lockout.

According to the USW, under the National Labor Relations Act, a company is prohibited from locking out workers over permissive demands, which are bargaining demands that do not relate to terms and conditions of employment. ATI stopped bargaining on Aug. 6 and presented the union with a “last, best and final” contract offer that same date.

ATI contends the lockout occurred because the USW negotiating committee did not accept the company offer by August 10 and did not allow ATI employees to vote on it. The USW characterized this as an “unlawful ultimatum” which resulted in the company locking out its workers.

Furthermore, the USW website contends that ATI started planning for a lockout in January, before contract negotiations began, meeting with outside consultants hired to recruit replacement workers and that ATI “forced union members to sit through captive-audience meetings aimed at intimidating them into accepting concessions.”

Meanwhile, ATI and the USW have returned to the bargaining table, but there have been no reports of an agreement being reached. According to an ATI press release from August 15, ATI’s aforementioned last, best and final offer to the USW, included, ”$4,500 in lump-sum payments over the four-year agreement and continued incentive programs for ATI Flat Rolled Products employees, who averaged $94,000 in earnings in 2014.”

The proposal also included “affordable solutions for continued family healthcare, at about half the cost that the average American worker pays.”

The USW has not agreed with ATI’s average earnings calculation and does not support giving new hires different benefits than employees who are grandfathered in under previous agreements.

This “two-tiered approach” would enable ATI to replace retired employees with contract labor, replace pensions with 401(k) plans and have employees bear more of their own health insurance costs.

The current bargaining position of either side has not been articulated, but the USW’s leverage seems to be waning. ATI has already idled its Midland, Pa., plant — a commodity stainless facility — and its Bagdad GOES production facility in Gilpin Township, Pa.

ATI reported a net loss of $378 million for 2015 as compared to a net loss of $2.6 million in 2014. ATI’s Flat Rolled Products business segment is to blame for the staggering losses. Operating losses for flat-rolled products were $242 million for 2015 which, in my opinion, were due in large part to plummeting nickel prices, not the contracting of replacement workers.

Richard Harshman — ATI’s chairman, president, and CEO — stated that ATI is taking “rightsizing actions” to return the segment to profitability as quickly as possible and “execute our strategy for sustainable, long-term, profitable growth.”

ATI’s current cost position is at a disadvantage to North American Stainless and Outokumpu’s Calvert, Ala., plant, both of which are single site and also non-unionized. The only benefit ATI may have in the future is that anti-dumping and countervailing duty petitions were filed last week against Chinese stainless sheet and strip.

This is sure to reinforce base price increases for the U.S. mills and may aid ATI in getting back in the commodity stainless game sooner than expected. ATI’s Flat Rolled Products division was one of the four U.S. mills petitioning the U.S. Department of Commerce and the International Trade Commission to investigate U.S. imports of Chinese stainless sheet and strip.

MetalCrawler’s latest news today includes an agreement in the oil strike that’s had managers camping in at a refinery in Toledo, Ohio.