See the latest multimedia version of this story here. This is our final top-rated post of 2016. Chinese market economy status was a huge issue for the entire year and […]

United States Steel Corporation’s CEO Mario Longhi made the media rounds recently, evangelizing U.S. Steel’s – and most of the domestic industry’s – key plank in their policy platform: creating a globally fair playing field when it comes to international trade. 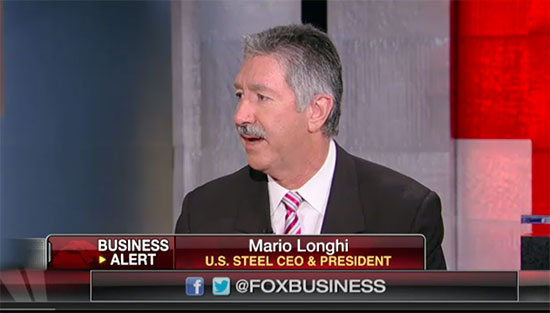 He showed up on Maria Bartiromo’s show, denouncing unfair subsidies in foreign economies and tariffs on certain US imports into countries such as China. He also spoke to Politico about the granting of “market economy” status to China next year, which would change how the Commerce Department determines anti-dumping duties on Chinese goods, including steel.

As you may know, China is pushing a bunch of steel beyond its borders. As my colleague Stuart Burns reports, while China’s steel production may have dropped, its exports have risen. In the first 8 months of this year, product exports reached 71.87 million metric tons, up 26.5% compared to the same period of 2014.

In fact, the China Iron and Steel Association’s vice chairman is quoted as saying that this year, the country will export more than 100 mmt of steel – that’s equivalent to more than the entire production of North America. Or nearly as much, purely in exports, as the next largest producer, Japan, produces both for domestic and export combined, according to Burns.

Mainly, however, Longhi pointed to the definition of “injury,” and how a measure within the TPA passed earlier this year has made it easier for US producers to prove injury within a potential trade case – which, in turn, should lead to even more steel trade cases brought against China, he told Politico.

The Trade Preferences Extension Act, passed by President Obama at the end of June 2015, ended up revising the injury standard mentioned by Longhi.

“[Before], there was a perception that you had to prove so many consecutive quarters of losses before bringing a good trade case to the International Trade Commission (ITC),” said Estelle Tran, associate editor at Platts, in a recent webinar. “This [bill] defines material injury, not necessarily that the company or industry was not profitable.” Also, the fact that a company’s or industry’s “recent performance has improved” cannot work against their case under the new rules.

The big question becomes, even with the new “injury” definition, will trade cases work to the benefit of US producers and manufacturers?

Let’s look to past performance. Phillip Bell, president of the Steel Manufacturers Association (SMA), posed the question to the room at the Institute of Scrap Recycling Industries (ISRI)’s recent Commodities Roundtable in Chicago: Do trade cases really work? He scrolled through three example cases.

Case #1: Oil country tubular goods imports from South Korea: Imports were steadily rising, then in 2013, the case was filed when the damage was done, but then the data showed that the filing helped stem the tide. However, in 2014, we saw another spike in OCTG. Did that work? Probably not.

Case #2: Chinese wire rod: Filed in 2014, that one worked out pretty well, with imports dropping off after the preliminary ruling. (See chart below.) 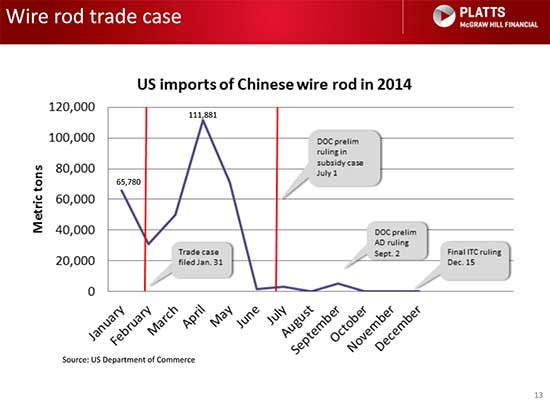 Case #3. Rebar from Turkey and Mexico: There were affirmative rulings for both. The Mexico duties ended up being huge, while Turkey’s were negligible. Therefore, Turkey kept exporting to the US, so one could argue that this case didn’t work out that hot. (See chart below.) 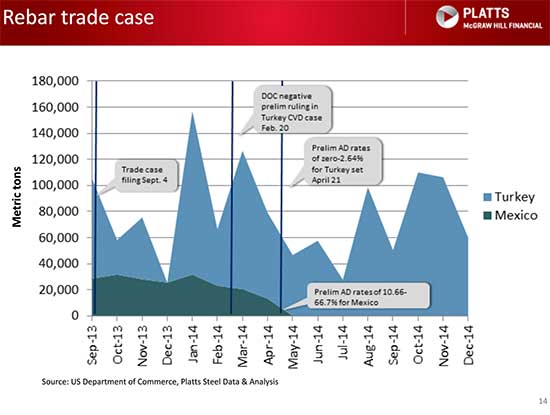 So trade cases are never a sure thing, not quite a panacea to US producers’ woes. Bell’s conclusion was that trade cases only work if appropriate remedies are implemented. Ultimately, we must have a Commerce Department willing to pursue that. But with more cases being filed than ever, Commerce is understaffed – and it shows.

Effect on US Manufacturers, Metals Buyers

For downstream manufacturers in the US, losing out on supply options is an issue.

Unlike Canada, according to Platts’ Tran, the US has no public interest inquiry that can occur. For example, in the Canadian rebar trade case, British Columbian rebar users told the Canadian government, “Hey, we need West Coast-imported rebar to keep coming in, because for us to get rebar from the other side of the country, it’s [essentially] too expensive and too slow,” Tran said in the webinar.

So, Canada is currently assessing whether carrying through that trade case will make sense for them. (Tran said they just postponed the determination on that case, and is interested to see how it turns out. As far as she knows, there is no such provision in US law.)

As for metal buyers, Jennifer Diggins of Nucor – a steel producer, not a downstream buyer – put it very well in an interview with MetalMiner’s executive editor, Lisa Reisman. Diggins stressed the impact of China’s heavily subsidized state-owned enterprises (SOEs), and that ultimately customers would have no choice but to buy from those types of steel companies if they put US and other producers out of business.

“There will be no diversity in the marketplace – no competition,” Diggins said. “Just one source of state-owned suppliers. And they won’t be accountable to their customers for their success. The only entity they will have to keep happy is their government’s bureaucracy. In that scenario, you can bet the absurdly low prices will disappear with no guarantee that customers will be getting a quality product.”

That’s something that Mario Longhi and many others in the industry can get behind.

The monthly Raw Steels MMI® held steady at 82, fully 18 points below the January 2012 reading of 100. Although the LME steel billet price rose slightly, the underlying dynamics of the […]

Will this unfair-trade, anti-dumping case against steel companies from India and eight other nations see a positive outcome, or just delay oil and gas operations? So far, there’s no consensus […]

Don’t worry, metal buyers – MetalMiner hasn’t gotten caught up in the Libor scandal as others have. The WSJ reported that “CRU officials say they hope the move [to audit […]