by Christopher Rivituso on November 3, 2021

Tata Steel Europe is hot starting a new power plant at its Port Talbot plant, in Wales, which will cut CO2 emissions by almost 44,000 metric tons per year, the company said. 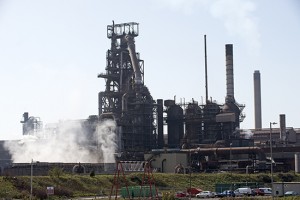 The 30 MW generator will use gases from Port Talbot’s coking oven complex as well as from its two operating blast furnaces to create steam that will turn turbines within the generator. It also allows the flats producer to avoid flaring off those gases, a process that has a negative environmental impact, the company said last week.

The new generator carries a £37 million ($50.6 million) price tag. It is the fourth of its kind at Port Talbot and will power various parts of the plant, a company spokesman said.

It also comes on stream at a time when energy costs are sharply rising in Europe.

The plant can now generate up to 70% of its own energy.

Port Talbot has one coke oven set with 85 separate ovens as well as two blast furnaces with a pig iron capacity of 5.3 million metric tons per year.

The site also has one convertor shop with two basic oxygen furnaces that can pour up to 6 million metric tons of crude steel annually.

That steel is cast into slabs for rolling into hot and cold rolled coil at the site. Port Talbot also sends the cold rolled coil to the Llanwern plant as feedstock to produce hot dipped galvanized coil for the auto sector.

Continuous caster No. 23 began production on the same day. It can produce up 2.7 million metric tons per annum of slab up to 180 millimeters in thickness and 385 millimeters in width, a second source told MetalMiner.

It was not immediately clear at what percentage of capacity the new concaster would operate or what it would do with the slabs. One source noted that IJmuiden already has two operating slab casters at the site. Addition of the third caster brings estimated total production capacity for the semi-finished flats to 9 million metric tons per year at the Dutch plant.

U.K.-headquartered equipment supplier Primetals was the contractor for the IJmuiden new casting machine, which can also automatically adjust the casting process in real time.

IJmuiden, which is on the North Sea coast, is about 40 kilometers from the Netherlands’ official capital of Amsterdam.