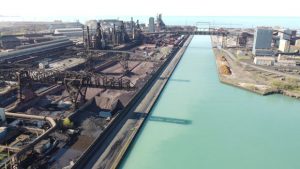 END_OF_DOCUMENT_TOKEN_TO_BE_REPLACED

Most of the mainstream press’ coverage of U.S. Steel’s giant Mon Valley plant upgrade project cancelation focuses on several issues, from permitting delays to U.S. Steel stating that a competing steelmaker plans to build a facility in another state.

The project, an anticipated $1.5 billion investment across the Mon Valley works sites, would have added an endless casting and rolling facility at the Edgar Thomson plant. In addition, it would have created a cogeneration facility at its Clairton Plant.

The combined investments would have allowed U.S. Steel to produce thin gauge HRC at CRC gauges.

Buying organizations would have the opportunity to pay less per ton for this material than the cold rolled coil alternative. In other words, the price of steel from this line would have likely fallen somewhere between hot rolled and cold rolled prices.

Today, only Nucor and Steel Dynamics have this kind of capability.

In theory, these innovations would have helped U.S. Steel boost margins for HRC and garner rapid market acceptance for those premium products.

END_OF_DOCUMENT_TOKEN_TO_BE_REPLACED

The Raw Steels Monthly Metals Index (MMI) fell 7.2% this month, as steel prices in the basket were down across the board. 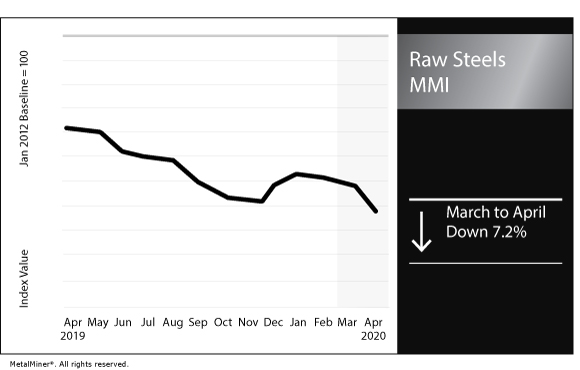 END_OF_DOCUMENT_TOKEN_TO_BE_REPLACED

What is driving the recent tentative trade agreements — and what does it all mean?

Trade remains critical to President Donald Trump for two reasons. For one, he loves chasing a deal more than anything else. Second, he has staked his reelection on his ability to deliver trade deals that improve the U.S.’s economic position, but not necessarily large trade wins.

Voters will likely see trade improvements as a win. It will take six months to see any actual results after the ratification and implementation of any deal.

And six months from now will show results just in time for the election.

How should metal buyers view the USMCA deal today?

Many companies have already taken steps to prepare for this deal.

In other words, businesses made changes to their operations in anticipation of the ratification of the deal.

The International Trade Commission estimates the deal will impact real GDP by 0.35%, or $68.2 billion. Some estimates suggest growth can reach 0.6%.

With some of the restrictions already lifted on steel and aluminum, it remains unclear how much growth has already occurred. U.S. dairy farmers, for instance, will gain access to certain segments of the Canadian market previously closed off due to strict regulations.

Any expansions or investments on the sidelines waiting for the final rules can now proceed as planned. However, that appears likely to have only a marginal impact on any of the countries involved.

Is the China trade deal the end to all trade deals?

The president has asked for sweeping change from China. Specifically, Trump has sought solutions to currency manipulation, intellectual property protection for U.S. companies, continued purchases of farm goods, the curbing of subsidies to state-owned companies, and access to the Chinese market for some U.S. tech companies (such as Google and Facebook).

It appears as though the deal will address some of these, particularly currency manipulation, rules around intellectual property and farm purchases. Critics say it doesn’t go far enough to address the state subsidies and blocking of U.S. tech companies.

In exchange, the U.S. will roll back some tariffs and not implement new ones. This could have an impact on hundreds of billions of dollars and would change trade patterns globally.

With the implementation of tariffs, companies developed alternative sources. Some of those sources have proved better than previous options and some less so. Trade between the U.S. and China will return, but not to pre-tariff levels. Any new, efficient supply chains will remain in place.

They say timing is everything

The flurry of activity likely comes down to the election cycle. At this point, the president can’t wait any longer and has to take the wins where he can get them.

These two trade deals could also force Europe to come to the table with its own agreement. If this happens, the “trade World War” will come to a cease-fire, with no country left financially crippled and also no monumental victor. This will provide global stability for several markets — always a positive sign.

The actual result of the individual trade deals appears marginal but still serves as an improvement on existing multidecade-long trade deals. The culmination of the deals could strengthen the world economy.

Tariffs created significant headwinds to growth in virtually all corners of the world. We know these trade deals will serve as Trump’s “big win.” His showmanship will ensure he will take credit, whether fact-based or otherwise.

The world will decipher fact from fiction during the second half of 2020.

Don Hauser joined MetalMiner’s commercial team in November 2019 after more than a decade as a cost management specialist and global supply base manager at John Deere.