Is Cooling China Steel Demand a Sign of Market Slowing?

Iron ore and coking coal prices have been driven up by insatiable demand from China. Steel producers the world over, but especially in Europe and Asia have suffered margin pressure due to rising iron prices driven not by their own regions’ demand but largely due to China’s. So it is perhaps a little ironic that just as European mills announce price increases to accommodate rising raw material costs, Chinese imports of iron ore and Chinese domestic steel prices begin to come off. As the following chart shows with data taken from MetalMiner IndX, Chinese domestic prices of steel products have been drifting lower since the beginning of this month. 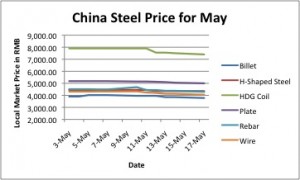 According to Credit Suisse, iron ore prices have also weakened over the period in response to lower demand from traders on the China spot market: 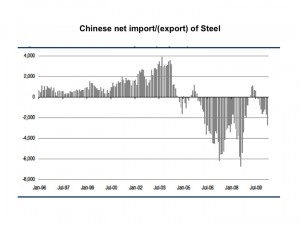 In addition, producers are increasingly turning to exports to maintain capacity utilization, although not yet to the levels seen in 2006-7, but certainly an about-turn from this time last year when China briefly returned to being an importer on the back of high domestic demand for steel products.

As further evidence of cooling demand, the bank reports that steel inventories in China have increased with a build-up of both long and flat products. 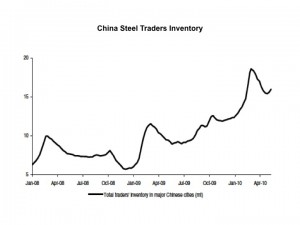 One could point to a weakening of steel scrap prices in the US as evidence the recovery is going through a global dip but we are reminded of the perversion of the old saying which goes, if China sneezes the world catches a cold. For the US or Europe to pause in its recovery is to be expected and the impact is limited, but if China (the world’s engine of growth at least for metals prices) to slow could have a significant impact on iron ore and coking coal prices, finished steels and non-ferrous metals. It would pay to track China’s steel prices, inventory and iron ore spot market buys over the next few weeks to see if this is a temporary lull or part of a longer term trend of cooling growth.

The rare earth metal industry is abuzz with fresh news. We’ve covered a few of these developments over the past couple of days. The big news of the week of course involves the creation of a new rare earth metal ETF from REE Fund that will make investments in over 30 rare earth metal companies from “mine to market.”  In addition, Dacha Capital announced in a press release that it had been accepted as a member of the Minor Metal Trade Association for its role in acquiring physical inventory of rare earth metals. Ordinarily (and when I first heard the news), I cringed at the thought of more financial services products coming into a space traditionally supported by the economics of industrial demand. Do we really need more speculation or financial types buying up physical inventory?

It reminds me of a conference session I ran a couple of weeks ago in which some industrial buyers of stainless steel wanted to know what if anything, industry could do to prevent “the speculators from “messing up metals markets. My response unfortunately was more of a “not much. But one of the most critical issues in rare earth metals markets involves pricing. The last major US rare earth metal producer, Molycorp, closed its doors in 2002 due to low prices from China. In other words, the US market couldn’t stay competitive based on import prices.

But therein lies the value of these ETFs and/or financial firms entering the market. By buying up inventory and taking investments in mining companies, and assuming they (the funds) can attract the capital (which we feel will happen), prices will likely increase. And when prices increase, the mining economics become a whole lot easier. We realize it stinks to be a palladium buyer right now if one isn’t hedged just as it is to be an aluminum buyer watching prices increase as stocks swell. But that lift in prices may provide the US rare earth metal industry with the help it needs to get a couple of these efforts underway, and ensure industrial buyers have more than one sourcing option. If there is anything I have learned since joining the metals industry it is this – though everyone thinks “price is king the reality is “security of supply reigns supreme.

As we said back at the beginning of March in a MetalMiner article, ferrochrome prices are being squeezed by a tight supply market limited by power shortages in South Africa, the largest producer. Even though there have been and will continue to be substantial re-starts around the world, HSBC estimates a 26 percent increase in capacity. Growing demand from the stainless steel industry is keeping pace and holds out the possibility of a market deficit next year if there are any further problems in South African power supply. The main outlet for ferrochrome is in stainless steel production and after three years of declining production and idling of mill capacity the market has now picked up across all geographic regions. A Nippon Steel & Sumikin Stainless (NSSC) official is quoted in a Reuters article as saying the European stainless industry would be back on full capacity through June of this year. NSSC is Japan’s biggest stainless steel maker. Stainless production is highly cyclical and is coming back strongly from a much reduced 2009 base over the coming year. HSBC is predicting a 9 percent year-over-year increase in ferrochrome production growth in 2010 and 6 percent in 2011 as a result of running at a deficit last year as well as robust stainless steel industry demand this year.

After rising in Q2 by 35c/lb from the previous quarter to $1.44 per lb, at their quarterly ferrochrome price fixing this month, NSCC say their primary concern was keeping a stable source of supply suggesting they too see supply constraints as an issue going forward. The European benchmark price for ferrochrome in the second quarter has increased to $1.36 per lb. This represents a 35 percent increase on the price of $1.01 per lb set in the January to March period. The benchmark was at $1.03 in the fourth quarter of 2009 and 89 cents in the third quarter, according to a Telegraph investor report.

Unless power worries in South Africa re-occur, we would expect this latest round of price increases to probably establish a new level for the rest of the year. At these levels, the current supply market situation is fairly well factored in along with tight but balanced stainless demand for 2010. But higher raw material costs will be reflected in stainless premiums slowing the migration from austenitic to ferritic grades and power supply issues remain a risk to the upside for prices later this year.

Most of the precious metals appear fairly straightforward (the picture doesn’t look too pretty for 2009) with one exception, gold. Now from a jewelry perspective, I’d always short gold (I personally am not a fan) but alas, that’s not the purpose of this analysis. Many of the major investment banks and research houses are bullish on gold, mostly due to gold serving as the safe haven asset in times of trouble. Banks like Citi predicted back in early December that gold would shoot to $2000/oz though we believe that prediction may be more based on Citi’s own precarious situation. Many are already saying that this recession is the worst since the end of WWII, and deeper than the recession of 1981-1982. But let’s take a look at a few of the key factors that impact gold prices.

For us at MetalMiner, we believe the factors influencing gold include the following: global interest rates, the value of the dollar, inflationary/deflationary cycles, industrial and jewelry demand and ETF investment. In support of gold prices, we have massive monetary stimulus and a lack of confidence in most global currencies. This is the safe haven argument. And in general, gold prices go up when interest rates go down and inflation increases. ETF’s also serve to boost gold prices. Prior to 2005, the dollar and gold traded in lockstep. But since 2005, gold has spiked even when the dollar has declined. So what is our call? We believe demand for jewelry will remain depressed as will industrial demand. Short term, deflation will be a bigger concern than inflation. However, inflation could become a big issue as soon as the economy picks up (perhaps in late 2009/2010). Global interest rates will continue to drop or be pushed lower to stimulate various economies. The dollar will likely remain “relatively” strong over the short term. The research firms believe ETF’s will overcome weak industrial demand pushing up prices. We tend to agree though we’ll temper our estimates with a lower average 2009 price because of deflationary concerns. So if Citi is at $2000, some of the analysts such as Morgan Stanley are at $900, we are slightly less enthusiastic putting our price estimates in the $800-900 range as the yearly average. END_OF_DOCUMENT_TOKEN_TO_BE_REPLACED