Rare earths and renewable energy are two sectors that almost every country races to dominate. One of these nations, France, takes serious strides towards this goal. Recently, the French government announced an emergency measures package to hasten renewable energy development. Rising infrastructure costs recently pushed the French government towards this decision. Along with the rest of the world, these are riding on the back of record inflation.

Only about 20% of France’s current electricity comes from renewable sources. This includes just 8% from wind energy. Clearly, the country needs to step up its efforts if it plans to meet its climate goals. However, the Russian invasion of Ukraine and the subsequent disruptions in conventional power generation have put a lot of pressure on the French energy ecosystem. In fact, the war in Ukraine has proven the primary catalyst towards this emergency green package.

As per government estimates, about 7 gigawatts of solar-generated electricity and 6 gigawatts of wind-generated electricity could be lost as renewable power projects try to manage rising costs. A statement by the energy transition ministry says the delays in developing new energy projects are largely due to inflation. As the price of construction materials surges, project costs are no longer covered by the state-guaranteed purchase price of electricity or biomethane.

Incidentally, France was the only European Union country to miss its target of having 23% of its energy come from renewable resources by 2020.

Get all the latest news on renewable energy, commodities, and more. Sign up for the FREE weekly MetalMiner newsletter here. 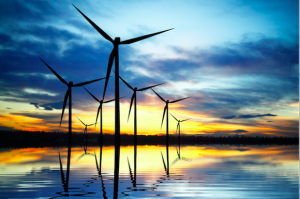 France Seems to Be Going “All In” on Wind Energy

In an effort to hurry up renewable energy development, France put several new initiatives in place. These include permitting renewable energy projects nearing completion to sell their electricity at higher rates for up to 18 months. This came a full year and a half before the contracts signed during tenders come into effect. Meanwhile, the country has lowered rates for installing solar panels and will keep them that way for the rest of 2022. Moreover, all renewable projects that have already won tenders can increase their outputs by up to 40% before project completion.

Along with these measures, the French government has already doubled the size of the planned Oléron offshore wind zone to 2 GW. In fact, the goal strives to generate 40 GW of offshore wind by 2050. According to the plan, this will be spread out across roughly 50 farms. Right now, the French government plans on generating between 21.8GW and 26GW by the end of next year.

In other news, English-owned global mining company Anglo American recently announced new green initiatives for its African facility. Specifically, the company will construct a series of on-site solar plants and off-site wind farms. The goal is to develop a renewable energy ecosystem for green hydrogen production throughout Southern Africa. It’s just one part of an overarching effort to decarbonize and reduce Scope 2 emissions while simultaneously improving the strength of local energy grids. The company feels that the move could unlock bigger opportunities by way of hydrogen corridors, transport routes, and supply chain infrastructure.

Keep yourself informed of all the latest global metal news with MetalMiner’s monthly MMI Report. Sign up here to begin receiving it completely FREE of charge. If you want a serious competitive edge in the metals industry, try a demo/tour of our revolutionary insights platform here.

On August 2, the United States officially added integrated steelmaker Magnitogorsk Iron & Steel (MMK) and its chairman Viktor Rashnikov to its list of sanctioned entities. The move is yet another punitive measure in response to Russia’s February invasion of Ukraine, in hopes that the steel manufacturing sanction will place more economic pain on Russia.

The announcement came from The Office of Foreign Assets Control (OFAC), part of the US Department of the Treasury. It was part of a new round of sanctions targeting individuals and entities close to the Kremlin. In this case, many of the targeted companies are major revenue generators for the Russian regime. The office added that Rashnikov had “also been sanctioned by Australia, Canada, the EU, Switzerland, and the UK.”

Get all the latest market news on the global steel market and other important metal commodities. Sign up for the FREE weekly MetalMiner newsletter here.

There’s no escaping the fact that Magnitogorsk Iron & Steel manufacturing plant is one of the largest steelmaking facilities in the world. According to OFAC, Magnitogorsk Iron & Steel remains another major taxpayer who helps keep the Russian government’s coffers full. As of the August 2 notice, parties have until September 1 to wind down any current transactions with MMK or its subsidiaries. This includes any asset in which the Russian company holds a 50% stake or more, be it directly or indirectly.

According to a February 28 report, MMK produced almost 14 million metric tonnes of crude steel last year. This represented a 17% increase year over year, which is hardly insignificant. Most of this is cast into billets and slabs for sale or rolled into various flats and longs products. The company also reported a full-year EBITDA of $4.29 billion, up by 188% from the nearly $1.5 billion it earned in 2020.

Need to know the best practices for contact negotiations when buying metals? Sign up for MetalMiner’s free August webinar here.

MMK Metalurji can also roll 2.3 million metric tons of HRC per year thanks to an electric arc furnace on site. However, it’s important to note that the hot end underwent testing in 2021 after being off stream since 2012 due to poor economic conditions. Either way, this represents more than just a little “collateral damage” in the steel market. However, as far as OFAC is concerned, any parties having business dealings with MMK Metalurji or any of its 50%-held assets have until January 31, 2023, to wind down transactions.

Stay on top of global steel trends and price forecasts. Request a 30-minute demo of the MetalMiner Insights platform now.

Insults Aside, Experts Predict the Move Will Have Minimal Effect

MMK said in an August 3 statement that it considers the sanctions against the plant and Rashnikov  “unreasonable and counterproductive.” “The company is studying the decision taken by the US authorities, assessing its potential effect and the possibility of challenging the imposed sanctions by all available means,” the company said.

However, according to one analyst, the sanctions will likely have little to no effect on the company. “MMK was very poorly represented on the US market,” the source said. “The distance from Magnitogorsk to the United States also makes logistics difficult. Whereas rail connections to China make it an attractive export market for the steelmaker.”

It makes a lot of sense. After all, MMK is in Chelyabinsk region, which averages about 2,650 kilometers (1,646 miles) from ports like St. Petersburg, Kaliningrad, and Novorossiysk. These are the nearest places where the Russian steel gets transferred to ships for further transport. And given these logistical demands, it’s not surprising that the US doesn’t see much of the company’s product.

It’s also worth noting that back in April, MMK announced plans to increase cooperation with markets in Central and Southeast Asia. Here, as in China, the risk of sanctions is virtually nonexistent.

Stay on top of all the latest global metal news with MetalMiner’s monthly MMI Report. Sign up here to begin receiving it completely FREE of charge. If you want a serious competitive edge in the metals industry, try a demo/tour of our revolutionary insights platform here.

UK Hopes to Get Ahead of Rare Earths Supply Problem

Gas Shortage: The Ramifications of Russian Oil and Gas Cutoffs