Coca-Cola Goes All Red Bull on Us with Slimmer Cans 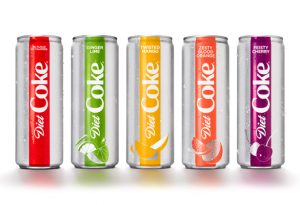 In two weeks, Diet Coke is introducing four new flavors: Ginger Lime, Feisty Cherry, Zesty Blood Orange and Twisted Mango. They will come in a skinnier silver can, reminiscent of Red Bull’s popular caffeinated hit, and, it is hoped, will reinvigorate Coke’s fortunes by appealing to a younger, millennial buyer, CNN Money reports.

The soft drinks market has been on the decline. According to the research group Cowen, diet soda sales fell 2% in the last three months of 2017.

The brand leaders, though, are falling faster.

Diet Coke sales fell by 4% and Diet Pepsi by 8%, while sales of the National Beverage Corp.’s LaCroix improved 43% in the sparkling and still flavored water category, as buyers switch not just to water but non-additive, more health-focused drinks. Diet Coke’s new offerings will be sold in slimmer tins, but the 12-ounce volume format remains the same – they will just rattle around irritatingly in your car cup-holder.

The move to slimmer cans is done for more profound reasons than just annoying me on long car journeys. The slimmer shape mimicks the younger image of successful brands like Red Bull — at least, that is Coke’s reasoning — but there may be a further advantage.

The slimmer cans give the impression of containing less fluid and research reported in the Washington Post suggests that may actually boost sales. David Just, a professor of behavioral economics at Cornell University, is quoted as saying their research performed over the years shows that people are incredibly responsive to labels. For example, participants, having been told that the food put in front of them was “double-size,” left 10 times as much food on their plates as those who were told their serving was “regular,” even though both groups were given the exact same amount of food.

The opposite, Just says, happens when servings are labelled as small. If products are marketed as minis, or are presented in a way that suggests they are somehow less, they can actually increase consumption.”

Much will depend, of course, on whether the new flavors find favor with consumers. Anecdotal evidence suggests they may not. Indeed it has to be said the firm’s previous attempts have not been a success, with new variances being withdrawn after just a couple of years.

It’s been a hard slog for reduced and sugar-free versions. Even with the tsunami of bad news about sugar, less than half, or 43%, of Coke sales are made up of Coca-Cola Zero Sugar, Diet Coke or Coca-Cola Life. As such, that raises the question as to how popular these new flavors will be, fancy cans or not.

For the canmakers, the new, slimmer cans will require an investment in tooling to meet Coke’s volumes but technologically will present no issues, as plenty of products are sold in similarly shaped containers already.

PREVIOUS POST:
Week in Review: Section 232, the Hyperloop and 2017 Global Steel Output
NEXT POST:
This Morning in Metals: Indian Crude Steel Production Up 6.2% in 2017