Home | Automotive | U.K. Automotive to Get a Boost to its Supply Chain
Industry News, Market Analysis

U.K. Automotive to Get a Boost to its Supply Chain

We have written before about the GFG Alliance and, in particular, within that Executive Chairman Sanjeev Gupta’s Liberty Group that has bought distressed steel and aluminum assets in the U.K. over the last 10 years. Last month, Gupta’s Liberty Group announced plans to add Europe’s largest aluminum smelter in Dunkerque, France, to its portfolio.

Liberty already owns the Liberty British Aluminium smelter at Fort William in Scotland (formerly owned by Rio Tinto). But in what may prove to be another timely move, Liberty has announced plans to build a 2 million a year alloy wheelmaking production facility alongside the Fort Williams smelter, scheduled to begin production by 2020. We say “timely” because the U.K. is expected to exit the E.U. by March 30, 2019; although transition periods have been discussed, it is not clear what the tariff framework will be during any extension beyond that March date. 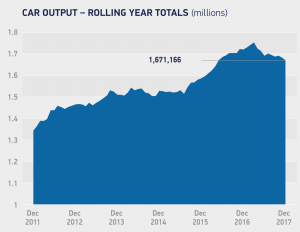 Source: The Society of Motor Manufacturers and Traders (SMMT)

The U.K. automotive industry is one of few success stories, exporting some 80% of its 1.67 million cars last year and nearly 55% of its 2.7 million engines. As the above graph from SMMT shows, output is down a little from last year due to a double whammy of uncertainty around the economy’s future due to Brexit and a general move away from diesel engines following the emissions scandal (and what that may mean in terms of changes in government policy).

GFG’s move is timely because the U.K. imports much of its alloy wheels at the moment; the imposition of tariffs will mean domestic suppliers will have a distinct advantage.

In GFG’s case, this will be enhanced by the location. With the smelter right next door, Liberty Group intends to ship liquid metal from the smelter directly into the casting works, giving the economics a distinct advantage over plants elsewhere that buy in primary metal ingot and remelt it.

The top 10 makers of alloy wheels are either global brands like Enkei and Ronal, or national champions like Germany’s Borbet or America’s Arconic and Superior, or China’s Foshan Nanhai Zhongnan Aluminum Wheel Co. Although the U.K. produces 1.67 million cars, its supply chain is highly integrated with continental Europe, a supply arrangement that is clearly at risk post-Brexit with no vision of what a post-Brexit landscape would look like — or what kind of post-Brexit landscape the British government even wants.

According to U.K. government websites, alloy wheels for automotive application represent the fifth-most attractive opportunity for domestic supply after components like engine castings, steering systems and engine forgings. Alloy wheels are valued as a £210 million per annum supply opportunity. GFG’s plant is planned to produce some 2 million wheels, or a fifth of all U.K. demand.

Regardless of the tariff environment after Brexit, the new plant appears to make a solid financial case. However, if as expected the British government manages to make a complete hash of a “free trade deal” — that is, they don’t get one — the plant’s credentials look even more compelling.