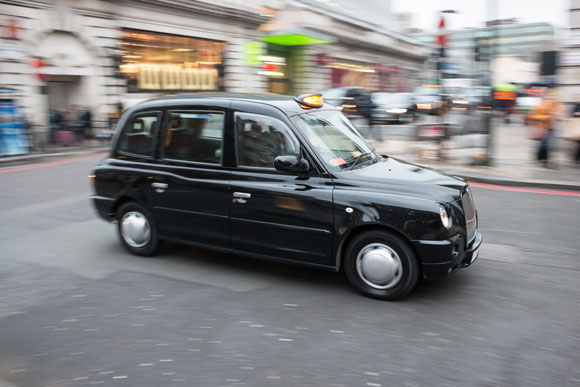 The fight is on in the streets of London between two rival manufacturers of the iconic London black cab.

Earlier this year the London High Court cleared an appeal made by the Chinese-owned London Electric Vehicle Company (LEVC) against British Metrocab that had delayed the launch of Metrocab’s new electric model by three years. Both companies are racing to create scale and secure market share of London’s black taxi fleet.

According to the Financial Times, the city’s transport authority Transport for London (TfL) announced plans in 2014 that require cabs to be zero-emissions capable by 2033. The 24,000 diesel-powered black taxi fleet accounts for almost one-fifth of the city’s vehicle nitrogen oxide emissions, the Financial Times reports. Replacing this fleet over the next 15 years is said to be worth £1.2 billion ($1.7 billion) and for the successful company would provide a springboard for a potentially lucrative export market.

Although LEVC, formerly called the London Taxi Company, has a three-year head start over Metrocab, it has struggled to get its manufacturing operation off the ground as quickly as it had hoped.

LEVC is owned by the Chinese group Geely, owners of Volvo cars, sports car maker Lotus, and with a stake in Mercedes-Benz.

Metrocab, on the other hand, is a family-owned minnow in comparison but ironically is contracting the manufacture of its vehicles to another British firm in Coventry called Cad Cam, which has secured £100m ($140 million) of funding from another Chinese company, Red Sun — it would seem increasingly all roads lead to Beijing.

The London Taxi Drivers Association welcome Metrocab’s success at the appeals court, saying “we think the more competition the better, right now we have to buy electric and we only have one choice, a monopoly is no good for anyone.”

Anyone who has traveled in one of London’s black cabs will have immediately noticed the slightly strange design compared to cabs everywhere else in the world. This is because London’s cabs, whether diesel or electric, face a unique set of requirements, the Financial Times notes.

All London black cabs must be capable of wheelchair access and have a turning circle of just 24 feet. More comically they must have sufficient headroom for a 5-foot-8 tall man to sit in the rear seat wearing a top hat – well, it is London.

Performance-wise the two companies’ current models are reasonably similar, as the graphic below shows. 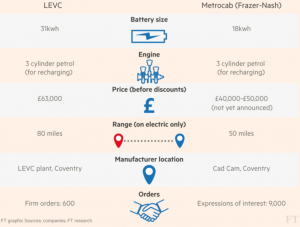 Both firms claim the 50- to 80-mile range on all electric is sufficient for a day’s operation within central London. However, based on the dodgy claims made by most car manufacturers on range (both ICE and EV, it must be said) we have our doubts. It is to be hoped that further technological development extends this range in the coming years.

There has been talk of London banning all diesel cars from the city center, an option being explored in other European cities seeking to reduce atmospheric pollution. Realistically, it would be hypocritical of the capital to ban diesel cars while it continued to permit 24,000 diesel-powered taxis.

2033 may seem a long way off, but TfL’s plans are at least a step in the right direction. The competition between LEVC, Metrocab and other challengers (such as Nissan) can only spur innovation and help drive down costs.

PREVIOUS POST:
This Morning in Metals: China Responds With $3B in Tariffs on U.S. Goods
NEXT POST:
Is the Hong Kong Property Market Going to be the First Casualty of Fed Tightening?