Rising oil prices were seen last year as a positive result of growing global growth and recovery, but a combination of factors are turning this benign view into a more sinister scenario.
Need buying strategies for steel? Try two free months of MetalMiner’s Outlook
On the supply side, the combined efforts of OPEC and Russia, leaky as the agreement has been, have managed to reduce the global oil surplus in just 18 months to bring the market largely into balance. As a result, oil prices have gradually risen during the period. It’s a trend most observers have been sanguine about, believing the U.S.’s tight oil producers, encouraged by rising prices, will increase output to ensure ample supply and keep a lid on oil prices getting ahead of themselves. 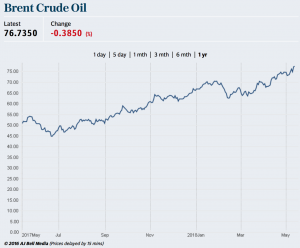 But that benign view had not taken account of President Trump’s decision to rip up the Iran nuclear deal and, as a result, to reinstate sanctions, a move that will take place in two phases to give firms time to adjust.
According to The Telegraph, this will be done in two stages, on Aug. 6 and Nov. 4, allowing 90- and 180-day wind-down periods. In addition the Treasury is to re-list Iranian individuals and entities in the Specially Designated Nationals (SDN) list, thus revoking special licenses and exceptions previously granted to individuals and companies to deal with Iran, making it all but impossible for firms with a U.S. presence or needing dollar clearing to deal with them.
Lastly, Iran’s crude oil sales will be limited under the National Defense Authorization Act of 2012, as the U.S. departments of State, Energy and Treasury will allow ongoing but reduced purchases of oil from Iran, termed “significant reduction exceptions” on a country-by-country basis if they demonstrate a commitment to substantially decrease oil purchases (usually at least a 20% reduction).
As a result, Iran’s exports this year are likely to take a 500,000-barrel-per-day hit, from the country’s roughly 2,200,000 bpd current exports. The Telegraph speculates this could rise to 750,000 bpd next year as sanctions bite deeper. 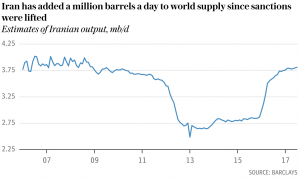 Iran is not the only threat to supply. The ongoing implosion in Venezuela’s output, as spare parts run out and infrastructure collapses, also figures into the equation. So far, this has taken some 700,000 bpd out of global markets, the news source reports, with no sign of the trend slowing and no quick fix, even if a revolution overthrows the Maduro regime. 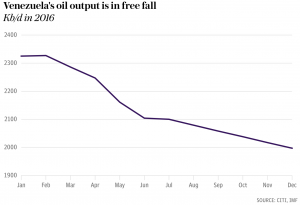 Meanwhile, the global oil industry investment collapse since 2014 following the plunge in oil prices has, like a juggernaut, taken time to impact output.
Output from conventional projects has until now been rising as projects started at the beginning of the decade have come onstream, but the cycle is turning — The Telegraph reports output will fall precipitously, by 1.5 million bpd in 2019.
So, what of all that replacement supply from the U.S. shale market?
Rig counts have predictably risen and output is up, but both U.S. tight oil and the Alberta tar sands are facing an infrastructure squeeze. Limited pipeline capacity and the failure to build new ones is holding back supply from the West Texas and Tar Sands regions. The U.S. is now becoming the world’s largest oil producer, on target to produce 12 million bpd next year by Energy Information Administration (EIA) estimates. However, that will not insulate the U.S. from higher oil prices, as the country is now exporting significant quantities of distillates and growing volumes of crude.
Saudi pledges to maintain stability in the oil markets should be taken with a pinch of salt. They have equally said they do not see any problem with a $100/barrel oil price and so are unlikely to raise their own production to ease the pain for everyone else until prices are well into triple digits.
Want to see an Aluminum Price forecast? Take a free trial!
The Telegraph quotes Westbeck Capital, which says “We believe an oil price shock is looming as early as 2019 as several elements combine to form a ‘perfect storm’,” predicting $100 crude in short order, with $150 coming into sight, as the world faces a crunch all too reminiscent of July 2008.