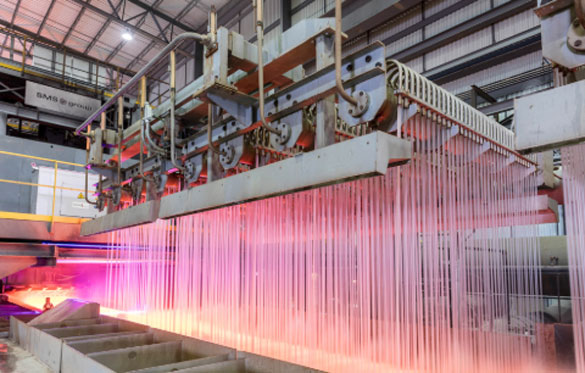 The recent AI Summit at the White House brought together industry figures in the world of artificial intelligence (AI), a term that has no doubt picked up momentum from something as the province of a futuristic, far-off world to something more nearly attainable.

According to a White House release, the summit last month included “more than 100 senior government officials, technical experts from top academic institutions, heads of industrial research labs, and American business leaders who are adopting AI technologies to benefit their customers, workers, and shareholders.”

When thinking of AI, many conjure up images of intelligent robots or programs like IBM’s Watson (which, if you’ll remember, grew in prominence after competing against “Jeopardy!” champions in 2011).

But what about applications for AI in the metals industry? Well, who better to ask than Noodle.ai CEO Stephen Pratt, who worked on the IBM computer system and now works with companies like Big River Steel to streamline manufacturing processes with the power of AI.

Based in Osceola, Arkansas, Big River Steel teamed up with Noodle.ai — founded in 2016 and headquartered in San Francisco — in what they billed the world’s first “learning” steel mill.

In a recent phone conversation with MetalMiner, Pratt talked about his background, the founding of Noodle.ai, the partnership with Big River Steel and the future of AI.

Pratt, who has bachelor’s and master’s degrees in engineering from Northwestern University and The George Washington University, founded Infosys Consulting, has been a senior partner at Deloitte Consulting and a technology and a strategy consultant for Booz, Allen & Hamilton before a stint working on IBM’s Watson computing system.

“The idea was to bring the power of artificial intelligence to dramatically improve the operations of companies through sensing patterns in their business that they couldn’t sense before, predicting what was likely to happen in the future so they could avoid risk and take advantage of opportunities,” Pratt said. “And then, to make recommendations on what they should do in their businesses, much akin to a computer chess game calculates all the moves and tells the computer what move to make.”

Pratt said given the partnership, he was proud Big River Steel as among the companies invited to the White House’s AI Summit.

“I think it was a recognition that it’s this partnership between Silicon Valley and the American heartland and steel production, that was doing really innovative things in steel manufacturing,” he said. “Just the fact that Big River Steel was invited, I think was a really big deal. Most of the other companies that were there were technology companies and Big River Steel was one of the very few actual manufacturing companies that was there.”

Older mills that are not equipped with such sensors operate by “rules of thumb,” Pratt said, while newer mills with such sensors can utilize data to inform processes and make better decisions based on how the mill has historically operated.

“We’ve done quite a few things at Big River Steel,” Pratt said. “One of the applications that just went live was predicting the amount of energy that is going to be consumed by different what is called ‘heats,’ which is basically the manufacturing of steel.”

Big River Steel uses the electric arc furnace (EAF) process to produce steel; according to Pratt, when the EAF is operating, it uses more electricity than the Little Rock (the most populous city in the state, with a population of just under 200,000, according to Census Bureau estimates last year). That’s quite a bit of electricity, which means the mill needs to schedule its production in a way that does not stress the electrical grid.

Using AI, Pratt said they were able to determine patterns delineating how much electricity was being used at certain times, incorporating a number of factors, including but not limited to adjustments for the operating styles of various crews and even the weather.

The approach is, quite literally, futuristic.

“[A learning mill] can actually predict into the future how the mill will perform in the future so you can adjust things before they happen. Most of the other advanced mills, when something goes wrong, then you can adjust things or take a best guess. But in this case you have a supercomputer processing all this sensor data and saying ‘next Tuesday there’s likely to be a problem, so you need to avoid that.'”

Like Watson, the more data that is gathered, the smarter the computing system becomes, allowing for increasingly smarter decisions going forward.

“[It’s] much like a self-driving car,” Pratt said. “The more the algorithms are used to drive a car, the better it becomes because it sees more situations.”

Even the most advanced, carefully considered products can fail if they do not resonate with the target audience.

So, when it comes to a traditional industry like metals manufacturing, Pratt said it’s important to “speak their language.”

“Instead of talking about the detailed mathematics behind artificial intelligence, you talk about ‘how can we avoid caster breakouts, how can we optimize energy consumption, how can we do better prediction of on-time delivery of steel?’ These are the things they feel everyday.

“The barge is sitting there waiting for the steel to go in and they’re getting fined every hour that the barge has to sit there because they couldn’t predict very well when the steel is going to be produced.”

The Future of AI and Investment

Overall, Pratt said the U.S. remains the leader in AI, but that mantle is under threat from China.

“The Chinese government is out-investing the United States dramatically in artificial intelligence, research that’s supported by the government. Some of these technologies will require extraordinary commitment from the government to make happen. I think the power of the U.S. economy and entrepreneurs and things we’re doing at Noodle can make a big difference, but in China there’s a lot more of a tailwind with billions of dollars of government support for that.”

Nonetheless, Pratt praised the Summit and the bringing together of AI industry leaders, but had some suggestions for additions to future meetings, including the creation of a defined set of government-funded research projects on the technology and how it can help the U.S. economy, plus discussion on data privacy (he added the U.S. is behind Europe in this respect, with its recently implemented General Data Protection Regulation, or GDPR).

Despite all that, the future is bright for AI, Pratt said. Companies utilizing AI will start to outperform others, leading to greater profitability and quality of products, he argued.

In an era of globalization, it will be vital to be able to do “more with less” while producing less waste, he added.

“If you zoom way out … we’re going to have 11 billion people on the planet before we know it,” he said. “We better figure out to have a way to have less waste around the world — less food waste, less materials waste, less stuff just sitting in inventory [and] sitting in warehouses not being used.

“[AI] is a very big piece to the solution to global problems, both economically and in society.”