The Rare Earths Monthly Metals Index (MMI) dropped one point this month for a June reading of 19. 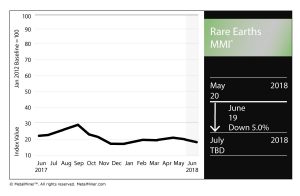 In April, researchers announced that a massive source of rare earths had been located just over 1,000 miles southeast of Tokyo. The catch? Current technology is not advanced enough to mine that underwater cache of valuable materials.

Nonetheless, a piece by WIRED showcases the technological buildup that could, one day, allow for such deposits to be mined.

Naturally, in a world that is increasingly looking to automation and artificial intelligence, robots figure into this technological scaling up.

As WIRED reports, several companies are competing to produce the technology that will allow for extraction of these deposits, while also attempting to limit deleterious environmental impacts to the ocean floor.

According to a report by Australian Mining, a pilot plant rare earths project by Northern Minerals is scheduled to be completed by June 30.

The Browns Range project is located in Western Australia.

Staying in the same part of the world, a recent New Zealand Herald piece delves into the search for rare-earth elements in the country.

According to the report, a study commissioned by the Ministry of Business, Innovation and Employment has identified several areas in the country that could have lithium.

”We now have a sound base to inform decisions on these strategic minerals which are widely used for energy storage in electric vehicles and other low emission technologies,” Megan Woods, the energy and resource minister, was quoted as saying.