Home | Exports | Argentina’s Latest Financial Crisis: Have We Been Here Before?
Market Analysis

Argentina’s Latest Financial Crisis: Have We Been Here Before? 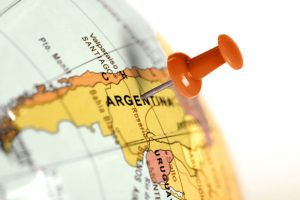 Argentina is not exactly Venezuela, but you could be forgiven for shaking your head at the sheer ineptitude of Argentinian politicians who have presided over yet another economic crisis and have been forced to go to the IMF yet again for a $50 billion bailout.

As Reuters observes, Argentina is struggling to break free from cyclical financial crises that have hit the country every decade over the past 60 years.

The most recent, in 2002, threw millions of middle-class Argentines into poverty and shook investor confidence in the commodities-reliant economy.

Not that the current administration caused the current morass — the fault for that lies with former President Cristina Fernández de Kirchner.

According to the BBC, her government, which was in power from 2007 until 2015, raised public spending, nationalized companies and heavily subsidized many items of daily life, ranging from utilities to football transmissions on television.

Worse, it controlled the exchange rate, which created all sorts of practical problems, such as giving rise to a black market for dollars and heavily distorting prices. The more conservative administration of President Mauricio Macri’s came into power promising fiscal responsibility and to stem the collapse of the newly freed up currency, but has consistently failed to lower inflation, which is the highest amongst G20 nations.

Since coming to power in 2015, Macri’s administration has failed to enact the economic reforms it promised the IMF, most of them aimed at curbing public spending and borrowing. The resulting spiral of inflation and draconian public spending cuts this year means wages are not keeping pace with prices, making most people poorer. 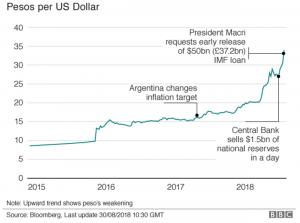 The country is facing inflation of over 31% by mid-2018, record unemployment and rapidly growing poverty marked by queues at soup kitchens, as the poor are unable to even feed themselves, which is leading to unrest.

Inflation is expected to end the year at over 40% despite stringent fiscal constraints the government is imposing. The government is following orthodox fiscal policies, partly under pressure from the IMF. Policies are in place to cut its ministries by more than 50% and decrease public spending by 4%. The goal is to advance the fiscal deficit reduction to zero next year, ahead of the earlier target of 2020. Even so, the peso has collapsed as investors have fled, devaluing by 52% just this year. In the last week alone, the currency lost 16% of its value.

So desperate is the situation that President Macri’s government has imposed a tariff on all exports — yes, you read that right, exports, including steel products.

Admitting it was a bad tariff and a desperate measure that ran counter to the normal intent to generate foreign currency through exports, Macri explained it was to avoid semi-finished products flooding out the country with the collapse of the peso. The government is fearful if it goes unchecked, the market will be devoid of raw materials and domestic manufacturing will collapse, adding to already rising unemployment and further dissuading investment.

It is hard to see a quick turnaround for Argentina; years of austerity and a harsh recession are likely on the table, with ongoing support from the IMF.

Following past real estate deals with the Macri family, President Trump is giving his verbal support to the Argentine president’s efforts, support that may prove vital if the current $50 billion does not prove sufficient to turn the economy around.