It’s good to talk — or so the oft-quoted phrase used in the mobile phone ads would have us believe.
Need buying strategies for steel? Request your two-month free trial of MetalMiner’s Outlook
And so it would seem from the market’s reaction to two meetings over the weekend.
The first was a temporary truce in the U.S.-China trade dispute called by President Donald Trump and President Xi Jinping following their meeting at the Group of 20 (G20) summit in Buenos Aires on Saturday.
The second, possibly brokered at the same venue, was between Vladimir Putin and Saudi Arabia’s Mohammed bin Salman, in which Russia agreed it would continue to cooperate with Saudi Arabia on managing oil production, according to the Financial Times.
Global stocks rallied on the news, bond prices fell, the Chinese renminbi rose and the dollar eased as markets reacted to the news that the U.S. had agreed not to increase tariffs on more than $200 billion of Chinese goods slated to take effect in January.
The tariff increase, from 10% to 25%, has been widely attributed to causing market uncertainty and a fall in stock and commodity prices for the last month. European and Asian stock markets bounced up this morning, up over 1% in Europe and nearly 3% in mainland China.
The onshore Chinese renminbi exchange rate was up 0.6% against the dollar this morning in a sharp correction as the following graph, courtesy of the Financial Times, shows. 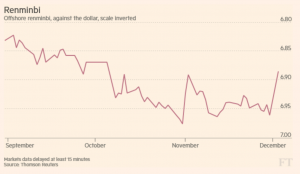 Imposition of the increased tariffs has been postponed until March, but it has to be said that little progress seems to have taken place on the issues which gave rise to the tariffs in the first place.
Both sides remain implacably opposed to issues of market access, intellectual property rights, cyber attacks and forced technology transfer concerns, according to the FT.
Metal prices reacted positively to the news, however, with three-month LME copper up nearly 2.5% as a return to more stable growth prospects looked more likely.
The devil remains, as they say, in the details.
Responsibility will now fall to an army of working-level officials on both sides to find solutions to these issues. The fact no progress has been made so far may be more down to political posturing than a complete lack of common ground. Nevertheless, China will be reluctant to admit it even practices any of the policies listed in the U.S. complaints being leveled against it, let alone publicly agree to change.
Is the market getting ahead of itself? Yes, probably. But while the bounce in sentiment is seen as positive, it is little more than a reversal of a previously negative trend.
MetalMiner’s Annual Outlook provides 2019 buying strategies for carbon steel
For a sustained rally in markets – metals or energy – much more progress needs to occur than a postponement of deadlines.