MetalMiner’s precious metals index, tracking a basket of platinum, palladium, gold and silver prices in several geographies across the globe, is now officially in a three-month uptrend this December after several months of declines. 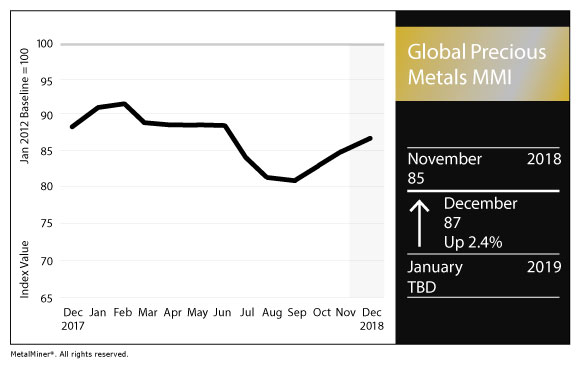 Need buying strategies for ferrous and non-ferrous metals? Try two free months of MetalMiner’s Outlook
The Global Precious Monthly Metals Index (MMI) came in at a value of 87 for its December 2018 reading, up 2.4% from 85 last month, continuing a steady upswing. To wit, this past September’s value — 81 — was the sub-index’s lowest point since January 2017.
The U.S. palladium bar price, as tracked by the MetalMiner IndX, keeps steamrolling higher. Itself in a four-month uptrend, that price clocked in at $1,192 per ounce at the beginning of the month, with reports that during the past 30 days, palladium actually outpriced gold for the first time in 16 years.
Meanwhile, platinum reversed its uptrend from last month, landing lower at $806 per ounce. This widens the platinum-palladium spread even further, forcing many analysts to wonder what will happen in 2019.

According to Reuters, the report stated that the platinum market will be oversupplied by half a million ounces for the balance of 2018 and into 2019.
The group “revised its forecast for oversupply this year to 505,000 ounces from 295,000 ounces, blaming weak demand for platinum jewelry, and said 2019 would see a surplus of 455,000 ounces.”
Also, WPIC’s head of research Trevor Raymond told Reuters that “the decline in demand from carmakers would slow next year while jewelry demand would expand for the first time since 2014, and consumption by industry and investors would grow strongly, lifting total demand by 2 percent,” according to the article.
The WPIC is not factoring in “significant substitution next year of palladium for platinum,” and expects use in industry to increase by 4% in 2019 after an 8% rise this year.
As for palladium, while supply from major producers including Russia and South Africa is not growing, global automotive palladium demand is expected to achieve a new record high in 2018 of around 8.5 million ounces, according to precious metals consultancy Metals Focus as reported by Reuters.
That could conspire to keep the high price bubble of the formerly junior PGM intact. However, that may not last.
“This increases the potential for correction,” Commerzbank is quoted as stating in a recent outlook report. “We expect a price correction [for palladium] to begin in the course of the first quarter of 2019.”
After correcting, the bank expects the price should to “resume its upswing,” forecasting a price of $1,100 per troy ounce by the end of 2019, it is quoted as saying.
Need buying strategies in 2019? MetalMiner’s Annual Outlook has what you need