International Tin Association: Use of Tin in Lithium-Ion Batteries Could Rise

According to recent research by the International Tin Association, tin could see increased use in lithium-ion batteries in the next decade.

“ITA tracks global R&D, patents and markets for tin and has identified a strongly growing interest in tin in energy materials and technologies, including lithium-ion batteries,” the association said in a release. “Tin has a wide range of technical properties that mean its uses extend to many areas of everyday life. For the same reason, it can adapt well to meet emerging needs for new materials that can generate, store and deliver tomorrow’s energy.

Per the release, ITA has identified “nine technology opportunities for tin in lithium-ion batteries, mainly in high-capacity anode electrode materials, but also in solid-state and cathode materials.”

Lithium-ion batteries are used in a wide variety of applications, from pacemakers to cellphones.

“It is concluded that if tin does gain market share, lithium-ion batteries could grow to represent a significant new tin use in the 2025-2030 timescale,” the ITA says in its release.

The idea of turning to tin for use in lithium-ion batteries isn’t new.

A 2012 Forbes article cites research by the Washington State University, in which they tested anodes made of tin (as opposed to graphite).

“In particular, the researchers have developed an anode made of tin, rather than the carbon used currently,” a 2012 university release about the research stated. “Rechargeable lithium ion batteries are made up of two electrodes, the cathode and an anode. During charging, the lithium ions move from the cathode to the anode. The anode holds the lithium ions and stores the battery’s energy. When the battery is used, the ions move from the anode to the cathode, discharging electrons and creating an electric circuit.
“The new tin anode has the potential to store almost three times the energy of graphite.”

According to the United States Geological Survey, in 2017 China led the way in tin production, producing 100,000 tons, followed by Indonesia and Myanmar (50,000 tons apiece).

For more information on the ITA research, visit the ITA website.

As for price, LME tin rode a downtrend from April 2018 through the end of November, before gradually picking up over the next 2 1/2 months. 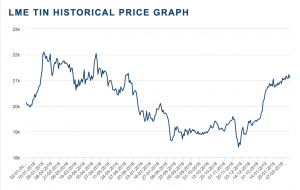 LME tin price since the beginning of 2018. Source: LME

According to another ITA release, a Tasmanian tin mine posted record production in January.

The Renison mine, a joint venture of Metals X and Yunnan Tin Group, produced 871 tons of tin in January.

“Australian mining appears to be ramping up, with increased tin output from Renison coinciding with new production at the Granville mine,” the ITA said. “Despite bush fires threatening production in January and forcing the mine to suspend operations for two days, Renison still achieved record output. This bears well for the future of the mine, which is due to report its updated resource estimate in the June quarter.”