U.S., China on the Bumpy Road That is Negotiation

Is President Donald Trump’s latest round of tweets and the resulting global stock market selloff just a negotiating ploy or is it the first signs the much-vaunted trade deal may not be going quite as smoothly as markets had obviously been pricing in?

The following VIX graph of volatility illustrates better than words how investors had been assuming the trade deal was a done deal in waiting. (Instead, the U.S. on Friday, May 10 raised tariffs on $200 billion in goods from China, upping the rate from 10% to 25%, to which China vowed to respond.) 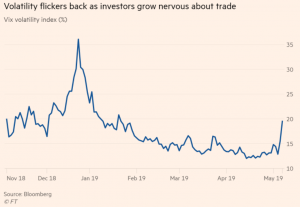 Source: Bloomberg via the Financial Times

Bolstered by stronger growth in both the U.S. and China during the first quarter, both sides seem unhelpfully bullish in the closing stages of the negotiations and, as such, rowing back on some previous commitments and playing hardball on still unresolved issues.

The U.S. S&P tumbled as much as 2.4% earlier last week, the Financial Times reported, before it clawed back some of the losses.The European FTSE Eurofirst 300 index ended last Tuesday down 1.4% — its biggest one-day drop since February — and slipped a further 0.1% on Wednesday.

Asian markets reacted similarly, resulting in the MSCI World index of global stock markets falling 1.7% last Tuesday, its second-biggest decline of 2019. Coming on the heels of the president’s suggestion that the United States could subject remaining Chinese goods exports (worth some $300 billion to $350 billion) to annual tariffs, in addition to the previously identified $200 billion, has worried investors this deal may not be the done deal they had been thinking.

According to the geopolitical advisory firm Stratfor, up to this point China has focused its concessions on directly addressing the countries’ trade imbalance by guaranteeing increased purchases of U.S. goods and opening market access, along with addressing some structural issues. But reports from the U.S. Chamber of Commerce representatives who have knowledge of the negotiations have indicated that the White House had been backing off its demands over some structural issues, including China’s industrial subsidies and cybertheft, the firm reports.

The biggest snags now appear to be over China’s resistance to U.S. demands for legal changes addressing intellectual property theft and its disagreement with the enforcement mechanisms attached to U.S. demands. It could be that Beijing, having failed to enforce intellectual property rules itself, fears agreeing with the U.S.’s dictation of the judgement and compliance of any such agreement and, by extension, any sanctions Washington decides to impose in the future into some kind of legal framework as being an unacceptable risk.

Put simply, Beijing fears it cannot police or ensure compliance at the local level within China to any agreement reached.

Nevertheless despite the unhelpful rhetoric and the pressure both Trump and Xi are no doubt facing from their core support — in Trump’s case to wring as many concessions out of China as originally demanded and in Xi’s case to give away as little as possible yet still achieve an agreement — and must be hampering both parties, progress does seem to be happening.

Maybe markets were a little too sanguine earlier this year to think it was a done deal, but nor should they be frightened off by a few tweets: an eventual deal is in both parties’ interest.