Automotive MMI: Record-Setting August for Some Automakers as Sales Surge

The Automotive Monthly Metals Index (MMI) fell one point this month for a September MMI reading of 85. 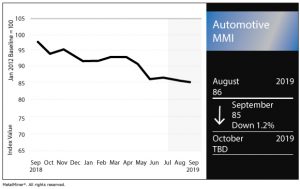 General Motors continues to report on a quarterly basis; in July, the automaker reported its second-quarter deliveries were down 1.5% on a year-over-year basis.

Meanwhile, August proved to be a record-setting month for Honda in the U.S. Honda sales surged 17.6% on a year-over-year basis, setting four all-time monthly sales records in the process, including for its model CR-V and Passport models. Car sales were up 19.8%, while truck sales increased 16%.

A joint forecast by J.D. Power and LMC Automotive indicated total August vehicle sales were expected to reach 1.62 million units, up 5.0% from August 2018.

“August will be a blockbuster month for the industry,” said Thomas King, senior vice president of J.D. Power’s data and analytics division. “Sales are expected to post the largest year-over-year gain since December 2016. Strong volumes coupled with higher average sales prices means that consumers will spend more purchasing new vehicles in August than any month in history.”

“Rising manufacturer incentives are contributing to August’s strong results, but the industry sales reporting calendar is primarily behind the large gains,” he continued. “This year, the Labor Day holiday will fall within the time period manufacturers use to report August sales, unlike typical years when the Labor Day weekend falls into September sales results. Labor Day is one of the most heavily shopped periods of the year, with consumers motivated by heavy discounts on outgoing model-year vehicles and new 2020 model-year vehicles arriving in showrooms. Last year, more than 237,000 vehicles were sold during the Friday-Monday holiday period.”

Earlier this week, the United Auto Workers union announced its members had voted overwhelmingly in favor of authorizing a strike, thus giving the union’s president and executive board the authority to call for a strike if contract negotiations with the Detroit Big 3 fail.

“No one goes into collective bargaining taking a strike lightly. But it is a key tool in the tool belt as our bargaining team sits across from the company,” UAW President Gary Jones said. “Ultimately, the company holds that destiny in their hands as they bargain. Clearly the UAW stood up for them in a very dark time, now that they are profitable it is time for them to stand up for all of us.”

According to the UAW, the vote percentages in favor of authorization checked in at:

On Tuesday, the UAW announced it had selected General Motors to begin the negotiating process.

“Mary Barra said from the outset of these talks that we will stand up as we tackle a changing industry,” Jones said of the GM CEO. “We are ready to stand strong for our future.”