The Rare Earths Monthly Metals Index (MMI) dropped one point for a November MMI reading of 20. 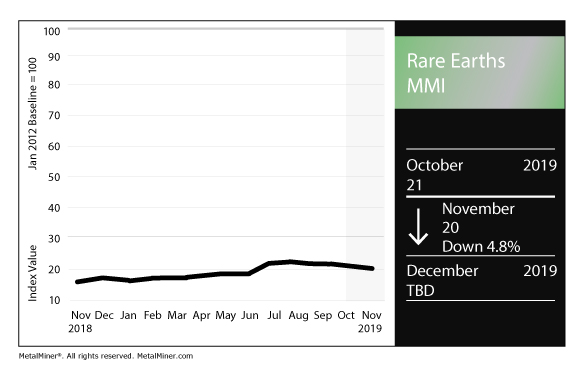 Australia-listed rare earths firm Lynas Corporation, the largest rare earths firm outside of China, announced Nov. 4 it had signed a memorandum of understanding (MOU) with Malaysia’s MARA Corporation through which the parties would “work collaboratively on several key projects, including attracting downstream industries and downstream customers to Malaysia.”

In August, the Malaysian government granted Lynas a six-month license renewal for its rare earths processing plant in the country. The decision came after months of back and forth between the firm and the government, primarily focused on the environmental impact of radioactive waste stemming from cracking and leaching processes at the plant.

“Lynas is delighted to be partnering with MARA Corporation on this exciting initiative,” Lynas CEO Amanda Lacaze said. “MARA Corporation is a strong and important local partner as we grow our global business from Malaysia. We have always strived to be an excellent foreign direct investor in Malaysia and this joint project is another way that we can facilitate economic development and jobs for Malaysians.”

Launched in 2016, MARA aims to create and develop “investments in key sectors to deliver scalable and sustainable financial returns that shape industries and deliver socio-economic outcomes,” according to its website.

“Creating economic opportunities in Malaysia, especially for the Malay and Bumiputra population is at the heart of MARA Corporation’s business,” said Akhramsyah Muammar Ubaidah Bin Sanusi, chairman of MARA Corporation. “We have followed the impressive progress of Lynas Malaysia as it has grown to become a major global player in the rare earth industry with a strong core of Malay technical professionals driving its progress. We are fortunate to have a key component of this supply chain already operating in Malaysia, and it is time to develop opportunities to further enhance Malaysia’s green and high-tech industries in line with the Pakatan Harapan government’s new Shared Prosperity Vision 2030.”

According to Lynas, it will work with MARA on a number of initiatives, including: attracting downstream industries and downstream customers to Malaysia; education and training initiatives; commercialization of NUF residues from the Lynas Malaysia plant, including making soil conditioner products available to Malay farmers; and design and fabrication work related to the Lynas 2025 Project.

Major economies — notably, the U.S. — are aiming to wean themselves off of dependence on China for rare earths, as China wields overwhelming control of the rare earths mining and processing sector.

However, among the other places with potentially promising sources of rare earths minerals is Australia, which has drawn interest from the U.S. in the form of potential partnerships.

Matt Canavan, Australia’s resources minister, was quoted by Reuters as saying the government might consider underwriting projects to develop the country’s reserves of rare earths minerals.

Canavan underscored the importance of developing those mineral reserves during a speech at the International Mining and Resources Conference late last month.

“The government is also supporting the broader minerals sector with its $100 million Exploring for the Future program,” Canavan said. “That program is using the latest seismic and aeromagnetic techniques to try to find new discoveries. Some great work has already been done especially in the south Nicholson Basin that straddles the Queensland and Northern Territory borders.

“This work is especially important because there has never been a greater need for the mining industry. The mining industry has always been important. The Ancient Roman historian Alexander Demandt once compiled 210 reasons for the fall of the Roman Empire. One of the 210 reasons was the depletion of its mineral resources, especially those at the ancient mines at Rio Tinto.

“Just like in Roman times, the future health of our economy and society will depend on continuing access to high quality mineral resources.”