View quotes and charts of the North American Stainless Steel Index and current pricing for Sheet, and Sheet
Articles on: Metal Prices

Before we head into the weekend, let’s take a look back at the week that was and the metals storylines here on MetalMiner, including aluminum prices, rising power costs and much more:

Renewables/GOES MMI: Despite renewables growth, coal and oil bounced back in 2021, IEA warns

The Renewables Monthly Metals Index (MMI) ticked up slightly for this month’s value. 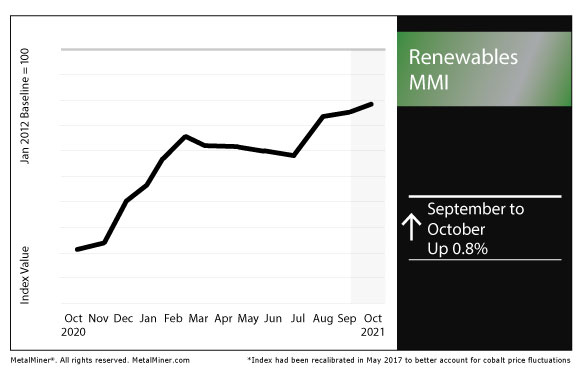 The International Energy Agency (IEA) recently released its 386-page World Energy Outlook 2021 report, in which it notes positive trends in renewable energy but setbacks in the form of recovering coal and oil use in 2021.

“The rapid but uneven economic recovery from last year’s Covid-induced recession is putting major strains on parts of today’s energy system, sparking sharp price rises in natural gas, coal and electricity markets,” the IEA reported. “For all the advances being made by renewables and electric mobility, 2021 is seeing a large rebound in coal and oil use. Largely for this reason, it is also seeing the second-largest annual increase in CO2 emissions in history.”

The IEA emphasized significant further investment is needed to reach the 1.5 degree stabilization goal laid out in the Net Zero Emissions by 2050 Scenario released in May 2021. The IEA said that transition requires “a surge in annual investment in clean energy projects and infrastructure to nearly USD 4 trillion” by 2030.

In many renewables applications, cost is a major obstacle, particularly for critical minerals or metals.

“Higher or more volatile prices for critical minerals such as lithium, cobalt, nickel, copper and rare earth elements could slow global progress towards a clean energy future or make it more costly,” the IEA added. “Price rallies for key minerals in 2021 could increase the costs of solar modules, wind turbines, electric vehicle (EV) batteries and power lines by 5-15%. If maintained over the period to 2030 in the NZE, this would add USD 700 billion to the investment required for these technologies.”

END_OF_DOCUMENT_TOKEN_TO_BE_REPLACED 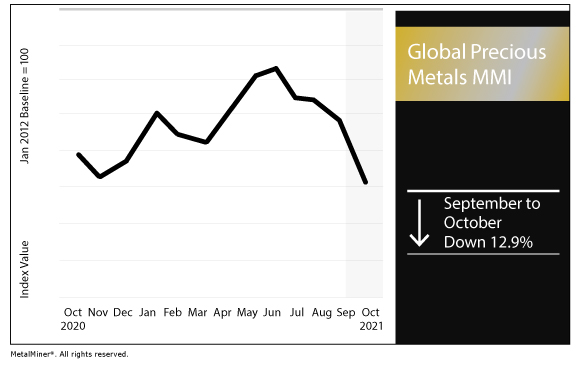 END_OF_DOCUMENT_TOKEN_TO_BE_REPLACED

Steel prices in India have nearly doubled over the last year, reflective of rising steel prices across the globe.

But for India, several factors such as a steep rise in the prices of raw material like iron ore — and of late, coking coal — have contributed to the steep hike.

Due to China’s decision to cut steel production and exports, India is also experiencing a price increase. High domestic demand had led China to remove rebates and impose export taxes on certain steel products this year to discourage exports. Steel production is also set to be capped in order to reduce carbon dioxide emissions.

Indian steel prices on the rise

India’s steel industry has been impacted by the price hike in various ways.

Protests have been lodged with the Indian government due to the shortage of raw materials. After China, India is the world’s second-largest steel-producing country. The price escalation in India started in the second half of 2020-21 and has continued nearly unabated since then.

Because it is steel, the price hike has had a cascading effect on consumer goods, construction and other activities, too.

Steel plants in the country have hiked steel prices by around $80 (Rs 6,000) per ton in just the last eight days.

CNBC TV18 reported JP Morgan India was of the view that Indian steel prices were still about 15% discounted to imported steel prices. When the busy season post festivals, starts in India, post-festive season, demand could go up, leading to some increase in local steel prices.

The sudden rise in steel demand once the COVID lockdown had ended caught Indian steel companies off guard. The uptick in steel consumption along with a renewed focus on infrastructure and government initiatives (such as “Make in India”) have led to an increase in steel demand.

In 2017, as part of the national steel policy, the Indian government announced India would try to reach 300 million tons per year year of crude steel production capacity by 2030.

Furthermore, a local coal crisis, which some experts predict could last for quarters, has hit the steel sector.

Like China, India is also staring at a power crisis due to coal shortage. Over 70% of India’s power still comes from coal-powered plants.

As of Oct. 6, 80% of India’s 135 coal-powered plants had less than eight days’ worth of supplies left, according to BloombergQuint.

There are several reasons for the coal shortage. Among them, India has reduced its investment in the fossil fuel as it gives priority to renewable energy to meet its climate change targets.

BloombergQuint cited JSW Steel Ltd. officials, who have gone on record to state that the coal shortage is likely to lead to steel price hikes for the next few quarters. 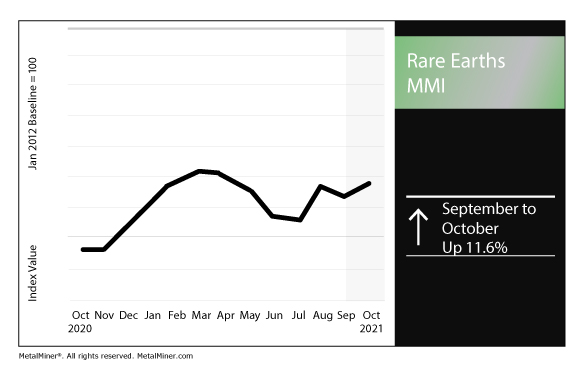 END_OF_DOCUMENT_TOKEN_TO_BE_REPLACED

The Stainless Monthly Metals Index (MMI) fell by 1.9% for this month’s reading. 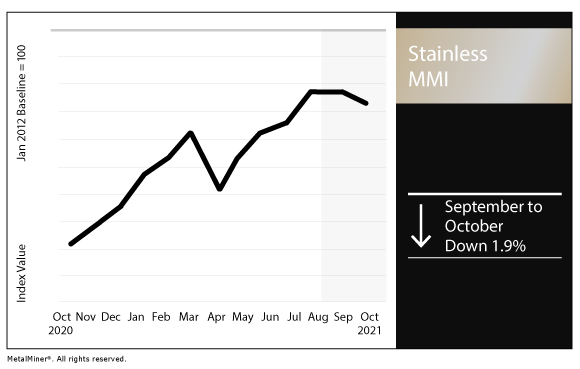 Base price and surcharge increases

Furthermore, alloy surcharges are increasing in October. NAS’ October alloy surcharge for 304 is $1.0641/lb, a decrease of $0.0038/lb compared to September.

U.S. stainless steel imports decreased by 6.7% from a value of $343.6 million to $320.5 million, according to US Census Bureau data from July to August.

While most forms of stainless steel imports declined, wire rods imports nearly doubled. Imports jumped by 57.6% to a value of $4.4 million during the same period.

END_OF_DOCUMENT_TOKEN_TO_BE_REPLACED

LME CEO weighs in on low-carbon aluminum during LME Week

“There have been calls for us to exclude high-carbon production, but we don’t think that’s the right thing to do because there simply would not be enough aluminum on the market,” Chamberlain said on Oct. 11 in an interview with Bloomberg Markets and Finance.

Prices on the LME would also be significantly higher than they are now, he warned.

LME aluminum price on the rise

Higher demand, plus production cuts in China, have helped to sharply boost benchmark aluminum prices over the past six months. The world has also faced supply chain disruptions as the global economy restarts after the COVID-19 pandemic.

Chamberlain could not say how much of a premium end-users would potentially pay on the base metal with a low-carbon footprint.

The LME’s announcement on the same day of its plans to collaborate with Düsseldorf-based spot trading platform Metalshub would help buyers to acquire the greener aluminum as well as to determine potential premiums, he said.

“What we foresee is a world where you have the LME to deal with high-level hedging … but there is a more digital way where you can then go and source specific parcels of metal with specific sustainability characteristics like low carbon,” Chamberlain stated.

Responding to a question over whether or not the exchange would potentially no longer accept “dirty” aluminum, Chamberlain stated that he did not rule it out in five to 10 years, as views on carbon vary.

“People have different views on the carbon footprint of our product, and that’s why we believe that disclosure and user choice is the right way to deal with it,” Chamberlain said.

“I certainly think the world could end up there,” where only lower-carbon is available, Chamberlain noted.

The bourse already does not accept metal that has exploited child labor or that has supported conflict financing as the world has decided that those are negative things, he added.

Chamberlain made the statements at the start of the LME Week, which is taking place in 2021 from Oct. 11-15. The event is an annual get-together for metal industry participants along the entire supply chain. The week includes seminars on trends and outlooks, along with networking sessions and the LME Dinner.

Events for the week in 2021 are more curtailed due to ongoing concerns over the COVID-19 global pandemic. 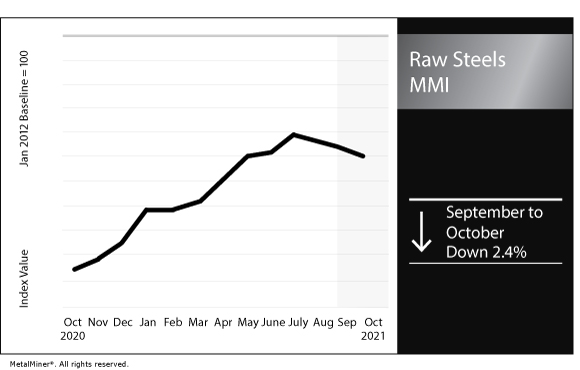 END_OF_DOCUMENT_TOKEN_TO_BE_REPLACED

The Aluminum Monthly Metals Index (MMI) went up by 3.1% this month, as all forms of aluminum jumped this month. 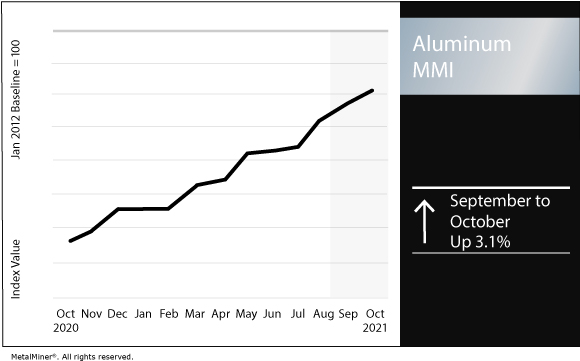 Historically high prices, increasing demand and production cuts in China have opened a window of opportunity for aluminum producers.

Alcoa announced it is restarting the Alumar aluminum smelter in Sao Luis, Brazil. Alcoa owns 60% of the smelter, while South32 owns 40%. Operations were suspended in 2015, as aluminum prices declined. Its restart could bring a total operating capacity of 447,000 metric tons, with the first molten metal expected in the second quarter of 2022.

With this planned restart, Alcoa will have approximately 80% of its 2.99 million metric tons of global aluminum smelting capacity in operation.

END_OF_DOCUMENT_TOKEN_TO_BE_REPLACED 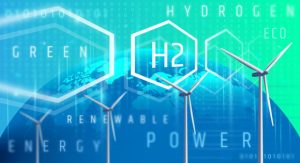