The Copper Monthly Metals Index (MMI) increased slightly this month to 73, compared to last month’s value of 71, with all copper prices in the index increasing mildly. 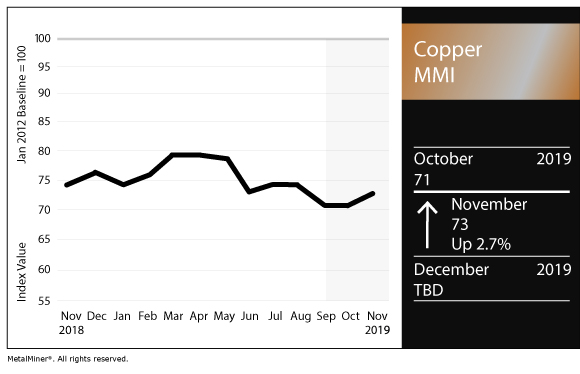 Overall, the LME copper price moved up in October but did not quite make it back to the $6,000/mt price level. 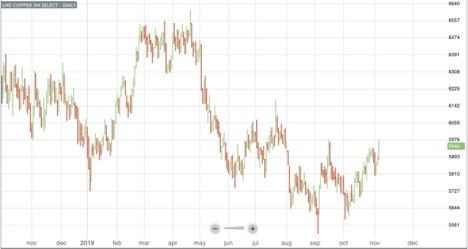 Even with the recent increase in prices, levels remain constrained, still hitting resistance around $6,000/mt. 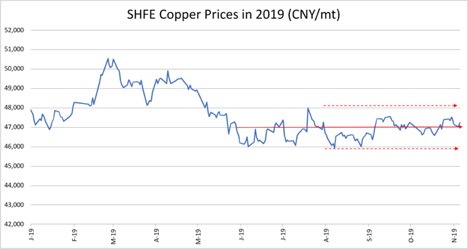 Still, a lack of stronger upward momentum for prices indicates a lack of copper demand.

Insiders indicated China’s top copper smelters plan to increase Q4 treatment and refining charges (TC/RCs) by 20% over Q3 rates, from $55 per ton to $66 per ton, according to Reuters. Rates have hit seven-year lows recently. Last year, during Q4 2018, charges were higher at $90 per ton.

The TC/RC rate gets set on an annual basis during November by the China Smelters Purchase Team (CSPT), which includes representation from most of China’s top smelters. The agreed-upon rates act as a spot processing price floor for CSPT members.

Some question whether the rate increase will stick at this time due to recent concentrate shortages, combined with some recent copper capacity expansion, leaving smelters to compete for concentrate through lower TC/RCs.

For instance, China’s Zijin Mining, recently increased capacity by 150,000 tons per year (a sizable increase). However, in early November, Zijin announced an expansion in its copper mine holdings through the acquisition of Freeport-McMoRan’s share of a copper-gold mine based in Serbia for $390 million, according to press reports.

The acquisition increases the company’s copper resources by 7.72 million tons, a boost of 15.6%, to a total of 57.24 million tons.

Additionally, growth in China looks set to slow further — down to 5.8% in 2020, according to the most recent IMF estimate.

China’s Official NBS Manufacturing PMI fell to 49.3 in October, compared to 49.8 in September, marking a sixth consecutive month of contraction.

Due to the nature of mining, supply disruptions from weather in any given year tend to be normal, rather than unusual.

Additionally, labor issues can result in mining disruptions on a fairly frequent basis.

This year proved no exception, as recent supply disruptions broadened the global deficit situation this year.

For example, Antofagasta PLC released a statement indicating copper production this year will range from 750,000-770,000 tons, compared to the previous estimate of 750,000-790,000 tons. The downward revision accounts for labor-related mining disruptions, mainly around the Los Pelambres mine, which reduced production by around 10,000 tons total.

However, new sources of supply will help alleviate concerns of longer-term deficits, particularly as demand for copper will continue to increase due to copper’s role as a battery metal for electric vehicles.

MetalMiner’s Stuart Burns recently pointed out Anglo American’s $5 billion copper project,  based in Quellaveco, Peru, likely holds a tremendous supply of the red metal (with the mine thought to have a 100-year life span).

While the exploration phase is not yet complete, ore grades look promising so far.

The company aims to start mining operations at this new location in 2022, with output of 330,000 tons per year expected during the first five years.

The Kamoa-Kakula mine, located in the Democratic Republic of the Congo, may result in as much as 700,000 tons per year  (mining there is slated to start in 2021).

With these new, large resources on the horizon, copper looks set to shift to surplus in the coming years.

As pointed out in this month’s MetalMiner Monthly Outlook for November, the International Copper Study Group (ICSG) expects this year’s deficit of 320,000 tons to shift to a surplus of around 280,000 in 2020.

Want an easier solution to tracking industrial metals prices and trade news? Request a demo of the MetalMiner Insights platform.

Copper prices increased across all index values this month, with Japan’s primary cash price increasing the most (by 4% to $6,148/mt).