Conventional wisdom has suggested we are headed for a significant oil surplus next year, with some commentators talking about a glut.

Even respected industry publications like OilPrice.com headlined “IEA Warns Of A Looming Oil Glut Ahead Of OPEC Meeting” this past week, as global oil demand growth has slowed due to weakening economic growth and the continued trade dispute between the United States and China.

The suggestion is OPEC and its partners, principally Russia, are going to have to do more than just rein in a few transgressors of previous quotas like Nigeria and Iraq if they are to keep supply roughly balanced and avoid significant price falls, CNBC reported.

The International Energy Agency’s (IEA) position is premised on projections that non-OPEC supply will rise faster than recovering demand. The IEA sees non-OPEC countries adding another 2.3 million barrels per day (bpd) to their supply in 2020, while global oil demand growth is expected to be around 1.2 million bpd.

But is that realistic?

Rig count is a fair measure of likely production growth, although not all wells need to be instantly brought onstream once they have been completed. Cost constraints, however, mean fracking firms rarely plug and store vast numbers of drilled wells.

There is a correlation between rig numbers as a measure of drilling activity and future production – particularly as shale oil wells have a limited life.

Those rig numbers have been falling — see the below graph from Oilprice.com — as we reported earlier this month: 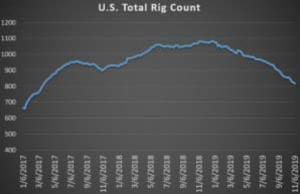 That comes partly as the investment market has been turning its back on the fracking industry. In general, the industry is struggling to access credit as easily as it did last year.

In 2018, the shale industry added about 2 million bpd. This year, it has added just a few hundred thousand in the first eight months of this year.

Finance is not expected to improve. Shale is not the hot topic it was – not least because of dire warnings of an oil glut (as demonstrated by the chart above).

In that respect, the U.S. shale industry is remarkably self-regulating. Activity and output, plus demand and supply, move in yearly cycles, rather than the decades of deep ocean or tar sands.

However, that doesn’t mean we are facing oil price rises. It may mean the price falls some in the industry fear may not be as likely or as deep as the IEA report suggests.