The Construction Monthly Metals Index (MMI) ticked up two points for a December MMI reading of 78. 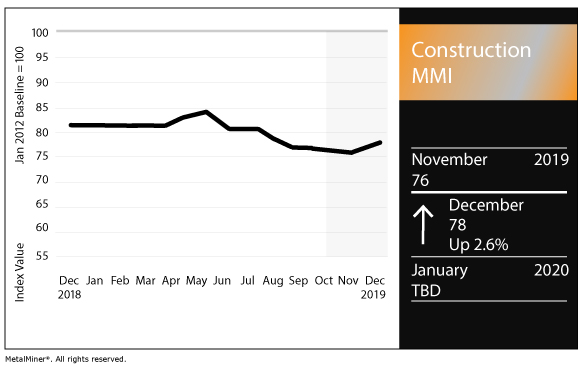 The Architecture Billings Index (ABI), produced by the American Institute of Architects, ticked up to 52.0 for October (any reading greater than 50 indicates billings growth).
The jump marks a shift from the year’s overall flat or downward-trending readings; the ABI checked in at 49.7 the previous month.
“In general, architecture firms remain cautiously optimistic about the future, despite ongoing concerns about a potential economic downturn in the next year,” this month’s ABI report stated. “Inquiries into new projects—and the value of new signed design contracts—were both also fairly strong this month, although slightly fewer firms reported growth in October than in September.”
However, “pockets of softness” remain, the report continued, namely in the Northeast and Midwest.
By region, the South led the way with an ABI reading of 55.5, followed by the West (51.3), Midwest (49.9) and Northeast (47.2).
This month’s survey polled those in the industry about the bottom line: profitability.
This month, 45% of survey respondents said they expected their firm’s net revenue to increase by at least 5% this year. However, 26% of respondents said they expected net revenue to decrease by at least 5%.

Pending home sales down in October

According to a recent report by the National Association of Realtors (NAR), pending home sales fell 1.7% in October after having increased the previous two months.
NAR’s Pending Home Sales Index dropped to 106.7 in October.
“While contract signings have decreased, the overall economic landscape remains favorable,” said Lawrence Yun, NAR’s chief economist. “Mortgage rates continue to be low at below 4% – which will attract buyers – employment levels are strong and many recession claims have dissipated.”
Keep up to date on everything going on in the world of trade and tariffs via MetalMiner’s Trade Resource Center.