The Rare Earths Monthly Metals Index (MMI) fell one point for an MMI reading of 19. 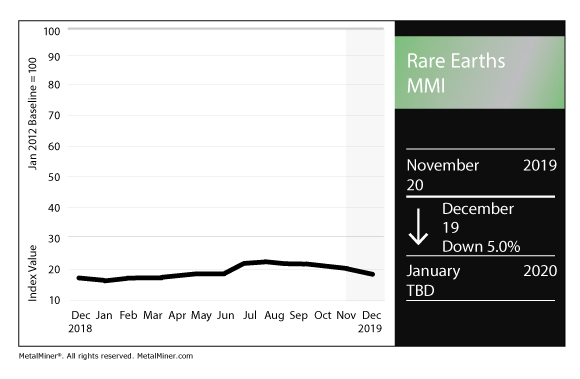 Lynas Corp., the world’s largest rare earths firm outside of China, announced this week it has selected the site for its new cracking and leaching plant.

The firm announced Kalgoorlie in Western Australia will be the site of the new location, touting it as the “first step in establishing a critical minerals hub” in the Goldfields region.

Lynas cited Kalgoorlie’s proximity to the Mount Weld mine, in addition to the region’s “rich history in the mining and processing industries,” as reasons for its decision to build the plant there.

“Lynas’ Kalgoorlie cracking and leaching plant will upgrade the Lynas Mt Weld rare earth concentrate that is currently exported to the Lynas rare earth processing facility in Malaysia,” the company said. “It is a further step towards delivering on the Australian Government’s Critical Minerals Strategy and the objective of the Western Australian Government for more downstream processing. Lynas will also explore opportunities for the next stage processing (upstream solvent extraction) in Western Australia.”

Earlier this year, the Malaysian government granted Lynas a six-month renewal of its license to operate in the country on the heels of discussions over disposal of radioactive waste generated from the plant.

In other Lynas news, the company will make an announcement by the end of February regarding funding for a rare earths plant in the U.S., Reuters reported.

In May, Lynas announced it had signed a memorandum of understanding with Texas-based Blue Line Corporation for a joint venture to build a rare earths separation facility in the U.S.

“Rare Earths separation capacity has been absent from the United States for several years, and the Lynas/Blue Line joint venture aims to fill a key gap in the United States supply chain,” Lynas said in May. “Rare Earths are essential inputs to high technology, high growth industries in the digital age. The Lynas/Blue Line joint venture (JV) will help ensure that U.S. companies have continued access to Rare Earth products by providing a U.S. based source.”

According to Lynas, the joint venture — which will be majority-owned by Lynas — will initially focus on heavy rare earths separation, including dysprosium and terbium, and could eventually cover separation of light rare earths like neodymium, praseodymium and lanthanum.

Amid the ongoing trade war with China, the U.S. has ramped up efforts to augment its rare earths supply chain in light of China’s overwhelming dominance of the global rare earths mining and processing sectors.

PREVIOUS POST:
Finally, Saudi Aramco’s IPO happens — to more of a damp squib than fanfare
NEXT POST:
India’s domestic steel demand fell in October for the first time in 7 months