Analysts are finding it hard to get a handle on what lies ahead for 2020 aluminum prices.

On the one hand, some well-respected sources, like Capital Economics, are suggesting in a recent report that prices will rise by year-end on the back of stronger demand, despite a return to production of temporarily shuttered production in Brazil and China during 2019 and new capacity coming onstream in Russia.

But Reuters disagrees, saying aluminum producers are actively reviewing their smelter portfolios. Norsk Hydro has announced output cuts and both Alcoa and Rio Tinto are conducting strategic reviews of their smelter divisions as producers globally chase each other down the cost curve.

Rusal also increased production by 2.7% following the ramp-up of new capacity at its Boguchansk smelter. Brazil’s Alunorte alumina refinery and accompanying smelter are now both back up to full production.

But the real threat to oversupply comes from China.

Flood damage curtailed capacity at China Hongqiao Group in August and an explosion closed potlines at Xinfa Group – both of which took months to bring back onstream in the second half of the year but are now back up and running.

Reuters reports Alcoa told analysts in a recent call it expects global growth to be just 1.4-2.4%, half the level seen just a few years ago. As such, it expects the market to be in surplus of between 600,000 and 1 million tons in 2020. 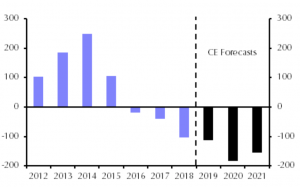 It is too early to tell whether the coronavirus epidemic in China will have a greater impact on demand than on supply.

So far, factories appear to be continuing to operate, but consumer demand will certainly be down in the short term. Of more concern for Western producers will be the level of Chinese semi-finished exports that have without doubt depressed prices globally for the last five years or more. Semis exports were down by 1.3% last year, Reuters reports, having risen by some 24% the year before.

What they hold for 2020 remains to be seen, but if CRU’s prediction of a 5% jump in smelter output is correct, some of that metal is likely to find its way into exports as semis (traditionally the relief valve for an oversupplied domestic market).

On balance, the competing dynamics appear to suggest aluminum will struggle to make headway in 2020.

However, whether Morgan Stanley’s bear case of $1,675 per metric ton is realized is another matter.