The Rare Earths Monthly Metals Index (MMI) surged by 30.6% for this month’s reading, as this week a pair of House representatives — a Democrat and Republican — introduced legislation that proposed a tax credit for domestic production of rare earth magnets. 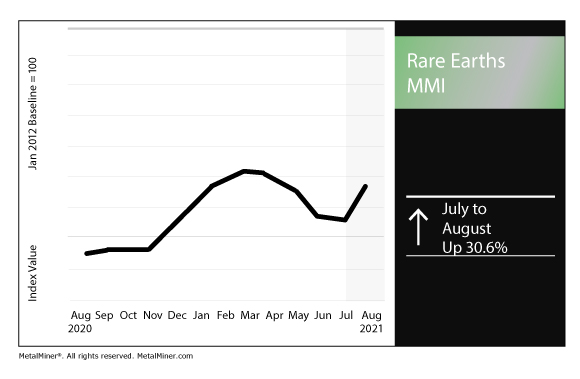 “These magnets are used in a wide variety of applications necessary for our modern economy, such as computer hard disks, cell phones, and MRIs,” a press release on Swalwell’s website stated. “They are also critical for certain for clean energy uses.  For example, 93 percent of all electric vehicles contain a powertrain driven by one of these magnets.”

The export total marked a slight drop from June’s 4,012 tons.

The firm reported quarterly sales revenue of A $185.9 million, up from A $110 million the previous quarter.

“NdPr market prices softened throughout the quarter, representing a slight correction on the increases in previous months,” CEO Amanda Lacaze said in the quarterly report. “Prices have strengthened again during July. The average China Domestic Price for NdPr was US$69.9/kg for the quarter. Demand for catalyst from the automotive and the fluid catalytic cracking (FCC) sectors is back to pre-COVID levels, which we see continuing in the near future. However, we remain alert to the effect the pandemic can have on end product demand, logistics and industrial supplies.”

“Detailed engineering and design work for the Heavy Rare Earths (HRE) facility was submitted to the U.S. Government in line with U.S. Department of Defense (DoD) Phase 1 milestones,” Lacaze added. “The DoD is now conducting a merit evaluation of the submission.”

In other Lynas news, the firm announced it had executed 1,020 meter deep core drilling at its Mt. Weld open pit mine.

“The exploration drilling program was designed to expand the ore body knowledge of Mt Weld by understanding the primary Rare Earth Elements mineralisation and the geology and structure of the carbonatite host rock,” Lynas reported. “The program was partially funded by WA government under the Exploration Incentive Scheme (EIS), 2020-2021.”

Lynas completed the drilling in June.

“We are excited about this deep exploration drillhole into the Mt Weld carbonatite,” Lacaze said. “The world will need increasing supplies of Rare Earths for many years to come. The Mt Weld orebody is recognised as one of the richest known deposits in Page 2 of 13 the world. Expanding our knowledge of this ore body is an essential part of ensuring Lynas continues to grow as a reliable supplier to global markets.”