Europe’s drive to reduce carbon emissions is taking many forms, from government support for R&D to investment in electric vehicle (EV) charging structures, hydrogen fuel technology and infrastructure, to name just a few.

So much for the carrots.

On the stick side, the E.U. has a carbon emissions trading scheme that grants credits to major emitters. However, it still raises the cost of electricity for both industrial and residential consumers.

Rising steel prices have sounded like a broken record. As we get closer to 2022, will we ever see them peak? Sign up for the next installment in the MetalMiner webinar series on Thursday, Sept. 30. MetalMiner experts will discuss the steel market outlook, contracting mechanisms, buying guidance and more. 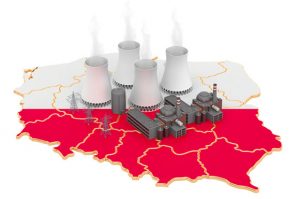 For those countries most reliant on coal-fired power production, the problem is most acute.

Poland, with 70% of its power generation dependant on coal, is one of the hardest hit.

It’s not surprising, then, that major consumers are looking to diversify their power sources.  However, rather than the obvious choice of natural gas — or renewables like wind and solar — Poland’s second-largest power consumer, copper producer KGHM, is turning to nuclear.

In an interview with the Financial Times, the firm outlined plans to partner with NuScale Power of the U.S. to develop an initial four small modular nuclear reactors (SMR). Each would be capable of producing 77 MW of power and would be operational from 2029.

In total, the project could entail up to 12 SMRs with a total installed capacity of 1 GW. The intention is to make the firm completely grid-independent and guarantee stable, low-cost power in the long term.

Renewables such as wind and sun have a role to play in Poland. However, lack of winter sun and mostly land-based wind turbines make the economics more challenging than in, say, sunny Spain or windy offshore Britain.

SMRs have been touted for years as a cheaper and certainly less contentious option than massive nuclear plants. For example, the U.K.’s Bradwell B will produce 2.2 GW if it ever becomes operational.

Much smaller, locally positioned SMRs could provide alternatives, not just for residential supply but for large industrial consumers like chemicals plants, steel mills and, as in this case, metal refiners. That is, of course, provided costs can be brought down to competitive levels.

An increasingly challenged European power landscape is finding that breakeven point is rising.

The bloc’s Emissions Trading Scheme, constrained supplies of natural gas and the cost associated with the variability of renewable power are contributing to that dynamic.

The British government is supporting reactor manufacturer Rolls-Royce in the commercialization of its small submarine reactors for land-based applications, such as NuScale’s reactors.

Rolls-Royce has decades of experience in building and operating such reactors. The main hurdles now are regulatory approval and factory production of the reactors, key if costs per KWhr are to come down to a viable level.

Clearly, KGHM feels the technology has sufficient potential to commit hard Euros to developing an initial four reactors. Poland is Europe’s largest mining country. The country has extensive production of zinc, lead and silver (in addition to copper).

As such, KGHM is unlikely to be the last metal refiner to seek such a novel solution to its power needs.